Warning: This post contains spoilers from On My Block‘s series finale. Read at your own risk.

With most of On My Block’s biggest mysteries revolved — including what really happened to Lil Ricky — the Core Four focused their attention on prom in the series finale.

Jamal chose his date after a bracket-style competition, Ruby got disastrous eyebrow highlights, Monse decided to be her own date before attending with Ruby and Jasmine, and Cesar (who turned down Monse’s promposal) went with Vero.

Ahead of the big event, a very tired Abuelita offered Jamal one last piece of advice: Get out of his head and have fun. Don’t go looking for purpose because his purpose will find him.

Jamal’s “Illuminati Nights” theme was not very clear, and everyone assumed it was Harry Potter —  much to his frustration. Meanwhile, Ruby and Jasmine got handsy on the dance floor, making Monse feel like the third wheel. It didn’t help that she had to watch Cesar dance with Vero all night. In the bathroom, Jasmine gave Monse one of her epic pep talks, and Monse extended an olive branch to Vero by offering her a tampon.

After being named Prom King over Jamal, Ruby decided to dance with Jasmine instead of Rona, who was named Prom Queen. The rest of the night found the core four laughing and having a good time together just like old times.

Earlier that night, the Spooky gnome found its way to Cesar, and now the Juanita gnome had found Jamal. However, Jamal was more interested in chasing after Kendra — the one who got away. He followed her outside and to the mysterious black car with red rims that had been tailing him all season. It turned out that Kendra worked for his favorite tech billionaire Noel Aroma, and they’d been surveilling him to see if he’s a right fit for the company. Jamal accepted Aroma’s offer to invent products for the wealthy genius, believing he’d finally found his purpose. 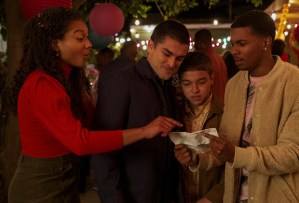 Cesar and Monse made peace. They didn’t get back together, but are back on good terms. Cesar finally saw a future for himself and decided to move to Portland to help raise his niece.

With the gang reunited, they decided to head back to Ruby’s place for an afterparty. However, they quickly learned that Abuelita passed away just after they left for prom. In a true testament to Abuelita’s free-spirited nature, her celebration of life was a party. Friends and loved ones gathered for drinking, smoking and reminiscing.

Monse revealed her plans to spend a year after high school writing a memoir, and Ruby delivered a “short and sweet” toast to his abuelita. A new Core Four peeked over the face at the OG gang, hinting at the forthcoming spinoff Freeridge, which has been greenlit at Netflix.

The series ended with the promise of a new mystery to solve. Abuelita left the crew a Rollerworld-like map, which likely leads to their lost money. As you’ll recall, the final flashback saw Marisol ask Oscar what he planned to do with the bag of money, and Oscar denied using any of it to finance his restaurant. Did he give it to Abuelita, who then left it for the Core Four to embark on one last adventure together? Seems very likely.

What did you think of On My Block’s series finale? Grade it in our poll, and sound off in the comments below.