KJ Smith, the actress who has played Andi for three seasons on the popular BET drama, is joining Power Book III: Raising Kanan in a recurring role for Season 2, our sister site Deadline reports. Smith, whose TV credits also include The Family Business and Giants, will play a character named Palomar.

A young mom, Palomar is Famous’ new neighbor, who is often mistaken for her daughter’s older sister instead of her mom. Sadly for her daughter Corinne, Palomar isn’t especially maternal, and instead of forbidding her child to hang out with Famous and Kanan, as any responsible parent would, she lets Corinne hang with the juvenile delinquents and wants to tag along. 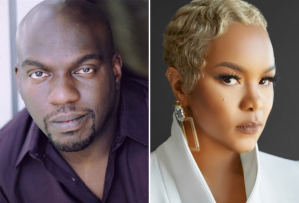 Dorsey will play Cartier “Duns” Fareed, a charismatic businessman who is looking to expand into less crowded markets like D.C. and Baltimore — and even into other types of businesses. The actor describes Cartier to TVLine as “an art dealer, among other things. He’s a very colorful character with a Don King element to him. He uses all of these big, elaborate words and quotes Shakespeare.”

Luckett, whose TV credits also include Treme and Single Ladies, will play Kenya, Jukebox’s mom and Marvin’s ex-girlfriend. Kenya left the family when Jukebox was very young and tried to make it in Hollywood as a singer, but now is settled in Harlem, where church is a big part of her life.

Brown has been cast as Renée Timmons, Marvin’s anger management therapist, while Singer will play Zisa, an up-and-coming vocalist looking to make a name for herself on Lou-Lou and Crown’s label.

No word yet on how Smith’s new opportunity will affect her role on Sistas. When the series broke for its Season 3 hiatus, her character Andi had left her lying ex-fiancé Gary and was attempting to start a new relationship with her coworker and fellow attorney Robin. Sistas Season 3B premieres next Wednesday, Oct. 13 at 9/8c.

Are you excited about seeing KJ Smith on Power Book III? Drop your thoughts in the comments.