Although Karin Konoval has co-starred in family fare such as Netflix’s The Baby-Sitter’s Club and a live-action take on Woody Woodpecker, she’s a more recognizable actress among adults than kids.

That could change when Konoval plays a dastardly and criminally inclined art collector named Ingrid Ravensworth in the new Disney Channel movie Under Wraps. A remake of the beloved 1997 mummy-buddy movie of the same name, it premieres Friday at 8/7c. (Check out the exclusive clip above.)

In the 1997 original, Lance Brady played the wicked art enthusiast who wants to own Harold, the lovable and reanimated mummy. Konoval says she’s more than ready to shake things up in this more inclusive reboot. After all, she simultaneously played sister and brother in the X-Files revival’s Season 11, after previously guest-starring in Seasons 3 and 4 of the beloved sci-fi drama.

“I’ve played male and female roles and really enjoyed doing that,” Konoval tells TVLine. “So, I guess I tend to think less about gender qualities in a character. Just about the unique energy and intent of each character I play that transcends gender. If that makes sense.” 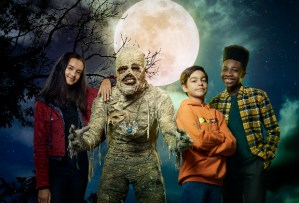 The character actor, who has also enjoyed meaty roles on Big Sky, Snowpiercer and The Good Doctor, says she was drawn to Under Wraps after having worked successfully with director Alex Zamm in the past.

“I wasn’t aware of the original film, to be honest,” Konoval confesses. “I auditioned for the role because I was asked to and having worked with Alex on Woody Woodpecker, I thoroughly enjoyed filming with him. He takes such delight in his work, and his enthusiasm is a joy to be around.”

When asked which project is creepier, Under Wraps or The X-Files, Konoval leaned toward the latter.

“I loved being a part of [The X-Files], having nothing to do with the ‘creep’ factor,” she says. “I’ve just been given some really interesting roles to play in the episodes I was part of. In “Plus One,” where I played brother and sister Chucky and Judy, each with split personalities, I was essentially four characters — a total joy to play. I don’t seek out any type of project in particular, but I’m very happy playing interesting roles and working with good people. That’s the only thing I seek out.” 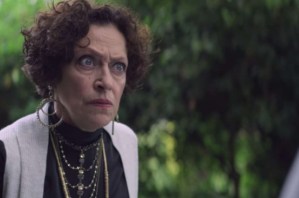 That list includes the role of Dawn’s witchy Aunt Esme in The Baby-Sitter’s Club. It’s a role Konoval cherishes, even though she wasn’t asked to return for Season 2.