Who would’ve ever guessed that having zero advantages could make you a target?

That’s exactly what happened in Wednesday’s episode of Survivor, when David Voce saw himself voted out by the Yase tribe over alliance member Xander, a player walking tall with an extra vote and a potential idol.

Despite the fact that the idol remains inactive (for now), Tiffany, Liana and Evvie still feared the wrath of its power, and made the questionable (and quite dumbfounding) decision against flushing Xander and his many toys, opting instead to shoot their shot at his right-hand man. (Click here for a full Episode 2 recap.)

Could Voce have played the extra vote himself, and why didn’t the guys convince Evvie otherwise? TVLine spoke with the latest ousted castaway to find out all of this and more.

TVLINE | What were your first thoughts when you learned Xander couldn’t vote?
DAVID VOCE | Having allies that can’t vote isn’t a problem. What’s frustrating is when madness ensues and people are paranoid, it becomes a game of Russian Roulette. I knew he couldn’t vote, but I also knew that he had an idol that wasn’t active. At the same time, it was good for me because from Day 4, we started suspecting that the girls were all in cahoots with each other, and you’ve got to get out the guy that has an idol, and who can’t vote. So, in my mind, I’m not the target. This is perfect for me.

TVLINE | Did you have any inkling that Tiffany was targeting you so hard?
No, it was a complete blindside at that point. Tiffany and I were super close. I do think that it was a little bit hurtful that I was coming after her, but the thing was, I was doing it very quietly. What was not shown, going into the challenge Xander and I thought that the target was Liana, but we suspected that maybe something had been going on, and that it could be Xander.

One of the things that really sealed my deal: Evvie was on her trek for so long, she got back and only had about five minutes before Tribal Council, so we physically could not talk to her. [Evvie has previously stated that their pronouns are they/she.] It was: Evvie got off the boat, we said hi, she told her story, then we were essentially going to Tribal. Evvie’s a very smart player, Liana’s a very smart player. If they were thinking about it, they could’ve done a 2-1 split vote to ensure Tiffany was safe and still flush an idol, and if it’s activated, then I go home. That I could understand. This doesn’t make sense for anyone! Other than the fact that, “We need to vote, there’s no time, let’s do… him!” which is essentially what it came down to, which is heartbreaking.

TVLINE | Did you ever think Evvie wasn’t on board with you guys?
On Day 4, Evvie was making Final 2 deals with everyone, and I was very wary of that. Xander and I talked about it. I was not too concerned because, again, it would have to be Xander that’s going home. When she was on the trek with Deshawn, she told everything about Xander, because Xander was the one who was supposed to go home! That was the plan. That’s where I was like, “Let things go!” Don’t be the dominant arrogant a–hole that everyone in the pre-season thought I was going to be. I was like, “Do not misplay this. Be available, be around, talk strategy with people.”

But you also have to remember that this is a five-person tribe, with one person on the trek, and then four people back at camp, with one person who can’t vote. So there was only me, Tiffany and Liana that had votes. Xander had an idol he couldn’t use, but he had an extra vote, and that extra vote couldn’t be used if you don’t have a primary vote, and if you don’t have a primary vote, you can’t use your Shot in the Dark. That’s a lot of information. We were all confused. We needed a rule book out there. Things were swirling. And Xander was not subtle with his advantages. We saw the written rules for everything that was going on. It was just a matter of fact that there was so much. It was just mayhem.

There had been talk of an intentional Matsing [like in Survivor: Philippines]. I get strategy. I get how Denise and Malcolm had that bond. But when you have four people on the tribe saying, “Maybe a Matsing is OK”… what are you talking about? [Laughs] That’s not a strategy! If you all think you can get to the Final 2, half of you are delusional! 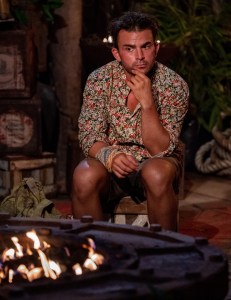 TVLINE | Would it have been possible for Xander to gift his extra vote to someone else? Was that ever discussed?
It’s very confusing and it’s very unclear. I don’t know. It was discussed very briefly, but at that point, there were so many advantages, twists and turns that our heads were spinning. We also did not know what Evvie was going to get on the island, if she was gonna come back with something. So that was also a fear.

TVLINE | Hindsight is, of course, 20/20, but what do you wish you had done differently?
I actually thought about throwing Xander under the bus, and the reason I didn’t is because you do have to establish loyalty with people. Even if Evvie was not completely on board with us and wanted to backstab Xander, if she saw me flipping on him, she could get freaked out and say I’m not loyal. So I thought, “Play it cool, play it lowkey right now.” If the girls wanted to team up against us, let them get Xander out. If they left him in and his idol is active, one of the girls goes home. That was exactly the mentality that Evvie had, and what she and Liana wanted to do, as we saw. It was just this meltdown that Tiffany had.

A lot of times I thought, “Should I not have said Tiffany’s name?” but when we were coming back from the challenge, I thought me not saying Tiffany was an emotional decision, because I love Tiffany. At the end of the day, this tribe was losing. We hadn’t won a single challenge, so I thought, “Set aside your emotions.” So either it was Tiffany that goes home because we used to start winning, or the girls pull a blindside and get out Xander.

That was a long-winded answer to say: Obviously I regret not doing something. That’s why at the end you heard me say, “Maybe my relationships weren’t great.” But honestly, I don’t believe that now after watching it. I just think that it was pure paranoia, with Evvie only having five minutes with people, where we didn’t have time to [plan] a split, which would have made sense. So, it all went down the drain. I said in the pre-season that Survivor is strategy plus luck. You have to have those married together.