OK so technically, technically, Law & Order‘s Stabler didn’t ghost his former partner again when he went undercover with the Albanian drug cartel. “He did let me know not to worry about him,” Liv says early in Thursday’s SVU, the first part of an SVU/Organized Crime crossover. (And to read a recap of the OC part of the event, go here.)

However, after Stabler’s previous disappearing act, you can understand why Benson is on edge. When Fin asks what Liv’s psychologist had to say about the situation, she smiles wryly. “He asked if it was triggering for me,” she says. “I lied and said it wasn’t.”

But little does Liv know, her next hangout with Elliot is going to happen much sooner than expected. Carisi prepares to go to the grand jury with a strong case against a serial rapist named Gabe Navarro who sexually assaulted a woman at the night club he owns. But Navarro is a bad dude who has ties to a much bigger fish, one that both the FBI and Organized Crime have been tracking for some time. So Liv and Carisi are called down to a secret meeting… and Stabler is there, along with Sgt. Bell. “Liv, you’re not going to like this,” he says.

He is correct! “You couldn’t tell me you were undercover?” Liv whisper-snipes at her old partner as everyone is briefed. But their back-and-forth is interrupted as Stabler is called upon to tell the group that he and Navarro crossed paths in Naples years before. Eventually, Benson and Stabler have a moment to catch up. He says Bell wouldn’t allow him to tell anyone about his new assignment. She mentions that she had surgery on her foot, and there are no leads on who hit her car. Then an FBI agent announces that Navarro wants to talk, but only to Stabler, and says it’s his call. “She’s the captain. It’s actually her call,” Stabler says, and it may be the single hottest thing he’s ever uttered.

Stabler's Letter to Benson: Here's What It Should Say 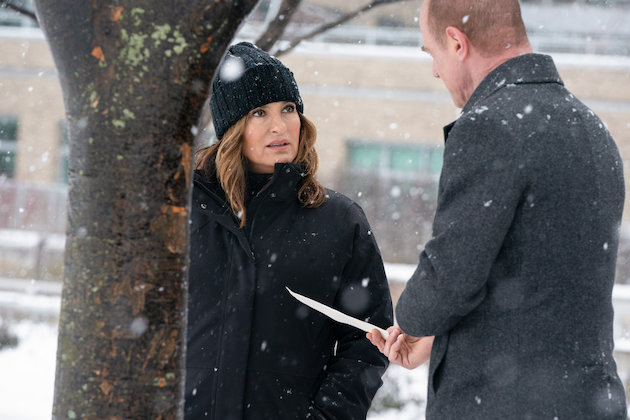 Anyway, Organized Crime, the FBI and SVU all begrudgingly work together to raid the big fish’s house, and they nab him. Stabler shoots Navarro in the shoulder in the process, but it’s all allegedly in the name of making it look like Navarro didn’t assist the cops. HOWEVER, when Carisi goes to the hospital to arraign Navarro… he’s gone, ferreted away by U.S. Marshals.

“Stabler lied to us,” the assistant district attorney says when he calls Olivia, irate. “We were played.” Later, Liv talks to Stabler on his burner before he goes back under, and he swears he had nothing to do with what happened with Navarro. “He told me to trust him, and I know him better than anyone,” Liv says to a livid Rollins. “You used to,” the detective replies.