Betty is still reeling from Polly’s death this week on Riverdale — and Alice is not taking it well. At all.

In Wednesday’s musical episode, Betty’s mom has retreated into a fantasy world in the wake of her daughter’s murder, listening to the Next to Normal cast recording on repeat and imagining she’s a perfect ’50s housewife in apron and pearls. In her fantasy, Polly is alive and well and living at home, along with Charles and Betty, but in reality, Alice is catatonic, and Betty doesn’t know how to help her. She invites Alice to go on a hike with her, but Alice would rather look at old photos of Polly. (In case you’re not familiar, Next to Normal is about a dysfunctional family where the mom pretends she has a perfect life… and the songs fit perfectly here, don’t they?) 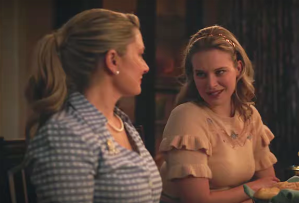 It’s Mother’s Day, and Alice wants to cook up a special dinner for her fantasy family, but Betty is still trying to shake some sense into her. She buys them tickets to go see a Broadway show together, but Alice won’t leave the house because she hears Polly’s voice asking her to stay. It gets ugly between her and Betty, with Alice accusing her of abandoning her family and blaming her for Polly’s death. (Ouch.) Betty turns to Kevin for comfort — which gives them a chance to sing a nice duet together, at least.

Betty goes back home and apologizes to Alice for leaving home, and Alice apologizes for trying to pin Polly’s death on her. Betty promises she’s staying in Riverdale with her for good — and their reconciliation lets the ghost of Polly walk out the door. They end the episode at a memorial for Polly, and mother and daughter sing together at Polly’s grave. Oof, that was a lot, emotionally… but at least it seems like Betty and Alice are in a better place now. And hey, how about Madchen Amick and Lili Reinhart’s performances this week, huh? 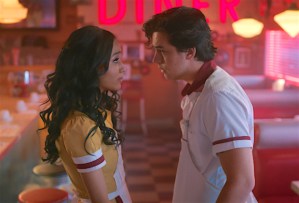 Elsewhere in “Next to Normal”: Jughead posed as Tabitha’s boyfriend at a dinner with her snobby parents, and it looks like they’re ready to be together for real; Archie and Veronica tried moving in together, but realized they want different things and are now “taking a beat” on their relationship (sorry, “Varchie” stans); Cheryl took in Toni’s pet project Britta after her parents kicked her out and quickly turned her into a mini-me; Toni and Fangs exchanged “I love you”s; and next week is the season finale already, somehow?!?