There’s a new mystery to solve in Riverdale this week… and Betty and Jughead are on the case.

Tabitha learns that her old friend Squeaky — who we last saw getting into a stranger’s truck to leave town — has gone missing. So she hires the best detectives she knows to help find her: Betty and Jughead. Yep, “Bughead” is back in action! Well, professionally, if not romantically. Jughead gets caught up on Betty’s investigation and thinks the brief disappearance of his former student Logan could be connected. Then the coroner calls with a fresh body, completely mutilated. Could it be Squeaky… or Polly?

Logan tells Betty and Jughead he was sleepwalking and woke up in a metal shed that looked like a spaceship, and a guy calling himself “the Moth Man” let him go and swore him to secrecy. Then the coroner confirms: The dead body is Squeaky’s… and the killer Betty got to swallow his tongue is a distant Cooper family relative! They interrogate Nana Rose, and she admits she handed off her cheating husband’s bastard kids to a family in the woods called the Starkweathers. (We can almost hear the Deliverance banjo now.) They find the shed, and Jughead pieces together that the old guy he chatted with in the woods is part of the family of killer truckers. The old guy confesses to all of it… just as Betty and Tabitha are attacked by armored Moth Men! They fight their way out, though, and the old guy tells Betty where Polly is: dead, in the trunk of an old car in the junkyard. Oof. 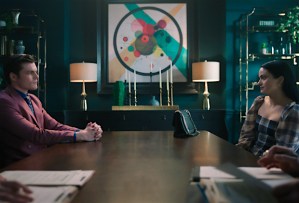 Meanwhile, Veronica is negotiating her divorce from Chad and agrees to give him everything he wants: “All I want, all I need is Archie.” Hiram warns Chad that he’ll never get Veronica back until he gets rid of Archie… and hands him an untraceable gun. That night, Chad rolls up on Archie and shoots at him, but he misses, and Archie hurls a trash can lid at him like it’s Captain America’s shield (whoa!) and chases him off. Veronica now wants everything in the divorce, or she’ll turn Chad in for attempted murder. Plus, she tells Archie she’s officially single now, and they get busy in a steamy sex scene.

Hiram isn’t ready to give up, though: He triggers an explosion at Cheryl’s palladium mine, and Archie the hero rushes back in to save Jackson before it collapses. They’re stuck inside, and Veronica knows Hiram is responsible: She knocks him out cold and ties him up, declaring that “if Archie dies, you die.” Low on oxygen, Archie gets a pep talk from his dead soldier Bingo — and an assist from a praying Cheryl — and walks out of the mine carrying Jackson. Chad goes after Veronica next, pulling a gun on her, but she gets the drop on him. They wrestle for the gun, and it goes off… and Chad lies dead. Veronica lets Hiram go with a warning, but we don’t think he’s giving up that easily.

Elsewhere in “Dance of Death”: Cheryl realized her ministry is made to worship Mother Earth and the natural elements — that’s what she harnessed to help Archie — but Kevin still decided to leave her church; Toni tried to help a gay student who ran away from home and joined forces with Betty and Jughead to free her from the Starkweathers; and we’re a little bit worried about how Alice is going to take this news about Polly.