Cheryl stepped up to take control of her family ministry this week on Riverdale. (Can we get an “amen?”)

She and Kevin are warming up to perform a medley from Joseph and the Amazing Technicolor Dreamcoat when Penelope interrupts with a message she claims is straight from Jason: No more singing. Cheryl bristles at this, and Kevin encourages her to assert her authority in the church: “It’s all about showmanship, Cheryl. You need to upstage your mother.” If she performs three miracles, he explains, she’ll be recognized as a saint. Easy enough for Cheryl Blossom, right?

Kevin suggests a few David Copperfield-esque magic tricks, and Cheryl turns water into maple syrup in front of an appreciative crowd. Next, she bleeds from stigmata in her hands, mimicking Jason’s “holy wounds.” For the third miracle, Cheryl brings out a swarm of bees and sticks her hands right into their hive, remaining unharmed. Penelope leaps up and calls her a fraud, but Cheryl fires back with a chilling threat, warning her mother that if she questions her again, “I will smite thee, for I am Cheryl Blossom, queen of the bees!” She later tells Kevin she didn’t even use any ointment to repel the bees: “Something inside me has shifted.” She thinks she might be a saint! Or is she a demon? Or a little bit of both? 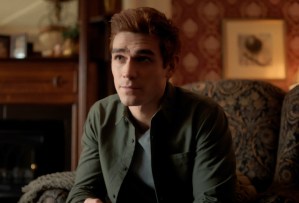 Meanwhile, Archie’s trauma gets stirred up when he learns the general that betrayed him is retiring with full military honors. He tells Uncle Frank the sad story: The general sent Archie and his troops on a suicide mission, despite Archie’s protests, and most of Archie’s platoon got killed as a result. He angrily confronts the general, but the general just laughs him off and dares him to testify against him. Archie asks the families of his dead soldiers for support and gets a mixed response, and Jackson is hesitant because he blames himself, but he comes around, and they get dressed up to testify at a military tribunal. The verdict: Jackson is cleared, and the general gets a dishonorable discharge. (But we never got to see the tribunal, for some reason?) 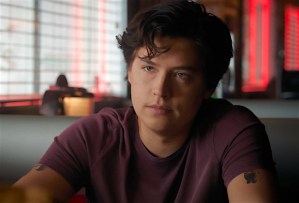 Elsewhere in “Band of Brothers”: Jughead scrambled to deliver fresh pages and resorted to stealing the book that groupie gave him to read before he returned to Riverdale, but he later confessed and lost his agent; Veronica stole Hiram’s stash of palladium and auctioned it off to pay her losses, and then she sabotaged Chad’s new business venture by planting a damning story in the press; Tabitha and Betty dressed up like hookers and hit the highway to lure in the truck stop killer; and Betty and Jughead had an emotional reunion in the bunker, where he apologized for that nasty voicemail and she confessed she’s too obsessed with finding serial killers. Could a “Bughead” rekindling be in the cards?