Josie McCoy made her return to Riverdale this week — and she actually had more than a couple lines for once.

Actually, Wednesday’s episode plays like an apology for the way Josie was sidelined for the first three seasons, giving her a musical showcase that was long overdue. (Hey, better late than never, right?) We can tell things are different right from the start: Melody is narrating instead of Jughead! Yes, Josie’s former Pussycat bandmates Melody and Valerie are back, too, for the first time since Season 2. Her narration catches us up: Melody left law school to write a novel that is now being optioned by Tyler Perry (!), and Val is an aspiring artist with a boyfriend named Alan who wants to marry her, so it’s nice to see they’re doing OK after all these years. 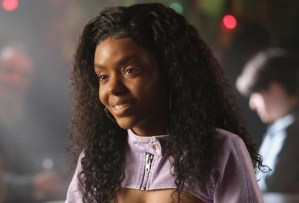 Josie casually drops into Pop’s, but Tabitha freaks out: Josie is now a multi-platinum mega star, taking a detour on her massive world tour. She tells Tabitha she just came back for some “me time,” and she sings the Celine Dion power ballad “It’s All Coming Back to Me Now” as we see flashbacks to her time in Riverdale. She’s joined mid-song by Melody and Valerie — a Pussycats reunion! Josie asks Principal Weatherbee if she can use the school’s music room to record new music, and he agrees… if she’ll teach a music class for the students while she’s here. She says she will, and when Archie hears her voice in the halls, he stops in for a hug and invites her to the Whyte Wyrm to hang out with the old gang.

Josie doesn’t have a lot of great memories to share, though. At the Whyte Wyrm, she reminds Archie and the gang how much they pushed her to the side back in the day: “I didn’t have much of a say in our old times.” (How meta!) They want her to stage a concert to benefit Riverdale, but she’s not eager to save a town that treated her so badly. She also has a rocky reunion with Melody and Valerie, who are still hurt about the way she ditched them years ago. They can still sing, though, and they prove it, with Melody covering Dua Lipa’s “Physical.” Plus, Josie has a steamy reunion with her ex Sweet Pea, taking him back to her hotel room for a quick fling. 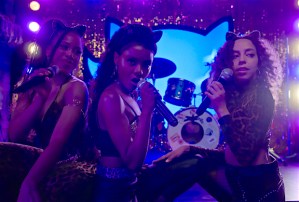 Why is Josie back in Riverdale, though? We find out when she sobs in her mother Sierra’s arms: Josie’s dad died while she was on tour, and she stepped away to come back home and grieve him. Sierra gives her Dad’s ashes to sprinkle around the country, along with some songs he never got to record. Melody and Valerie offer their condolences, and the reunited Pussycats decide to play a one-night-only reunion concert at the Whyte Wyrm to help save Riverdale. (Even the local coroner shows up. He’s a big fan!) They bring down the house with a medley of hits, including a soulful rendition of Nina Simone’s “Stars” as a tribute to Josie’s dad. It goes so well that Josie invites the Pussycats to join her on tour as she spreads her father’s ashes.

Sweet Pea asks to tag along, too — “I could be your roadie. I could be your anything” — and Josie says yes. But before their tour bus leaves, they’re stopped by a musician named Too Sweet, who toured with Josie’s father. He tells her that her dad was mixed up in bad stuff in New Orleans, and may have even been murdered down there. Josie decides to head there first, then. Hmmm, do I smell a spinoff?

Elsewhere in “The Return of the Pussycats”: Speaking of Katy Keene, Alexandra Cabot showed up demanding the money she invested with Chad back from Veronica, and Ronnie pitched her on franchising Pop’s nationwide with Tabitha. Alexandra was interested, but she wanted to turn it into a singing diner — leading to a spirited “Little Shop of Horrors” cover — and to tweak the milkshake formula to save money. Tabitha refused to budge on the milkshakes, and her strong conviction helped convince Alexandra to invest anyway, with the milkshakes intact. Plus, Toni had her baby! It’s a boy, and she named him Tony, or Anthony, after her grandfather. Great… but we still don’t know who the father is!

Got thoughts on Josie’s big Riverdale return? Grab a booth in the comments below.