Riverdale leaned into the creep factor this week with a trio of unsettling vignettes that followed Archie, Betty and Jughead down some very dark roads.

Cheryl gets a visit from Minerva on a dark and stormy night, showing her a selection of her latest paintings that set up the episode’s three stories. First, Archie is seeing a new therapist named Dr. Winters about those PTSD nightmares he’s been having. He turns down her recommendation of psychiatric meds, but he seems to like her. Plus, he and his Army buddies have a new job: Cheryl recruits them to dig for palladium underneath her maple groves. Once he’s in the mines, though, he has a nasty vision of dead soldiers and goes back to the doc to take her up on the medication, so she hands him some generic Xanax.

Back in the mines, Archie is still having visions, this time of creepy aliens, and he goes into a paranoid frenzy, barging into the therapist’s office and accusing her of drugging him with psychedelics. Soon enough, though, all the miners are freaking out, and they realize it’s carbon monoxide from the mines that’s messing with their heads. (Cheryl still wants them to keep digging, though.) Archie apologizes to his doctor and says he wants to continue seeing her, but now she’s afraid to be alone with him… and he’s still having those visions of dead soldiers. 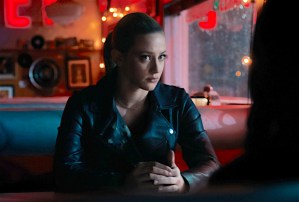 Next, we catch up with Betty, who’s holding that trucker guy from last week captive in the high school’s auto body shop. When he demands a phone call as an American citizen, she replies: “You’re not in the United States anymore. You’re in Riverdale.” (Fair enough!) She tells him he doesn’t have any rights, and the whole ordeal is giving her flashbacks to her close call with the Trash Bag Killer. The trucker fiendishly toys with Betty, sending her on a wild goose chase to dig up dog bones and admitting he sees all women as “prey.” When Betty brings in Alice to humanize Polly, the guy just taunts her, telling her that Polly “squealed like a pig when I slit her throat.” At this point, Alice just wants the guy dead — and Betty is ready to oblige.

She grabs a chainsaw and warns the trucker she’ll torture him by carving off his limbs but keep him alive… which is exactly what the Trash Bag Killer threatened to do to Betty, we learn. But before she can start, the guy swallows his own tongue and chokes on it, killing himself. So he’s no longer a danger, but we still don’t know what really happened to Polly — and Betty doesn’t think he was acting alone, either. 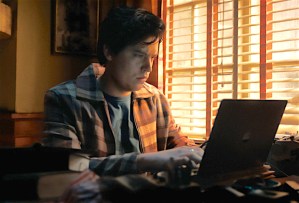 Last up in Cheryl’s Creepy Storytelling Hour is Jughead, who shares his life story at a meeting for alcoholics: After high school, he went to Iowa’s writing workshop, but quickly got bored there and started drinking heavily. (Even when he signed with a literary agent, the guy gave him a bottle of booze.) He moved to New York to write full-time, and turned to psychedelic maple mushrooms for inspiration after suffering from writer’s block, blasting through page after page to write his first novel. All the while, he tried to keep in touch with Betty, but when she didn’t come to his book release party, he got wasted and left her that venomous voicemail, calling her a “cold, fake, duplicitous bitch.” Ouch.

Jughead woke up in a hospital bed after being unconscious for days. He finds out later he’d been treated for a rabies infection: That drunken night, he fell into a sinkhole and wandered through the subterranean tunnels of New York City, where he encountered a crazy guy calling himself the “Rat King” and waving a knife at him. Jughead kept the guy at bay by reading aloud from his book, but that night, he had a vision of Betty telling him he’ll drown if he stays underground. He eventually emerged… and discovered the whole “Rat King” thing was actually a rabies-induced hallucination he had after he was swarmed by rats. (Ew.) He credits Betty with saving his life, and now he knows he needs to get his drinking under control.

Minerva likes Cheryl’s paintings… and likes Cheryl, too. Cheryl unveils one last portrait of the two of them as Cupid and Psyche, and Minerva decides to forgive her, spending the night with her at Thorn Hill. After those scary stories, though, we’d be getting the heck out of there.