Betty and Tabitha set a trap for the truck stop killer this week on Riverdale — and yes, it involved singing and gyrating suggestively on stage.

Still on the trail of her missing sister Polly, Betty is driving a big rig and tracking a suspect when she pulls over and acts as bait, propositioning the guy… but she just gets busted by Glen and the FBI for solicitation. She turns to Tabitha, who has a bright idea: Why don’t they put on a bit of alluring entertainment at Pop’s to lure in the trucker? Betty comes up with a Coyote Ugly-esque girlie show called “Wild Foxes,” so they can run all the truckers’ license plates while they’re distracted.

Betty, Tabitha, Cheryl and Veronica take the stage in tiny, shiny tank tops and sing Poison’s “Nothin’ But a Good Time” to a rowdy crowd, and they quickly zero in on a suspect. The blood in his truck’s trailer, though, is from a big meat shipment, so he’s clean. But in the parking lot, Betty gets picked up by another trucker who missed the show — and she sees blood on his truck’s door. She texts Tabitha to track her and gets in the guy’s cab. He makes small talk about how much he enjoys watching people die before pulling over and unsheathing a knife… but Betty is ready for him and knocks him out cold. He gets away from her and grabs a chainsaw (!), slicing through the roof of the cab to get at her, but she grabs a wrench and clocks him in the skull. Nice shot!

Tabitha arrives on the scene to help, but Betty doesn’t want to just hand this guy over to the authorities. She wants to get Polly’s location out of him first. Uh-oh… you picked up the wrong girl, Trucker Guy. 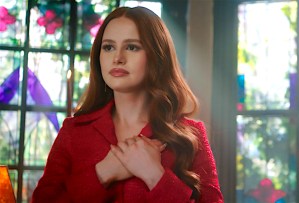 Cheryl, meanwhile, is taking a stroll through the woods in an elaborate Little Red Riding Hood costume when she spots Kevin, who slinks away in shame. Back at school, she confronts him about cruising again and offers him salvation through the Blossom family ministry, but Kevin bails on the service early. Cheryl knows he still has unresolved feelings for Fangs and pushes him to apologize, so Kevin goes over to Fangs and finds him… with our old pal Moose Mason! Who now has long hair and a beard! (Long time, no see, buddy!) That sight sends Kevin into a crisis, wondering what he’s still doing teaching in Riverdale when he always wanted to go to the city and pursue his artistic dreams. So Cheryl gives him an outlet at her ministry, making him artistic director and joining him in a duet from Jesus Christ Superstar. It’s not Broadway, but hey, it’s something. 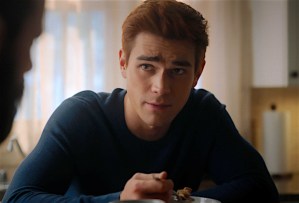 Elsewhere in “Reservoir Dogs”: Archie and his old Army pal Jackson were having traumatic war flashbacks, so Uncle Frank tried to soothe their jangled nerves with a sweet shelter dog, but it turned out the pooch was once (woof) part of an illegal dogfighting ring, so an enraged Archie savagely beat up the ringleader; that story got a happy ending, though, when Uncle Frank set up a dog shelter at Archie’s boxing gym; Veronica got back into investment banking, and Reggie gave her the names of Hiram’s land investors as fresh leads so she could swipe her dad’s empire right out from under him; and for the second week in a row: Where the heck is Jughead?!?