Every gangster has an origin story, and this week, Riverdale‘s gave us Hiram Lodge’s. (It’s kind of like that upcoming Sopranos prequel movie, only with more milkshakes.)

Hiram is busy running Riverdale when he gets a call telling him a certain someone has finally been located. He says he’ll take care of it personally. (Hmmm.) Reggie hands him a briefcase full of cash to pay off his dad’s debt, but he wants to keep working for Hiram and moving up the criminal ladder. Hiram tasks him, then, with finding him a gun that can’t be traced. Reggie’s dad isn’t happy about his son’s new business venture: He comes to Hiram begging him to leave Reggie alone, but Hiram says he should be proud of him. Reggie lashes out at his dad for interfering and gets the untraceable gun for Hiram, opening up about his rift with his dad. It reminds Hiram of his own dad: “Therein lies a tale.” 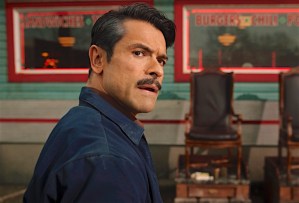 We flash back to New York City, 1988: Hiram is still “Jaime” (Mark Consuelos’ son Michael is back as a young Hiram) and his dad Javier — played by a mustached Mark Consuelos — shines shoes on the sidewalk. A customer pays him with a chunk of palladium and tells him there’s more of the valuable mineral in Riverdale, so Javier moves his family there. He can’t find any palladium, though, so he shines shoes outside of Pop’s while Jaime’s mom waits tables inside. Jaime catches the eye of a local gangster named Vito, who offers the kid a job. His dad doesn’t like it, but Hermione won’t date Jaime because he’s broke, so he goes to work for Vito and struts into school in a new leather jacket and gets her to say yes to a date at Pop’s.

The date goes well — they bond over their tough upbringings, and he tells her about his dream of living in a New York City penthouse — until the cops barge in and bust Jaime for drug trafficking. He keeps his mouth shut, though, and Vito bails him out and promotes him for not snitching. (He also advises Jaime to marry Hermione, since she went to Vito for help.) In his sweet new convertible, Jaime tells Hermione he wants to change his name to “Hiram Lot.” She wisely tweaks it to “Hiram Lodge,” and a gangster is born.

His father is understandably upset, and he goes to Vito to tell him to leave Hiram alone. (Parallels!) Javier even threatens to rat Vito out to the cops, which isn’t too smart… because it leads to Vito’s goons gunning Javier down in front of Pop’s, with the poor guy spilling oranges just like The Godfather‘s Don Corleone. Vito comes to Javier’s funeral and offers to help in any way he can — but Hiram just wants revenge. He guns down Vito’s henchmen and takes over the local criminal underworld, marrying Hermione and moving to New York City with a newborn Veronica. He came back to Riverdale, he tells Reggie, to find the palladium that eluded his father all his life — and now he knows there’s more underneath the Blossom maple groves: “I will finish what my father began.” 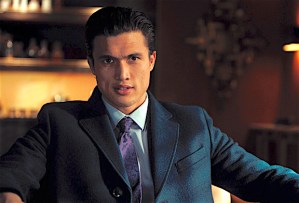 Reggie is impressed and wants to follow in Hiram’s footsteps. But being a gangster isn’t all it’s cracked up to be. Hiram urges him to go back and mend fences with his father while he still can, and Reggie shares a tearful reunion with his dad. Meanwhile, Hiram takes his untraceable gun to a nursing home where he finds… an ailing Vito on his deathbed. He gives his former mentor a chilling speech and shoots him dead for killing his father. Back at home, he watches Hermione and Veronica on reality TV talking about how Hiram will never be happy. He vows, then and there, to win them back.