The good news: Riverdale‘s Jughead isn’t in an alien spaceship headed to another planet. The bad news: He is in a truck headed for God knows where.

Wednesday’s Season 5B premiere ended with a reeling Jughead deciding to go back to New York City to confront his demons after a sobering stay in a homeless encampment. He got into a strange truck driver’s cab… which, as we know, has spelled doom for several Riverdale residents so far. Plus, Archie and Veronica agreed not to rekindle things while she’s still married to Chad, Betty and Tabitha bonded by tripping out together after Jughead’s ex Jessica dosed them with psychedelic maple mushrooms, and Cheryl found religion and had a vision of her dead brother Jason after her mom Penelope started a new (and possibly scammy) church at Thorn Hill.

After all that chaos, TVLine turned to Riverdale showrunner Roberto Aguirre-Sacasa for answers. Read on to get the latest on Archie and Veronica’s relationship, a possible reunion for Betty and Jughead… and Cheryl’s fragile mental state. 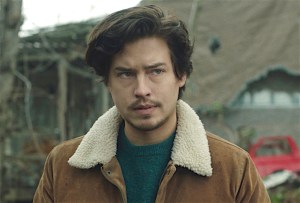 TVLINE | We saw Jughead hitchhiking and getting into that truck at the end of the episode, which we know is bad news. So does this mean we’ll see his mission and Betty’s mission start to overlap?
We one hundred percent will. Jughead’s big mystery is sort of unpacking what happened to him in those seven years in New York, what led to him leaving that crazy message. But he does get involved in Betty’s mystery and Polly’s mystery. By the end of the season, I would say that he and Betty are working together to try to bring Polly home.

TVLINE | It looks like Archie and Veronica are inching closer to a reconciliation. Are they, and is Chad out of the picture at this point?
Chad is still very much in the picture. We’ve got a lot more to do with Chad, unfortunately. [Laughs] I will say that in [the premiere], that conversation where Archie and Veronica decide to not get back together and to not immediately dive into a relationship until they have their house in order is a very fateful decision that will resonate in a huge way throughout the rest of the season. I love that scene, though, toward the end of [the premiere], with Archie and Veronica in the diner, because they so clearly love each other and they so clearly want to be with each other, and KJ [Apa] and Cami [Mendes] have such amazing chemistry. It sort of makes you ache for that reunion and pray for it. 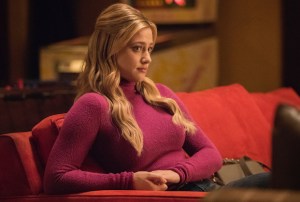 TVLINE | Speaking of reunions, I have to ask if there’s any chance that we’ll see Betty and Jughead patch things up.
I think that Betty and Jughead have a lot more of a distance, a gap to bridge than Archie and Veronica. All I’ll say is I think they have to first rebuild their friendship, and they have to kind of unpack that voicemail, which is so dark, and Cole [Sprouse] committed to so wholeheartedly. I think they’ve got a bit of a journey and their own stuff to sort out. I will say that, I think it’s in Episode 16, Cole and Lili [Reinhart] have this beautiful scene that’s almost like a one-act play, and it’s just the two of them talking about what their lives have been like without each other, and it’s so beautiful. It starts to open the door between those two.

TVLINE | So Cheryl is seeing visions of Jason again, and her mom is starting this church. Is she headed down another strange Blossom family road here?
I will say that this turns into a big story for Cheryl, and yes, it does seem to start as a loony Blossom plot or grift. But for Cheryl, it does become real, and she is fulfilled in a way that she hasn’t felt since Jason. And I will say that we keep pushing beyond even that threshold, and it leads to a very surprising place for Cheryl by the end of the season. It sort of redefines who that character is in an exciting way.

Give tonight’s Riverdale premiere a grade in our poll, and then grab a booth in the comments to share your thoughts.