Warning: This post contains spoilers from Tuesday’s Our Kind of People. Proceed at your own risk.

A lot of action took place on Tuesday’s second installment of Fox’s soapy new offering Our Kind of People.

This includes the confirmation that Teddy (Scandal‘s Joe Morton) is in fact Angela’s biological father. Angela nearly confronted the rich and powerful businessman, but he slipped away before she could. Fans needn’t worry: Chicago Med vet Yaya DaCosta, who stars as Angela, says her character will get to meet her long-lost dad in next week’s Episode 3 — and that’s all she could say.

Until then, the actress adds that she’s proud to be a part of Karin Gist and Lee Daniels’ sexy and glamorous drama, which explores the Black, rich and ruthless who call Martha’s Vineyard home.

“I took this role because I saw an opportunity to have fun and tell stories that are new in some ways,” DaCosta excitedly tells TVLine. “To be in collaboration with a place where women are the majority and people of color are the majority, to tell a story we don’t often see, excited me.”

DaCosta, like her character, is obsessed with hair. “To be in a job where I can address that part of me, because Black hair is a big part of my life, is thrilling,” DaCosta adds. “Natural hair is not only embraced on Our Kind of People, but it’s celebrated.”

The series also celebrates the relationship that Black women have with one another, and that energizes DaCosta as well. Although Angela is often at odds with her much more affluent half-sister Leah (Nadine Ellis), their dynamic could change, she says.

“I love working with Nadine,” DaCosta gushes. “She has the best facial expressions, and she really grounds her performance in a way that challenges me to do the same. Yes, they’re catty, but there is a playfulness to it, so that if there is ever a turn in their relationship, it will be more believable.” 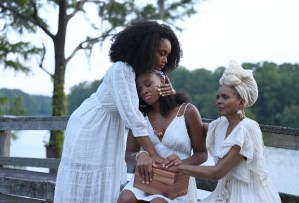 Angela lives in a three-generation household with her Aunt Piggy, played by the incomparable Debbi Morgan, and her daughter Nikki (newcomer Alana Bright). DaCosta says working with Morgan has given the two a reunion of sorts because Morgan played her character Cassandra’s mother Angie on All My Children 13 years ago.

“I have so much fun working with Debbi,” DaCosta reveals. “I am just tickled by how lucky I am to be able to learn about her as an artist through this job. When I worked with her in 2008 on All My Children, there wasn’t time to get to know her like I do now, and we were different people. In that way, it’s also a beautiful reminder that being human consists of multiple lifetimes. And as time goes on, you get the opportunity to become flexible and evolve and change and grow.”

Time constraints and evolution also inspired the producers to axe a scene from the pilot in which Angela slaps her daughter Nikki. The scene was also a part of the official trailer, but that, too, has been deleted.

“One of the things about pilots is sometimes there’s a lot of information that gets packed in in order to let people know who the characters are,” DaCosta says. “There were so many moments cut from that first episode, including the scene where Angela slaps Nikki. I’m glad it was removed, personally. People can relate to having a teenager and wanting to slap them, but these women love each other, and you can’t parent the way our parents did. CPS will be called, but our children are also old souls who are here to teach us something new.” 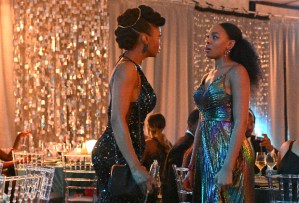 In that way, DaCosta adds, getting rid of that scene shows a more nurturing way to parent. It also allows the show to slowly reveal the dynamics between the two and establish how Angela’s late mother Eve raised Nikki and spent more time with her than Angela did. Because of this, Nikki doesn’t fear Angela the way Angela feared her mother. She also says viewers will eventually meet Nikki’s father.

“Physical abuse is not who we are, but what we learned,” DaCosta concludes. “We are the descendants of enslaved Africans who were constantly beaten as a punishment, and that’s why our ancestors took out their inflicted pain on their kids. But we don’t have to do that anymore.”