Power Book III fans who caught the Starz drama’s Season 1 finale now know Kanan can’t trust anyone — not even his own mother Raq.

It’s a level of distrust and forced independence that clears the way for the titular character to strike out on his own sooner than expected after nearly killing Det. Howard. While it’s unlikely that Kanan’s protégés Ghost and Tommy would make an appearance in Season 2 because they’re so young (unless there is a major time jump), future seasons could easily introduce the two into Kanan’s world. It’s a move that could happen as early as the third season, says executive producer Curtis “50 Cent” Jackson, who costarred as Kanan in the original Power.

“Power Book III could become as successful as Power itself,” Jackson ambitiously tells TVLine. “It’s up to the writers and the showrunner, but viewers should expect to meet Breeze by Season 2. He was Kanan’s partner and boss and more aggressive than anyone could hang with or handle. Breeze became Ghost and Tommy’s boss, and Ghost ended up killing Breeze before viewers got to meet him.” 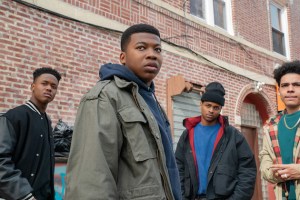 Prior to the time James St. Patrick turned into Ghost, a nickname Breeze gave him, Kanan and Breeze turned James and Tommy into cold-hearted killers. And that’s how Ghost was able to take out Breeze and eventually double-cross Kanan.

Showing that transition would be entertaining to explore, Jackson says, despite Power creator Courtney Kemp’s staunch declaration that Ghost and Tommy don’t belong in the sequel series, which is set in New York’s Jamaica, Queens in the early 1990s. Introducing Breeze would also show that Raq and her brothers weren’t the only ones who raised Kanan.

“It would be fun to explore how James became Ghost and where he and Tommy started,” Jackson concludes. “Fans who love Power should get to know Breeze first and find out how he and Kanan became acquainted and also what ends up happening to Raq and their whole family by the time Kanan becomes a boss.”