Franchise fans who were hoping to get to know young versions of Ghost and Tommy in the Power prequel Book III: Raising Kanan will have to keep dreaming. This story takes place after the characters’ bedtimes.

Instead, when the canon’s third offering premieres this Sunday at 8/7c on Starz, a 15-year-old Kanan (played by Kirby Buckets‘ Mekai Curtis) will introduce viewers to a gritty world filled with stick-up kids, corner boys and queen- and kingpins in 1991’s Jamaica, Queens. Kanan’s mom Raq (Madam Secretary‘s Patina Miller) is a drug lord, and although she and her brothers are street-life icons, she wants better for her book-smart son.

“Power fans have been been clamoring for a prequel for a really long time,” executive producer Courtney Kemp, who created the original series, passionately tells TVLine. “A lot of people thought they wanted to see Ghost and Tommy as kids. But that’s not an interesting story to me. With Ghost and Tommy, you know that they’re going to live.

“We really get into what 50 Cent calls the golden era of drug dealing in South Jamaica Queens,” Kemp expounds. “You get to visit that time period, and I thought this was a much more interesting way of doing it.” 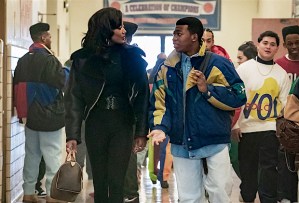 Kemp also points out that the Kanan character is five years older than his eventual proteges/betrayers, and Power Book III takes place when the duo was still in elementary school. While urban dramas such as The Wire do explore kiddie crooks, this isn’t that show, she adds adamantly.

“I just hate being asked about Ghost and Tommy in the prequel,” Kemp says. “Ghost and Tommy are 10 years old at the start of this series. There is no conversation we need to have about them right now, because they are children in the fifth grade. And I know the whole Power universe is going to be like, ‘Where is Ghost and Tommy?’

“But this is not a Ghost and Tommy origin story. That’s boring. Who cares?” she asks. “If you think about it, it’s not exciting. I rolled my eyes because it’s not a new story to tell. I will keep telling people they are 10 years old and their long division is shaky. They’ve got Trapper Keepers and protractors. They’re not in the game yet. They’re literally still playing games.”