The proceedings inside the Dancing With the Stars ballroom took a dramatic turn on Monday night — and it had nothing to do with Season 30’s first elimination.

OK, it had a little to do with that elimination; it’s never fun to be the first couple tangoing out of the competition. But the biggest twist of Week 2 transpired when — as reported earlier Monday — pro dancer Cheryl Burke contracted a breakthrough case of COVID-19, turning her and Cody Rigsby’s future in the competition into a big ol’ question mark.

While Cheryl quarantines at home for the next 10 days, she and Cody were judged this week on their taped rehearsal in the studio, which was critiqued and scored like any other Monday dance. How was the performance itself? Read on for some rapid-fire thoughts on this week’s routines:

Matt James and pro Lindsay Arnold (Samba): Truthfully, Matt’s performance in this samba was more in line with how I thought he might do in these early weeks of competition, whereas last week’s cha-cha was a very pleasant surprise. I appreciate Matt’s energy out on the dance floor, and judging by that striptease section, he’s game for anything and unafraid to look a little goofy… but the fluidity just wasn’t there, and those samba rolls near the end were awkward and graceless. Judges’ Score: 22/40 (Weeks 1 and 2 combined: 46/80) 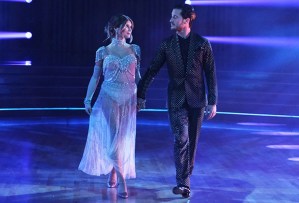 Olivia Jade and pro Val Chmerkovskiy (Viennese Waltz, pictured): I get the sense a lot of viewers — well, a number of TVLine readers, at least — are rooting against Olivia, thanks to the events of the past few years. But let’s isolate the dancing and give credit where it’s due: Olivia is a really, really lovely performer. It can be intimidating, and perhaps a little awkward, for young female performers to develop a sensual chemistry with male partners who are older than them, but Olivia and Val had a beautiful openness with each other here. Judges’ Score: 27/40 (Weeks 1 and 2 combined: 52/80)

Kenya Moore and pro Brandon Armstrong (Cha-Cha): Despite doing her best Sally O’Malley impression while receiving the judges’ critiques, Kenya seemed strangely timid during what should have been the boldest and most fearless parts of this dance. She recovered nicely from some botched steps at the beginning of the routine, but perhaps not enough to stand out as a real contender this week. Judges’ Score: 24/40 (Weeks 1 and 2 combined: 50/80)

The Miz and pro Witney Carson (Tango): Given the Bobby Bones-type energy rolling off The Miz, I was pleased to see how much he restrained his movements when the tango called for it. Now, let’s hope Witney helps him break the habit of scrunching up his jaw and mouth all tense. Judges’ Score: 26/40 (Weeks 1 and 2 combined: 50/80)

Brian Austin Green and pro Sharna Burgess (Rumba): Brian and Sharna’s chemistry is clearly off the charts, and the way they embraced at the end of this number, while singing along to their song, was tremendously romantic. But I’m starting to worry that their real-life relationship is detrimental to Sharna’s choreographing prowess: There was strangely little rumba content for Brian here, and I’d hoped Sharna might challenge him a bit more than we’ve seen so far. Judges’ Score: 23/40 (Weeks 1 and 2 combined: 47/80)

Christine Chiu and pro Pasha Pashkov (Salsa): Christine is truly radiant on the dance floor, and her longtime love of DWTS is absolutely precious. This salsa, though, had a number of awkward moments, like Christine’s leg strangely coming off the ground when Pasha dipped her head at the start of the number, or her slide between his legs at the very end that turned out a little bumpy. Still, she’s such a fan of the show, and clearly so committed to learning, that I hope she’s given the opportunity to keep improving. Judges’ Score: 24/40 (Weeks 1 and 2 combined: 49/80) 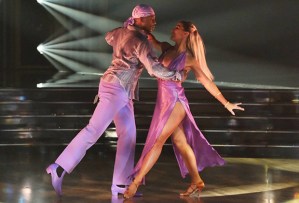 Jimmie Allen and pro Emma Slater (Rumba, pictured): The elegance! The passion! The hips! Yes, Jimmie’s rumba was particularly impressive after Brian Austin Green’s attempt at it, but I suspect we should keep our eye on the country singer, who proved with this number that he isn’t afraid to be vulnerable and sensual when the dance demands it. Judges’ Score: 27/40 (Weeks 1 and 2 combined: 49/80)

Amanda Kloots and pro Alan Bersten (Foxtrot): I know there’s plenty of Dancing viewers in the “Why are ringers allowed on this show?” camp… but I’m not one of ’em. Amanda brings a refreshing effortlessness to her movements, and her previous stage experience allows her to be animated and theatrical in a way most other competitors aren’t comfortable with just yet. Judges’ Score: 32/40 (Weeks 1 and 2 combined: 60/80)

JoJo Siwa and pro Jenna Johnson (Cha-Cha): Good on the judges for calling out JoJo’s contagious-but-sometimes-a-little-much energy, which was especially evident in those side-by-side sections during the last third of the performance. That said, JoJo and Jenna deserve more credit for how seamlessly they’re adjusting traditional male/female choreography to be performed by two women; the movements might look easy, but there’s some serious physical strength underneath them. Judges’ Score: 31/40 (Weeks 1 and 2 combined: 60/80)

Iman Shumpert and pro Daniella Karagach (Rumba): Iman wasn’t quite as thrilling and surprising here as he was during last week’s premiere, and parts of this rumba got a little heavy. But once again, the NBA player’s commitment to the choreography, and his ability to fall into the pocket, is so entertaining to watch — and excuse me, but that deep lunge? When Iman is 6’5″? Incredible. Judges’ Score: 25/40 (Weeks 1 and 2 combined: 46/80) 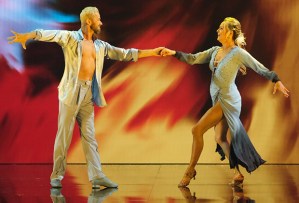 Melora Hardin and pro Artem Chigvintsev (Rumba, pictured): Wasn’t it a bit strange that Melora and Artem never came down the stairs during their routine? It continuously felt like the performance was just getting started, and I’d hoped for the choreography to have a more pronounced climax for such a drama-infused number. (A waste of that big note in “All By Myself,” if you ask me!) (I realize none of you were asking me.) Judges’ Score: 27/40 (Weeks 1 and 2 combined: 53/40)

Cody Rigsby and pro Cheryl Burke (Salsa): It’s tough to accurately judge this taped rehearsal, a setting where Cody is allowed to pull funny faces and grimace at Cheryl a bit when he makes a mistake. On the whole, though, this salsa was quick and light… though Cody does need to work on his synchronization quite a bit. Judges’ Score: 24/40 (Weeks 1 and 2 combined: 48/80)

Mel C and pro Gleb Savchenko (Foxtrot): I sincerely hope Gleb knows what a gem he has in Mel, and challenges her accordingly with his choreography. This foxtrot was so charming and refined, with an ease and certainty in Mel’s movements that only Amanda Kloots matched with her routine. Judges’ Score: 30/40 (Weeks 1 and 2 combined: 57/80)

Suni Lee and pro Sasha Farber (Cha-Cha): After watching Suni’s rehearsal package, in which she finally allowed some emotional walls to come down, I’m not surprised the judges focused more on her feisty attitude than her actual execution of the choreography. But while this cha-cha was absolutely packed with legitimate — and fast — content that Suni grasped well, she wasn’t as crisp as I would have anticipated, specifically in her arms, which are getting a little loosey-goosey. Judges’ Score: 28/40 (Weeks 1 and 2 combined: 56/80)

And now, the first elimination results!

OK, your turn. Do you agree with Martin and Britt’s elimination? And what did you think of the Week 2 performances? Tell us below!