All I know for certain, after watching this week’s Evil, is that David Acosta is on track to become a priest in 18 days. Everything else is a devilishly delicious question mark.

Is Kristen evil-free after her accidental exorcism? Was she ever demonically influenced to begin with? Speaking of which, what was going on with Leland before Sheryl dumped all that blood on him? And, on a related note, what in the frilly heck is up with those infusions Sheryl is getting?

I’ve got no clue, and I do not care: This show is so fun and so well-done, I’m down to supernaturally clown. Read on for the highlights of “I Is for IRS.”

SWAPPING YOUR BLOOD WITH FORMALDEHYDE | The hour opens with a hilariously on-the-nose montage of Sheryl and Leland doing weird blood stuff, all set to Andrew Bird’s “Fake Palindromes.” It appears that Kristen’s mom is now a willing recipient of those behind-the-knee transfusions; Leland seems to be her partner in a scheme that lures dudes (and maybe women?) home with her, then drills into their heads and maybe drains their blood? 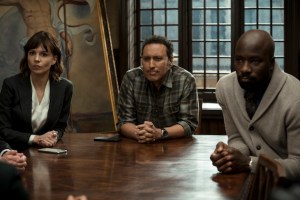 But then we’re at the rectory with Kristen, David and Ben, who are meeting with a representative from the Internal Revenue Service at the behest of Bishop Marx. The basics: Whenever a group is trying to claim it is a religion in order to receive tax-exempt status, the IRS asks representatives of other, adjacent religions to check it out and report back. So our favorite trio is tasked with investigating the New Ministry of Satan. In order to be deemed tax-exempt, a religion must meet four criteria: It has to focus on worship, it must not be about making money, it must be legal and it must not be political. It also has to have a combination of credence, history, literature and a place of worship.

Marx privately lets David, Ben and Kristen know that “it would be helpful” if they can guide the IRS away from rewarding the New Ministry of Satan the same status that the Catholic Church has. So they go to the New Ministry’s storefront place of worship, where a cocksure guy named Graham Lucian welcomes them. He shows them around, confidently pointing out how the ministry meets all of the IRS’ criteria. But the congregation has only 12 people, and the staff seems more invested in selling novelty T-shirts online than in adding new converts to the unholy flock.   “This is a scam, isn’t it?” Kristen asks. “No more a scam than your church,” Graham shoots back. And when she says that she’s not a believer, he seems intrigued.

‘ARE YOU SLEEPING WITH SOMEONE?’ | Later, a therapy session with Kurt (wait, I thought he was only going to consult that one time?) is going nowhere, so Andy decides to get to the point: “Are you sleeping with someone?” he asks his wife, mentioning Ben and David as two possibilities. She tells the truth and says no, but all of a sudden, the flaming jinn from the firestarter episode suddenly appears in the corner of the room — still visible only to Kristen. She asks Andy to step out, then tells Kurt her hallucinations are only getting worse. So he prescribes two new medicines. 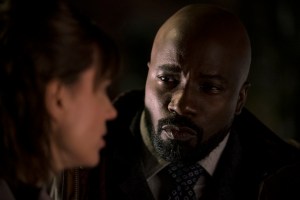 WHICH TEAM HAS POSSESSION? | Leland’s three-night exorcism kicks off with a surprise: He may actually be possessed. Twist! He’s doing his usual BS until, all of a sudden, he starts speaking in the voice of a little girl and then an older woman with an accent. THEN he kicks one of the attendants across the room in a fit of atypical strength, and David. Is. Shook.

So he asks Kristen to come the following evening. “Do you think Leland is starting to take his exorcism seriously?” she wonders. “No,” he replies. “I think God is.” But first, they return to the New Ministry of Satan for a follow-up. That’s where they mean Bishop Jim, who’s doing a run-through of some unholy ceremony but stops to get into a religious pissing match with David. Meanwhile, Graham and Kristen flirt via mutual irritation. Then she goes home, pops her new pills, blows off Andy for dinner on his penultimate night in town and heads out to Leland Night 2. 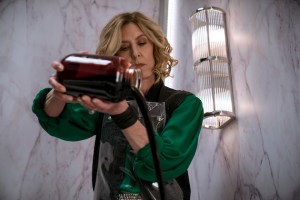 DO UNTO OTHERS | Something is seriously amiss at the ceremony, starting when Leland vomits black ichor that seems to writhe like worms on the floor. But he’s not the only one who’s in a bad way: Kristen, too, is sweating and nauseous as the exorcist chants the rite. After she starts to gag, she runs to the bathroom, where she realizes she’s bleeding from the abdomen. Are those cross burns somehow leaking? NO, NO IT IS SO MUCH WORSE. She lifts her shirt to reveal a giant gash across her torso, out of which spill all of her insides and a nightmarish, dark blob covered in goo that squeaks at her. Sorry, Cornfield Abomination From Season 1, you’re no longer the most disgusting thing birthed on this show.

“It’s not real!” Kristen says to herself, crying — and she’s right. Still, she’s freaked out enough that she runs from the exorcism and drives to a bar, where she orders a tequila. Graham walks in a moment later, announces that he’s been following her and that “I don’t really believe, and I don’t think you do, either.” So she shoots the tequila, says “Let’s go” and has angry sex with him in her car.

Sheryl catches Kristen slipping her panties back on before she comes in the house. Though Kristen denies anything untoward happened, her mom gives her advice on how to clean up so that Andy won’t know, adding that she did the same when she cheated on Kristen’s father. Kristen winds up doing exactly as she’s told, though maybe the meds aren’t doing their job? Because she storms into Kurt’s office the next day, accusing him of working against her, sleeping with Sheryl and handing Kristen’s therapy notes over to Leland last season.

Oh, and if you’re wondering how Leland is doing as the third night of his exorcism looms, the answer is: not well! He calls Sheryl in a panic, shaking and crying, and she eventually agrees to come over and pour him a bath of blood to restore his swagger. 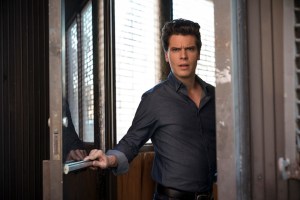 HOT TOPICS | The next time David, Kristen and Ben meet with the IRS representative, they tell her that the ministry was a T-shirt company before it was a church, and that all of its net earnings go to one person: Graham. Therefore, they advise that the group not receive tax-exempt status. It turns out that Graham and Bishop Jim are there to argue that the team is biased. Also: “Kristen slept with me last night, and now she wants to hurt me,” Graham tells the room. Kristen instantly and coolly denies it. “I would rather sleep with Satan himself,” she says, prompting Bishop Jim to say that Satan is coming for all of them. “Take care,” he sneers on the way out.

On Leland’s final night of exorcism, he’s back to his usual ridiculousness… but Kristen is writhing on the bathroom floor, gripping her belly, crying and puking a little. As the priest asks Leland the questions involved in the rite, she answers them in a whisper. And when we get to the last one (“Do you claim the protecting power of God?”) we don’t quite know if she answers. 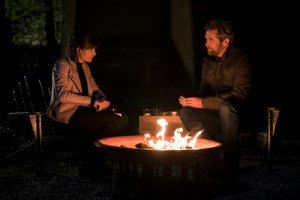 But afterward, as Leland is mocking the rosary that the exorcist gives him, something seems different for our favorite forensic psychologist. David suddenly realizes that she’s been missing for a while, so he checks the bathroom and she comes out. “Are you OK?” he asks, concerned. “I am,” she replies, tearful but smiling. Outside, they share some fries and she wonders aloud if an exorcism can work on you if you don’t believe in God. But before they can parse that too much, she realizes Andy is about to leave — and she’s not home to say goodbye.

So she speeds home, leaving him a teary voicemail about how she’s been “off” but that “you and the kids are the best things that ever happened to me.” And when she gets home, he’s still there, sitting near a firepit in the backyard. (He got her voicemail and moved his flight to the next day.) 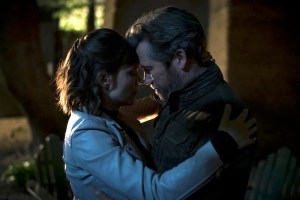 It’s his idea to take part in a Tibetan Buddhist fire puja ceremony, in which they’ll both write down something that they want purified on a piece of paper. Then they’ll dip the paper in butter and toss it in the fire. She writes “I cheated on Andy.” We don’t see what he writes. The idea is that they’ll never mention what’s on the paper to each other, and they’ll have a fresh start after he comes home from selling their business. (Side note: I feel dumb, but help me out here – she has two pieces of paper, right? And he doesn’t see what she wrote, but at one point, he looks down and then gives her a weird look… what is that about, do we think?) After the paper goes up in flame, they kiss.

Is it a coincidence, do you think, that the sparks that result from the fire puja are exactly the same color as the sparks coming off the jinn’s head when it pops into Leland’s bedroom soon after? “Heyyyy,” Leland says to the fiery apparition.