Warning: The following contains spoilers for Sunday’s penultimate Season 5 Animal Kingdom. If you’d rather be surprised when you watch, vamoose.

As Season 5 of Animal Kingdom neared the finish line Sunday, so it seemed did a character who’d been in Smurf’s orbit since the 1980s (and on the show since Season 3). Who left Pope so steamed that he ended the episode cleaning his gun as if for a special occasion? Read on and find out…

‘I’M GONNA NEED YOU TO DO THINGS FOR ME FROM TIME TO TIME’ | In our ‘80s flashbacks, Janine got the bright idea to hit the bar of the guy she’d just killed. (Max, we hardly knew ye.) And though it might’ve seemed nuts to you, me, even Jake and Manny, it actually was pretty clever, because the gang scored not only greenbacks and firearms but a little black book full of the names and numbers of every criminal in the area. With that, Janine reckoned, they could start their own empire, one that didn’t just take, take, take from its operatives but cut them in. “It’s a shame Colin’s not here,” said Jake. “Maybe he could talk some sense into you.” But as we all know, the joke would wind up being on Jake, since the future Smurf did end up becoming the queenpin of Oceanside. In the present, miraculously, J and Pope’s byzantine plot to get rid of Livengood’s body worked. If they could just get Chadwick off their backs and rob the hawala’s bank before he found the tracker in Frankie’s $30k, they’d be home-free. (OK, that’s a couple of big ifs.) 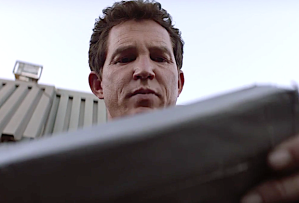 While Pope and Craig — when he wasn’t snorting anything that even resembled coke — went to buy some time with Chadwick, Deran and J went to scope out the port. As Craig’s frenzy to score grew ever more intense, Pope called him on it and warned, “If they find out you’re using, they won’t let you see Nick at all.” Which was kinda what was driving him to make it snow in the first place — missing his son. At their rendezvous with Chadwick, the cop was displeased. “You came to find me without my money?” he said as menacingly as anyone with that baby face could. The Codys had till EOD the following day to deliver not only what they owed but a bonus for offing a fed. (The guy has more hidden charges than a freaking cable company!) Afterwards, Pope swung by Pete’s flunky Ralphie’s to force him at gunpoint to sell him his car. Fine, fine, said the scared mechanic. He just needed to get something out of the trunk — oh, s—t, all the coke that the Codys stole from the cartel! The same coke that Pete had said he’d flushed! 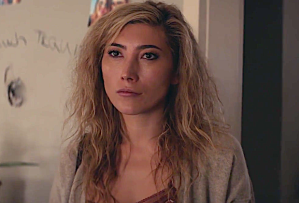 ‘A KID SHOULDN’T SEE HIS FATHER LIKE THIS’ | At the port, Deran and J deduced that… wow. Yeah, hitting the port with all its security was going to be tough. Which you’d kinda think they’d have known even from scoping it out at a distance last week. But they didn’t get to wear their Bob the Builder costumes for that, so… Returning that evening, they deduced that… mm-hmm, mm-hmm, job still hard. “Do you think Smurf would’ve done it?” asked J. Shrug, replied Deran. Back at Craig and Renn’s, he was playing out a scene from Valley of the Dolls, popping pills like they were Dippin’ Dots. When Frankie showed up to crash — or as I read it, to hide from Vladik — she read Craig the riot act for being so f–ked up. “I told you this was my last chance,” she cried. “I need you right.” Good luck with that, kid. 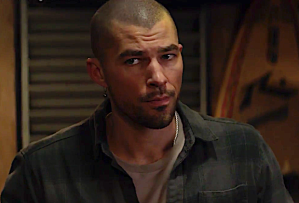 Called away from a discussion with J about how the Codys running businesses could be a more efficient way of laundering money than Smurf’s was, Deran met FBI Agents Perkins and Gonzales outside The Drop. The topic: Livengood, of course. Keeping as cool as a freshly poured beer, Deran told just enough of the truth about his contentious relationship with the DEA agent and “roommate” Adrian that it appeared that the feds bought it. Afterwards, Tommy questioned Deran about the FBI being there and went so far as to ask point blank where Adrian was. In response, Deran told the bartender literally everything — a move that seemed like a colossal mistake, no, considering the way that the camera lingered on Tommy as the scene ended? Undercover DEA maybe? 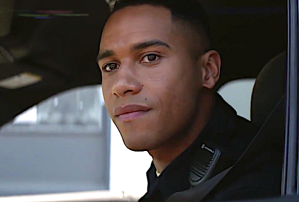 ‘CATS ARE BARELY DOMESTICATED; DID YOU KNOW THAT?’ | Since the authorities had come to believe that Livengood was killed on the job, the Codys agreed that they should pay off Chadwick and, in essence, fire him. Wait, fire him? Then why pay him? balked Craig. “He needs a reason to walk away,” Pope noted. When he and J went to deliver what the cop didn’t know would be his final payment, his knickers were in a knot from the start. “All you had to do was get rid of a body,” grumbled Chadwick, “not start an international investigation.” He wasn’t opposed to taking the extra $4k that Pope gave him as a parting gift but pushed back on the idea of cutting his ties to the criminals. Take the money and run, Pope suggested. “We have other ways of cutting ties, but I don’t think you’d like ‘em.” In the end, everybody threatened each other, and they went their separate ways… for now. 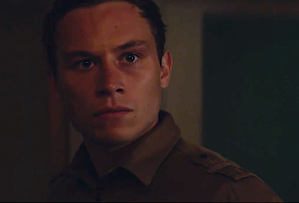 As the episode drew to a close, Craig, missing Nick and stinging from Frankie’s scoldings, actually passed on a chance to get high. Elsewhere, pigs flew, and it snowed in hell. At the Cody house, Deran and J agreed that, despite the difficulties, they should still hit the port. Did any of us really doubt that they would? Finally, Pope and J talked about gun maintenance and how J was smart like Baz and yada yada, and BTW, Pope finally added, “Pete never flushed the coke.” Cut to J’s shocked expression (pictured) in 3, 2… And what did you think of “Loose Ends”? Tommy is totally an undercover DEA agent, no? Or is he just gonna use Deran’s confession to make the fatal mistake of blackmailing him? Who do you think won’t survive the season? Pete? Frankie? A Cody? Comment away.