One of The Conners was conspicuously missing from Wednesday’s live Season 4 premiere — and now we know why.

While Becky was in attendance at a “sober retreat,” portrayer Lecy Goranson was in attendance at a charity gala. In a new interview, the actress shares that she was allowed to miss the live show to return home to her native Chicago to participate in the Canal Shores Invitational, an annual gala for first responders hosted by fellow sitcom vet Joel Murray (Dharma & Greg).

“Unfortunately, the event didn’t happen last year because of COVID, and it just so happened that this year, it fell during the live show,” Goranson tells TVLine. “I was very, very torn, because I love the show, and it’s my job — and I did miss my Conners family very much. But I was very, very happy to be present at the charity event. This was my third year going, and it’s just a wonderful thing to be a part of. It’s important for me to connect with those who are putting their lives on the line for people every single day, and to show my support is something that’s a priority for me.”

Goranson will resurface in the Wednesday, Sept. 29 episode, when Seinfeld vet Jason Alexander makes his debut as the unconventional Pastor Phil, a speaker at Becky’s Alcoholics Anonymous meeting. 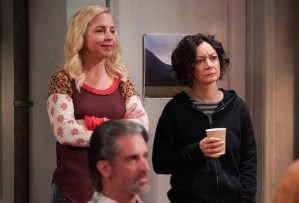 “Becky sees him as a truth talker, not someone who’s dancing around things,” Goranson previews. “He’s really gritty, to the point where [there’s no] filigree to what he says.” Becky is so impressed, in fact, that she introduces the pastor to Darlene, who is currently in need of some spiritual guidance following her break-up with Ben. “She says to Darlene, ‘Look, this guy is the real deal. He’s not pretending to be someone he’s not… You wouldn’t believe that he’s actually a pastor.’ And it turns out that Darlene gets what Becky is saying,” Goranson reveals. “She gets a kick out of him, and they have their own special bond.”

Becky, meanwhile, is fully enrolled in school this year as she attempts to get her life back on track. And as she reengages in academia, the single mom rediscovers a part of herself that has long been dormant. “It brings back her old self that’s kind of nerdy, and used to be a straight-A student,” Goranson teases. The “dichotomy” between who Becky was, and who Becky had become, she says, “is really interesting.”