Crockett Island is a tiny, isolated community where residents cling to their faith in God, their reliance on the commercial fishing industry or a combination of the two. This sleepy enclave is where Midnight Mass, Mike Flanagan’s latest Netflix series, takes place — and even before the horror shenanigans get started, there’s a lot that’s scary about the place.

But I’m getting ahead of myself. In Episode 1, we’re introduced to Crockett Island via the return of Riley Flynn (played by Friday Night Lights‘ Zach Gilford). Riley grew up there but fled as soon as possible, eventually making a bit of money in stocks and a start-up on the mainland but losing everything after he got drunk, got in his car and killed a young woman named Tara-Beth. Riley is sentenced to serving time prison; at night, he is haunted (though seemingly only in his mind) by visions of the girl’s dead body, complete with police strobe lights reflecting off the bits of glass embedded in her face. 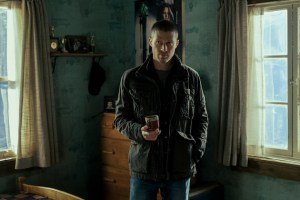 When Riley is released four years later, he returns to Crockett Island not out of a sense of comfort or relief but rather because he has nowhere else to go. His mom Annie (Altered Carbon‘s Kristin Lehman) and brother Warren (newcomer Igby Rigney) are happy to have him back; his father, Ed (Flanagan favorite Henry Thomas — whom I didn’t recognize at first) deeply disapproves of his older’s child’s wrongdoings and makes his feelings known.

Around the same time Riley comes back, a mysterious man with a giant trunk arrives on one of the two daily ferries from the mainland. When the man gets to a house, he enters and drags the trunk in after him. He kneels next to it, bangs on the trunk twice — and whatever is inside bangs back.

Also around that time: Warren and some friends canoe to the uninhabited northern part of the island, which is mostly overgrown old homesteads populated by stray cats. The teens, except for Warren, drink and smoke weed, joking about a local legend called Harpoon Harry. And when some cats in the underbrush nearby make a ruckus, Warren shines his light in their direction and freaks out when he thinks he sees something. (I had to pause the playback on this one, but it kind of looks like a large man with shining eyes.) But the thing isn’t there when he looks again, so he laughs the whole thing off. 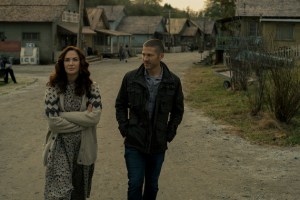 We haven’t yet dealt with Beverly Keane, a deeply devout lay person who essentially runs the island’s Catholic Church, St. Patrick’s. She’s surprised when Monsignor Pruitt, the parish priest, isn’t aboard Riley’s ferry; he’s expected back after a long trip to Israel. As we later learn via dinner conversation at the Flynn home, Pruitt was 80 and senile, prone to wandering around, disoriented, at night. When (former altar boy) Riley and (current altar boy) Warren joke about it, the conversation infuriates Ed. He tells Riley, who’d previously said he wasn’t planning on attending church while home, to do so — and to consider it a condition of his parole, much like the mandatory Alcoholics Anonymous meeting he must go to once a week on the mainland. 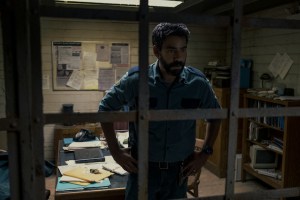 Along the way, we meet some of the town’s other residents. There’s Mayor Wade (Battlestar Galactica‘s Michael Trucco), his wife, Dolly (The Bletchley Circle: San Francisco‘s Crystal Balint) and their daughter, Leeza (newcomer Annarah Cymone), who uses a wheelchair to get around; town physician Dr. Sarah Gunning (The X-Files‘ Annabeth Gish) and her dementia-suffering mother, Mildred; town drunk Joe Collie (The Haunting of Hill House‘s Robert Longstreet); lone Crockett Island lawman Sheriff Hassan (iZombie‘s Rahul Kohli) and his teen son Ali (newcomer Rahul Abburi), whose Muslim faith is a frequent topic of conversation in the mostly Catholic town; and Erin (Flanagan favorite — and wife! — Kate Siegel), whom Riley dated when they were teenagers and who is now single and 20 weeks pregnant with her first child.

We also learn that Crockett Island was hit hard by a nearby oil spill several years before; the local fishing industry hasn’t been the same since, and several families have just left without even trying to sell their properties. “This isn’t a community anymore, honey,” Annie sadly tells Riley. “It’s a ghost.” 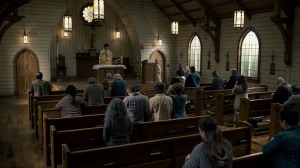 On the eve of a giant storm, St. Patrick’s parishioners gather for Mass. A young priest who is decidedly not 80 nor senile walks in at the start of the service and introduces himself as Father Paul Hill (The New Adventures of Old Christine‘s Hamish Linklater). It’s the man we saw rapping on the trunk. He says the Diocese sent him after Monsignor Pruitt fell ill and had to be hospitalized on the mainland. However, “I assure you, there is absolutely nothing to worry about,” Father Paul tells them. “This is a temporary situation.”

Afterward, Bev Keane (The Haunting of Hill House‘s Samantha Sloyan) — whom you can already tell is a stickler for rules — calls out the priest for wearing a gold chasuble (or ceremonial robe) instead of the green one usually worn during ordinary time in the Catholic calendar. He says he couldn’t find the green one, and he laughs a bit, but sometime definitely seems off about him.

As the storm rolls in later, we see Father Paul reading on his couch, trunk open next to him. At the Flynn home, the power goes out. Not long after, Riley sees someone standing on the beach, wearing a long coat and hat. He’s sure it’s Monsignor Pruitt, even though he’s not supposed to be on the island. Riley runs out in the maelstrom, trying to catch the man. At one point, during a lightning flash, the man looks back, but then he runs faster away from Riley.

The next morning, a huge flock of seagulls are going absolutely bonkers over whatever has washed up on the beach. And when the Flynn family goes to investigate, we see a ton of dead cats littered among the shoreline as far as the eye can see.

Now it’s your turn. What did you think of the premiere? Grade it via the poll below, let us know if you’ll continue with the season, then hit the comments section with your thoughts!