Det. Elliot Stabler goes undercover in Law & Order: Organized Crime‘s Season 2 premiere. Sadly, unlike one of his previous UC gigs, neither gibbons in basketballs nor Olivia Benson in her undies make an appearance in the episode.

On the plus side, however, Stabler does make it through the hour without being shot — which is a plus! — though the way things are going as he infiltrates an Albanian drug ring, we can’t promise it won’t happen next week. Read on for the highlights of “The Man With No Identity.”

JUSTICE IS(N’T) SERVED | The episode opens with Richard Wheatley’s appearance in court, where nearly all of the criminal counts against him are dropped, thanks to his cooperation with the New York Police Department. But he’s still got to go back to his cell to await his trial for the murder of Kathy Stabler. “Hey, where’s your boyfriend, Stabler?” he taunts Sgt. Bell before he leaves the courtroom.

Funny you should ask! The next thing we see is a drug run gone bad, in which a partially obscured bald man (who could it be?) with prominent ears (no, seriously! Who’s that man?) and a goatee (COULDN’T BE STABLER HE’S CLEAN-SHAVEN) acts as wheelman until something goes sideways and a fight erupts between the criminals and the police who show up. As this elusive tough guy jumps into the fray, we see that — oh my stars! — it is our protagonist, who is rounded up and arrested with the other gang members. 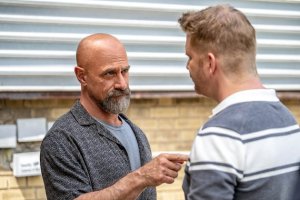 As we soon learn, Elliot has been playing the part of “Eddie Ashes,” an ex-con who is working with an Albanian drug operation. He’s managed to earn the trust of a gang member named Reggie (Ray Donovan‘s Dash Mihok), who is slowly bringing him closer to the power seat of the group. While in custody, Stabler gets a minute with Bell and lets her know that something weird went down with the bust; as we saw in the melee, the first cops that showed up to inspect the shipment handed off a duffel bag of drugs to two people on a motorcycle. But, because there were no drugs found during the arrests, everyone’s free to go!

It eventually becomes clear that there’s some internal NYPD messiness about the Albanian drug ring, thanks to a communication breakdown within the department, so Bell is tasked with co-commanding a joint task force with Narcotics. The problem: Her co-commander is a guy named Sgt. Brewster (Scandal‘s Guillermo Díaz), her former boss, and they do not like each other much.

Stabler helps Reggie figure out who made off with the cocaine, and it turns out that it was a highly organized rival drug ring called Marcy Killers. He also meets Reggie’s mom, who makes Stabler drink Albanian coffee so she can read his grounds. Eddie explains that his mom doesn’t speak much, because she was shot in the head (!) a while back, but she’s perfectly fine otherwise. “She wants to know why you don’t tell her how you feel,” Reggie tells Stabler after his mom inspects the sludge from the bottom of the cop’s cup. When Stabler is confused, Reggie specifies, “the person you love.” This woman has known Elliot Stabler for all of two minutes, and even she is on the EO train. I like her!

THIS MEANS WAR | Even though El is undercover, he still has clandestine meetings with Bell and Slootmaekers, and manages to sneak in five minutes of dad time with Eli… albeit from his car around the corner from the kid’s school, like a creeper. Anyway, Eli just made the soccer team and appears to be settling in nicely, which is a relief. He also seems to be strangely (for a Stabler) in touch with his feelings; he thanks his pop for encouraging him to try out for the team, then says he misses him but adds that he doesn’t want Elliot to feel guilty for doing his job. Aw, what a good son!

Anyway, back to the threat of carnage! Once the Albanians realize that the Marcy Killers stole their coke, they declare war and outfit their guys — including Stabler — with very big, very scary guns. Meanwhile, the rogue Marcy Killers dealer who robbed the Albanians realizes he’s a dead man, so he contacts Mr. Webb (Forrest Gump‘s Mykelti Williamson), who happens to be lunching with Congressman Kilbride (This Is Us‘ Ron Cephas Jones). Webb steps in and, after the Albanians abruptly call off the war’s opening salvo, shows up at a backyard engagement party hosted by an Albanian bigshot named Albi. As Stabler watches from afar, Webb manages to subvert the violence, return to missing drugs to the Albanians and forge a new partnership between the rival crime organizations.

When everything’s calmed down and Webb & Co. have left, Albi asks Reggie whether he can trust Stabler aka “Eddie.” Reggie says yes, but Albi doesn’t seem convinced. 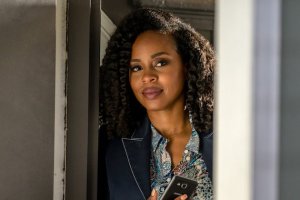 LOOK WHO’S ALIVE! | Angela Wheatley survived her attack (yay!) but at some cost (boo!): She’s weak, and her body doesn’t work the way she wants it to. At a safehouse, she seems to be pining a bit for Stabler. And when Bell brings up the idea of Angela testifying against Richard at Kathy’s murder trial, she looks physically ill.

Meanwhile, Bell’s wife Denise (who had their baby!) informs the sergeant that Congressman Kilbride wants to meet with them to discuss the lawsuit against the NYPD. Bell is suspicious that it’s nothing more than a political stunt, but Denise asks her to suspend that feeling and agree to the meeting. Kilbride wants to “reframe the conversation around police misconduct,” she says, adding: “He’s one of the good ones.”

Now it’s your turn! Grade the premiere via the poll below, then hit the comments with your thoughts!