The Goldbergs said goodbye to their beloved Pops in Wednesday’s Season 9 premiere, as each member of the family dealt with their grief in varying fashion. (Pops’ portrayer, OG cast member George Segal, died on March 23 from bypass surgery complications.)

Months after Pops passed away quietly in his sleep, Bill points out to Murray that his family is not handling the death well: Beverly has taken to calling herself an orphan; Erica is dismissive of Geoff’s wedding ideas; Barry is angry that Pops left him a pen instead of his cherished Super Bowl watch; and Adam is carrying around a doll that he plans to green-screen Pops’ face onto for their unfinished movie, Pops & Adam’s Excellent Adventure. 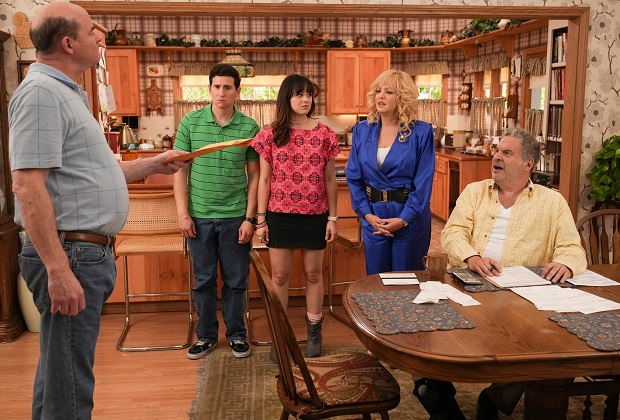 Bill suggests that they spread Pops’ ashes in his favorite place to heal, then fakes a letter from Pops with those instructions. But the family can’t figure out where that location would be. They start off at “his home away from home,” the racetrack, where one of Pops’ friends (Becker‘s Saverio Guerra) recognizes Bev from her picture. He points out that there’s a horse named Pop Goes the Weasel, which everyone (except Murray) takes as a sign. But when the poor horse gets injured, Beverly declares that they can’t spread her father’s ashes there.

The next stop is Pops’ favorite jazz club, where the proprietor (JAG‘s Scott Lawrence) has heard many stories about Bev. But it turns out the last time Pops was there, he drove into several cars and then some. Needless to say, Bev vetoes the site of Pops’ last car accident as a proper place to spread his ashes.

Near the jazz club is Pops’ favorite diner, where a waitress (NewsRadio‘s Vicki Lewis) reveals that she and Pops were lovers (or “human Tetris pieces,” as she puts it). As the family starts to bicker, with Barry and Adam fighting over the watch, Beverly realizes that the letter was fake. Murray admits to scheming to help them.

“It’s supposed to be hard. We lost somebody that we love,” Beverly says sadly, to which Murray replies, “But no one’s dealing with it.” Case in point: Bev won’t go out with her friends; Erica hates every wedding venue because they’re all missing Pops; Barry hates the pen because he thinks it means Pops was disappointed in him; and Adam is carrying a doll so he can pretend Pops never died. Murray admits that he also doesn’t know what to do after losing the man who gave him his business, his family and his happiness.

Adam tells Barry that the pen is the same one Pops wrote to Grandma with during the war, and that’s why he wanted him to have it. Then Adam admits that he knows Pops’ favorite place: It’s the tree where he proposed. Pops used to say that everything that blossomed in his life took root there, Beverly recalls. So it’s fitting that Erica decides that’s where she wants to get married. 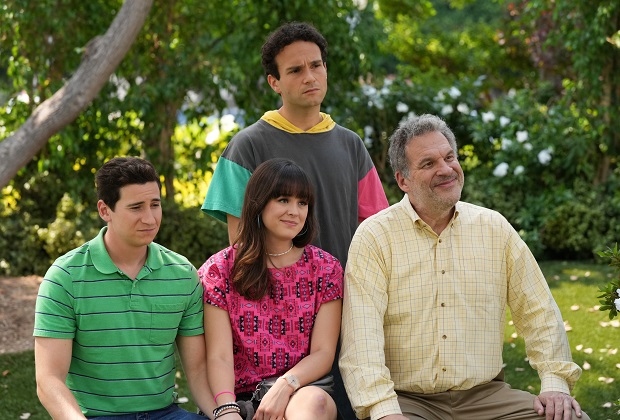 As the family prepare to spread Pops’ ashes, Adam says some words from Bill & Ted’s Excellent Adventure that encompass how Pops lived his life: “Be excellent to each other, and party on!”

With that, the Goldbergs start moving on in healthier fashion — Bev is ready to begin wedding planning, uh-oh? — and watch a home movie of Pops, in which he says, “I realize we shouldn’t dwell on the loves we’ve lost, because there’s more than enough love right here.”

A dedication card to Segal follows, then footage of the late actor singing and playing banjo on set.

Goldbergs fans, what did you think of the send-off? Grade the episode, then hit the comments.