The entire family now knows that Tom is writing a book about them, so in Home Economics‘ premiere Wednesday, the author notes that it feels like the Hayworths are “entering a new season together.” (We see what you did there, Tom.)

The Season 2 premiere also finds Connor getting luxury suite tickets to a 49ers game at Levi’s Stadium. But he only has a limited number of sports, so he supplements with some tickets in the stands, and they all head to the event.

The outing is a blast for everyone except Tom, who worries about his lack of sports knowledge… then overcompensates for it by mansplaining special teams to legendary wide receiver Jerry Rice, whom Tom runs into in the suite but doesn’t recognize. (Come on, man. Not even from Dancing With the Stars?!) Connor is so done with his brother, he tells him to go down to the regular seats and send Sarah up in his place. So Tom does… just as his seat is picked for a halftime kick contest.

Football superfan Marina tries to psyche her husband up for his moment in the spotlight, but he’s so nervous that he tries to go home before the kick. Upstairs, Connor overhears some of his business contacts mocking Tom, so he heads downstairs and stops Tom from leaving. He gives him a pep talk where he admits that yes, he and their dad did always bond about sports… but that was because it was the only thing they had in common; in comparison, young Tom was very good at nearly everything else. 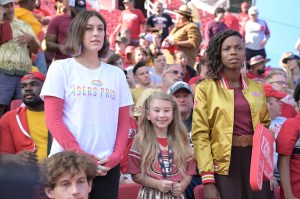 Boosted by this chat, and with Connor holding the ball for his brother, Tom takes to the field and kicks the ball exactly where it’s supposed to go. Unfortunately, in doing so, he winds up landing flat on his back — and, of course, that’s the highlight that makes ESPN the next day.

Elsewhere in the episode, Sarah is dismayed to learn that her daughter, Shamiah, wants to try out for her school’s cheerleading team. But Denise points out that, were their son Calvin to do the same, Sarah would see the move as pioneering. So Sarah reconsiders, nearly pulls a hamstring while cheering for Tom, and makes sure that Shamiah knows that trying out for the cheerleading team is totally OK.