Here’s the good news for fans of The Resident‘s Nic Nevin: As of Tuesday’s Season 5 premiere, at least, Nic is alive and well and getting some much-needed rest at a spa retreat out of town.

The bad news? Even though Nic is still part of the show during the season opener, the episode heavily suggests that her eventual exit will be unexpected and heartbreaking, making it tough to enjoy even the sweetest moments of Conrad’s stint as Mr. Mom during the hour.

Last month, the news broke that original series star Emily VanCamp is leaving the medical drama after serving as its female lead since the pilot episode. Despite her on-camera absence, though, VanCamp’s voice is heard during a phone call between Conrad and Nic early in Tuesday’s premiere, in which Nic worries that baby Gigi will have a hard time adjusting while Mama’s out of town. Nic will be home from her spa trip the following night, though — at least, that’s what we’re led to believe for now — so Conrad only needs to fly solo for about 36 hours.

Conrad balances his chaotic work day with the temporary single-dad life as best he can, and he appreciates his sweet daughter even more after watching a father nearly lose his 14-year-old child at Chastain that afternoon. In a gut-wrenching twist, the teenager pulls through, but her dad later experiences a heart attack and dies during surgery. (Tear ducts working overtime here, folks!) But before that happens, the father reveals to Conrad that his wife left when their daughter was just one year old, and he can’t fathom life without his daughter when it’s just been the two of them for so many years. Then, at the end of the hour, Dr. Austin gets emotional thinking about all the life milestones that the young girl will now have to experience without her father by her side.

That’s a whole lotta foreshadowing about the unexpected loss of a loved one; at this point, given the premiere’s themes and the cops who arrive at Conrad’s door in the Season 5 trailer, my guess is a car accident or similarly sudden tragedy might claim Nic’s life on her way home from the spa. To pour a little salt in that inevitable wound, Tuesday’s episode ends with Conrad watching Gigi while she plays before bed. He checks his phone to see two missed calls from Nic, plus a text from her that reads, “Love you. Going to sleep. Talk tomorrow.”

“Sorry we missed your call,” he writes back. “Can’t wait to see you tomorrow.” And when Gigi calls for Mama when Conrad sets her down in her crib for the night, he reminds her, “Dada will have to do until tomorrow night.” A moment later, Gigi finally repeats, “Dada,” and Conrad beams. 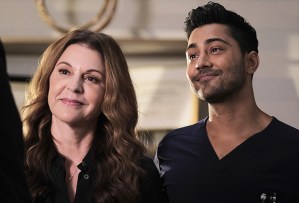 Other developments from the premiere:

* Chastain Park becomes the target of a ransomware attack, which quickly and significantly affects patient care across the board. Fortunately, Devon remembers a coding-savvy college friend of his who specializes in warding off phishing scams, and he brings her to the hospital last-minute to (successfully!) thwart the cyberterrorists.

* After a long and intense day at work, Bell invites Kit to grab dinner with him, but she awkwardly declines. On the bright side, both docs look back at each other longingly on their way out of the hospital — and hey, there’s hope yet for these two!

* The episode takes place after a nine-month time jump, and Devon and Leela are now in a fully committed relationship after their hookup in the Season 4 finale. Devon even suggests they move in together, “and I can wake up to you every single day,” he tells Leela. Swoon. But by the end of the hour, Devon’s life is suddenly in jeopardy, too: Realizing that one of his patients from that day — a blind man who was last seen waiting on a cast for his broken arm — never signed himself out of the hospital, Devon goes looking for the man and finds him unconscious in a janitor’s closet, where there appears to be some kind of gas or chemical leak unfolding. Devon calls out for help, but the entire hallway is empty… and the leak is quickly making Devon cough, too.

Now that you’re worried about multiple Resident characters, it’s time to weigh in on the season premiere. Grade the episode in our poll below, then drop a comment with your reactions!