Although much has changed for NCIS as the CBS mainstay enters its 19th season, the plan is to give faithful fans the familiar show they have long known and loved.

Among the on- and off-screen shifts: Two characters were written out last spring, a pair of series regulars have been added for fall, Gibbs’ suspension took a deadly turn when he and his new boat went boom…. And on top of all of that, TV’s most watched drama has been handed its first time slot change ever, moving from Tuesday’s leadoff spot to Mondays at 9/8c (beginning Sept. 20).

TVLine spoke with showrunner Steven D. Binder about navigating this transition, bringing the big orange room’s “band back together,” and inviting fans to rediscover a familiar favorite when they now tune in on Monday nights. (Tiny bits of this Q&A have previously appeared in TVLine scoop and Fall Preview columns.)

TVLINE | We said goodbye last season to Jack (played by Maria Bello) and to Bishop (Emily Wickersham). You have since added Katrina Law full time, as well as Gary Cole, and we’re reportedly getting a bit less Mark Harmon. How does this season rank as far as the challenge of transitioning?
The biggest transitions we’ve had to face were last season — trying to find a fitting end to the Jack Sloane character and then a fitting end to the Ellie Bishop character. Now, Katrina’s here, so we’re getting a chance to get to know [Agent Jessica Knight], but as you might imagine, there’s some cleanup work we have to do based on the season finale that takes precedence over the more subtle character moments. Gibbs blew up in his boat, so we’re not going to open up with light banter in the squad room.

The Biggest NCIS Exits of All Time, Ranked

TVLINE | How much time has lapsed since Gibbs went boom?
We’re going to go fairly real time. We decided it’s too interesting of a moment to skip ahead of unless you’ve got a really good reason to do that, and we didn’t.

TVLINE | As I noted after the finale, Gibbs swam away on his own volition after “playing dead” for what seemed to be a purposeful amount of time. Did I read that right?
Yeah. We shot a lot of different things for that and there were a lot of different ways to cut it, and what we left with was something that we felt in many ways left all possibilities open. You see someone swimming away with purpose but he was pretty badly injured. Just speaking from experience, I got nailed by a car when I was 10, and if asked me how I was doing, I’d tell you I’m fine, and I wasn’t fine. So, all things are still possible with Gibbs. He’s not dead and we know he’s able to swim well enough to do that broad stroke we saw, but any number of levels of injury were possible for him at that point.

WATCH A SNEAK PEEK FROM THE SEASON PREMIERE

TVLINE | Is there anything else you can share about what Gibbs is up to when Season 19 opens?
Well, he’d been hunting down a serial killer, with a reporter (Marcie, played by Pam Dawber) who doesn’t really necessarily have the tools to deal with a serial killer. And he’s been cut off from his team, from that portion of his world. In the beginning episodes, that’s going to change. We’re going to “bring the band back together” to some degree so they can do what we have liked watching for 20 years, which is these people solving crimes together. 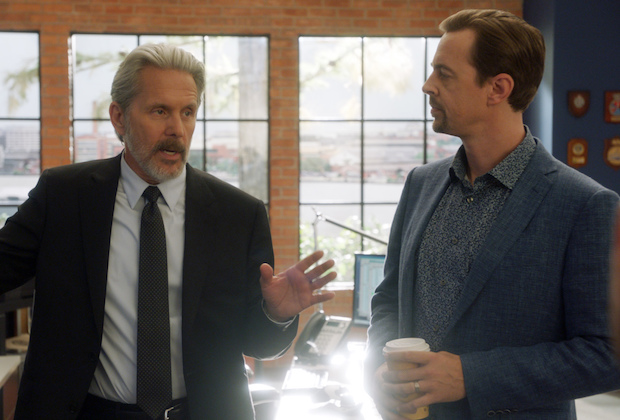 TVLINE | It was made very clear that Gary Cole’s character, FBI Special Agent Alden Park, is not “replacing” Gibbs. But is he there to fill a void as “the well-seasoned law enforcement agent”?
This is something I’d been saying we should do for a very long time, and when I took over as showrunner it was like, “We’re going to do this” — and then we just didn’t for a little while. I have been saying that we need to populate more characters in this show, in the vein of Joe Spano who plays Fornell, Muse Watson who plays Mike Franks…. The way you get those people who are really fantastic characters is you bring people in and you try them out and you see how it goes.

That was what initially motivated [the casting of] Katrina [Law]. With Gary Cole, you can almost imagine [that Agent Park] may be too close to Fornell in a lot of ways — he’s from the FBI, he’s in the same demo — but that was the initial impetus for bringing in characters. And we’re trying to do that this season with a little more forcefulness, bringing in people in the building who you haven’t necessarily seen but you know have been there doing stuff. And if something clicks, we’re like “OK, let’s bring that person back.”

TVLINE | But now some fans are worried that we won’t see Fornell again.
I can tell you that we will be seeing Fornell for as long as Joe Spano would like to be on the show. He’s just fantastic. We have him at least in one [Season 19 episode] and possibly more. Possibly more.

TVLINE | What do you want to say about Mark Harmon’s reportedly reduced presence as Gibbs this season?
I’d say that a lot of things are reported on the show that aren’t necessarily true. We are focusing right now on telling the best stories we can with the characters we have, and Gibbs is a part of that world, and I think we’re doing a pretty good job with that. It’s a little more complicated under the COVID regulations we’re under again, but one of things that we felt was missing in the last half of last season was that we had broken our band up and we wanted to get them back together. That’s really what we’re focusing on now.

TVLINE | I’m surprised to hear you say that, because it sounds like Gibbs might become some form of team leader again.
I will tell you that it’s not necessarily in a form or shape you might have expected. It’s not typical, but it will be something that is ultimately really enjoyed. 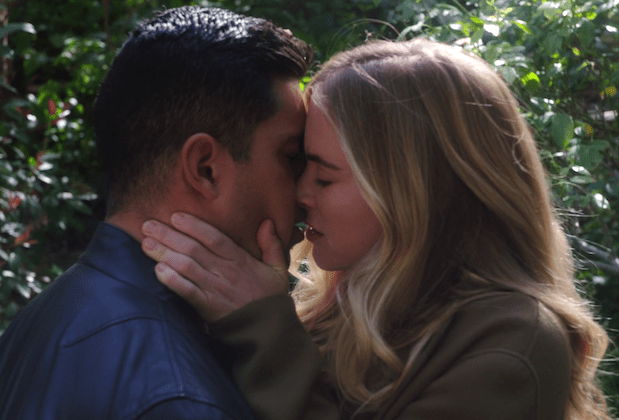 TVLINE | What’s the aftermath of Bishop abruptly peacing out on Nick and us?
It would be a really sad commentary on the Nick Torres character for her to just disappear like that and have it not affect him in some way. It could affect you in a lot of ways — you can be generally affected, you could be walking around telling everyone you’re fine and clearly you’re not…. But Nick Torres is tough exterior, soft interior, and we get a look at that soft interior.

TVLINE | Can you clarify what Ellie meant by when she said to Nick, “I didn’t mean for us to happen”? Was that not necessarily their first kiss?
I think there have been hints dropped along the ways that that was not their first kiss. And you will get some more hints of the extent of their relationship. Normal people might leave toothbrushes at the other one’s house, but Nick Torres might do things a little differently! You’ll get more clarification on exactly how far that relationship might have gone, although, as you could guess, when consenting boy adult meets consenting girl adult, and they like each other, things happen. 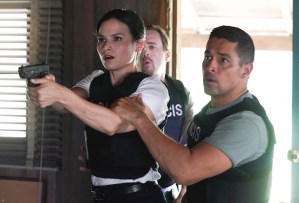 TVLINE | Once you’re done with the early-season “cleanup work,” will NCIS return to a typical Case of the Week format?
That’s the other thing we talked a lot about, and I will tell you that after we put some of these things to bed that we have been running with for a while, one of the things we said to ourselves was, “Let’s get back to some interesting cases without any overarching arcs.” Out of 400-plus episodes, 360 of them are described that way, but we’ve been not doing that for a while, so I think it’s time for us to sort of regroup and get back to telling good mysteries of the week with interesting characters, interesting stories, emotional hooks, and a satisfying ending.

TVLINE | Was going back to that trusted formula especially important with a brand-new time slot? So that if and when people do find you, they’re getting something familiar?
That could be a reason we would give, and it’s great that it worked out that way. As a writer working with writers, some of us are eager to get back to doing the things that we know. When we get off brand, that’s not what our training is in. Sometimes you get the more interesting episodes that way, because people get pushed past their comfort zones, but I think we’re all feeling it, too, that want to go back to what works. It’s a new time slot, so let’s not make everything new right now.

TVLINE | Any germ of an idea yet for doing a crossover with NCIS: Hawai’i at some point, to bridge the two shows on Monday night?
You know, I thought we left some good stuff on the table by not doing more of those in the past. I would love to do something like that, especially if I wrote it and got to fly to Hawaii while it was shot!

TVLINE | Hey, only if I in turn get to do a set visit.
[Laughs] Exactly. We haven’t discussed it yet, but I’ve worked with and known [NCIS: Hawai’i co-showrunner/former NCIS co-EP] Chris Silber for a really long time, so that always makes those sorts of things easier.

TVLINE | Lastly, is there any contingency plan in your back pocket in case someone decides that this is NCIS‘ farewell season?
There’s really a couple possibilities here. One is that we get cancelled tomorrow and then there’s nothing to be “contingent” about. The other option is that Gibbs is either solving cases in his 90s, or he gets a gold watch and retires. Neither of those things sound interesting to me, but at some point in time when that happens, if we find ourselves still on the air and people are thinking of retiring, you have to think about something befitting that character — and a gold watch ain’t it. But we’re not really thinking too hard at this moment about such things.

TVLINE | A handful of fans have been very doom-and-gloom, bleating “they’re putting the show out to pasture!” with a time slot change and all. I’m like, it’s TV’s most watched drama; it’s not going to lose its entire audience because of a time slot change.
That’s our reaction, too. When a show is on the bubble and the time slot changes, it’s usually to Sunday at 10 pm, and that’s not what we got. We got Monday, an hour later.

TVLINE | And you’re leading out of two solid sitcoms, and teeing up a buzzy new drama.
That’s right. We’re always the one leading in for everybody else, so I’m somewhat excited to be the show that gets a lead-in!

TVLINE | It’s pretty crazy, man. Nineteen years without a time slot change.
Yeah. Like you said, it’s a No. 1 one show, plus it’s 2021, not 1921. People watch TV differently now. As someone said to me, “Oh, it’s just going to be available a night earlier?” These days it’s not all about when a show drops. But you can watch it when it drops, and now it will be available to watch a night earlier, that’s how they thought of it.