The Morning Show kicks off Season 2 around New Year’s Eve 2020, and that’s a fitting metaphor for what’s to come for Alex, Bradley, Cory and the lot: blissful ignorance of exactly how much worse the circumstances are going to get.

I mean that both on a character level and for the world at large. Most of us in the United States had no idea, at the stroke of midnight on Jan. 1, how much our lives would change by the same time the following year. Similarly, after a brief nod to the emptiness of New York during the pandemic, the title card takes us back to December 2019, when the UBA gang is far more concerned with whose tush is in the anchor’s chair than with how they’ll survive a global pandemic.

And what’s Alex up to, after quitting in highly dramatic — and visible — fashion? She’s chopping wood at a cabin in Maine. And she’s done. Really. Seriously. DON’T EVEN ASK HER TO COME BACK, OK? Read on for the highlights of “My Least Favorite Year. 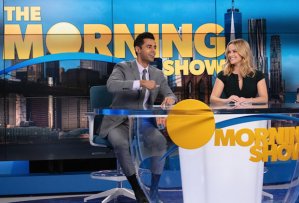 CORY FAILS UP | Immediately following the bombshell broadcast that ended Season 1, Cory is fired, and Fred is put on administrative leave. Cory gives a bombastic speech to the executives on his way out; “This is a battle for the soul of the universe!” he proclaims at one point.

Then the action hops back to Dec. 31, 2019, as Bradley and her new Morning Show co-anchor Eric (Patriot Act With Hasan Minaj‘s Hasan Minaj perform a cringey (though admittedly in tune) rendition of “What Are You Doing New Year’s Eve?” to promote their hosting the ball drop in Times Square the next evening. Bradley’s hair is blonde now, which she apparently did — along with the literal song and dance — to prove that she’s a company gal who’s willing to do what’s asked. But ratings are down, and everyone is on edge.

Despite being fired, Cory is not only back in the UBA building, but running the place. Wait, what? He’s all lit up about the UBA+ streaming service he’s planning to launch soon, so he barely hears Bradley when she comes up to his office and makes a point of asking to move into the nightly news anchor seat that has recently become vacant. She also points out that she was the person who got him un-fired, but we don’t get a lot more on that for a while. 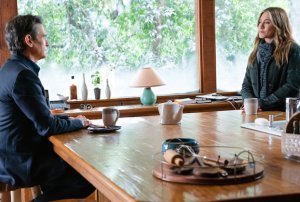 ALEX, ALONE | In a cabin in the snow, Alex is working on her book. She sends the finished manuscript to her agent, who is unsatisfied with the way Ms. Levy has chosen to gloss over a rather newsworthy part of her life. “Dig a little deeper in certain areas… about Mitch,” she suggests, adding that Maggie Brenner also is writing a book. If there’s any “personal history” between Mitch and Alex, the agent adds, now is the time to get out ahead of it.

Not long after, Cory shows up, uninvited and unannounced, and asks her to come back for a year. He gives her the hard sell, claiming the network is going to “rise like Venus out of the clamshell, and YOU ARE VENUS!” And while both the first and second seasons of this series are bewildering to me re: choices made, I will never turn down Billy Crudup’s absolutely bats–t line readings. They soothe my soul.

Unfortunately for Cory, Alex is far less moved than I am. “I would rather die than go back there, OK?,” she says. “Well, think about it,” he replies. (Heh.) 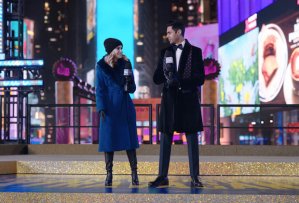 AULD ACQUAINTANCE | On New Year’s Eve, on a platform in Times Square, Eric’s conscience gets the best of him and he tells Bradley what nearly everyone else already knows: He, and not she, is the next anchor of UBA’s evening news. So by the time Cory shows up right before midnight, Bradley lights into him. She accuses him of not being the person he was, and in her anger, spits out, “You only have this job because of me!” He sneers, “Man, you’re just so certain you know how the world works, huh?,” accusing her of having a fragile ego. (To be honest, I’ve had worse New Year’s Eves.) The whole time, they’re standing in front of a screen showing fireworks from around the world, and it’s a bit on the nose, no?

Meanwhile, in Maine, Alex goes to a neighbor’s house for a party and has a consultation with a famous psychic (played by Hocus Pocus‘ Kathy Najimy) who is wrong about everything… except when she says, “You are carrying around a paralyzing amount of guilt.” Alex leaves right before midnight, and as she stands outside the party, she gets a voicemail from Cory that says “You have yet to do your greatest work.” She starts crying and calls him back. “Could you please come back and fill in until you’re ready to launch your new primetime show?” he asks. She doesn’t say yes but agrees to talk the next day. “Cory, can I trust you?” she asks tearfully. “Yes,” he responds, and the messed-up-rom-com nature of this scene is intense. After they hang up, she smiles.

Cory had told Alex that they were in the lurch because a deal fell through on a replacement Morning Show anchor, but that was a lie; after he hangs up with her, he calls Stella, the new head of the news division (played by Russian Doll‘s Greta Lee), and tells her to kill the deal for the new person. But before he can gloat too much, he looks up and notices a Midtown news ticker, which informs him that Hannah Shoenfeld’s family has filed a wrongful death suit against the network.

ELSEWHERE… | In case you were wondering about any of the other characters: Chip is producing news at a local station and has a girlfriend; Yanko runs into one of Claire’s friends and learns she’s studying for the GRE; and the novel coronavirus we’ll come to call COVID-19 is causing lots of problems in China, but Mia decides it’s not big enough news to cover in a rundown during the broadcast.