After two networks, eight seasons and a combined 153 episodes, Brooklyn Nine-Nine signed off Thursday with a grand finale that assured us that Jake and the squad would always be a part of each other’s lives. 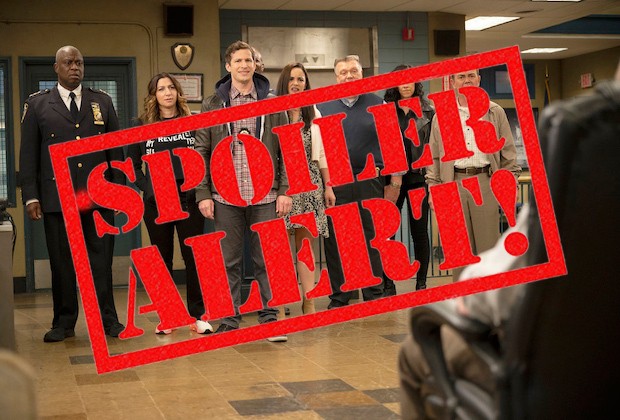 In the previous episode, the commissioner of the NYPD had approved Captain Holt and Amy’s police reform program, which would be implemented citywide. In turn, Holt was appointed deputy commissioner of police reform, and Amy came aboard as Holt’s No. 2, earning a well-deserved promotion from sergeant to chief.

Thursday’s hour-long swan song, fittingly titled “The Last Day,” revolved around Holt and Amy’s last day as members of the Nine-Nine. And to mark the occasion, Jake was granted permission to throw one last, non-holiday associated heist.

“These last eight years have been some of the best of my life,” Holt said ahead of the annual competition. “I will always cherish our time together… but not as much as I will drowning you all in your own blood. It’s the final heist, and I will chop off your limbs and feed them to your young.”

All past heists would be forgotten, and all that would matter was this year’s winner, who would be crowned “The Grand Champion of the Nine-Nine.” The victor would receive a medal of valor modeled after the medal Holt received for saving the life of Maya Angelou — but this one, Jake argued, was even better!

As it turned out, Jake, who had planned the heist well in advance, intended to use it not to mark Holt and Amy’s last day, but his own. He was going to announce at midnight that he was leaving the Nine-Nine, a decision that took even Amy by surprise when he first revealed his master plan. 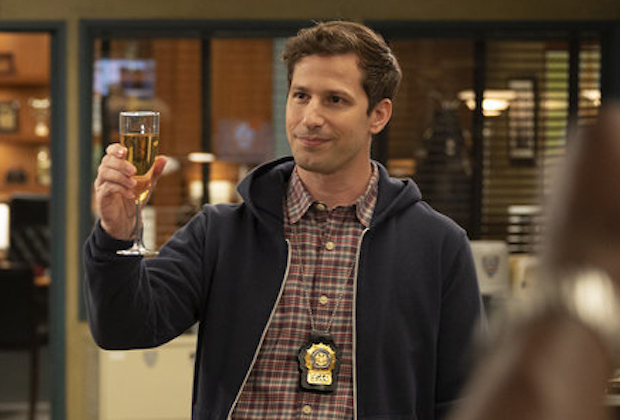 “For weeks, we’ve been trying to figure out how you can do your new job and still have us be there for Mac as much as we want. And I really think this is it,” Jake explained. They had other options, sure, but this was the best one.

“Look, you know I was scared about having kids because I didn’t want to be like my dad,” Jake continued. “But if I do this, I have a chance to be the exact opposite. I don’t want Mac to feel the way I felt growing up.” It was true that being a detective was all Jake ever wanted to be, but that had changed. “Now all I care about is what’s best for our family,” he said. “And Ames, this is it.”

The heist was to feature “drama, glamour, shocking twists and turns,” and the whole thing would end with the entire gang gathered at the Brooklyn Bridge for “the perfect goodbye.” (When Ames asked if they’d ever all been to the Brooklyn Bridge before, Jake alluded to the slow-motion walk in the opening title sequence, which was apparently filmed when the squad was out getting falafel.) 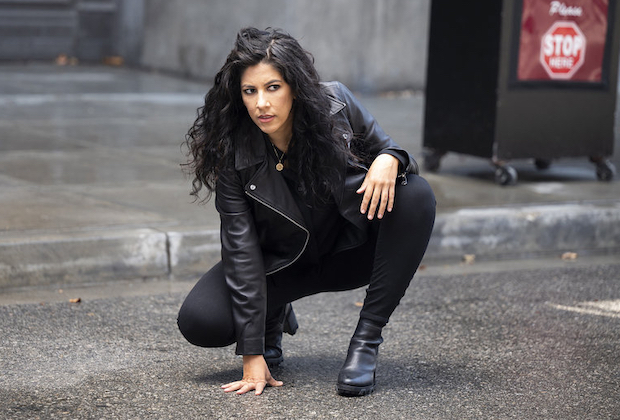 Jake had also coordinated for a fireworks display and a surprise guest at the end of the night: He had reached out to Bruce Willis’ people, who in turn told the detective that the Die Hard star “would not engage with something like that.” 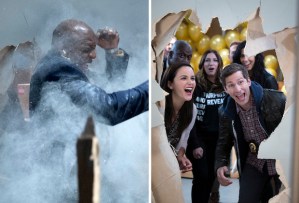 Jake’s plans for a “perfect goodbye” were ultimately foiled time and time again, with Amy determined to throw Jake a surprise party at the end of the night, and Holt determined to have the “perfect goodbye” of his own, which led the entire squad to the Brooklyn Storage Solutions, where they all worked together to track down a perp in the very first episode. Bill, who relied on the annual heists for income, was ultimately one step ahead of all of them, and locked them in a storage container along with Caroline Saint-Jacques Renard. But after Terry used his superhuman strength to “Kool-Aid Man” the squad to freedom, they returned to the precinct where they found none other than Hitchcock, who was crowned Amazing Human/Genius and Grand Champion of the Nine-Nine. (Turns out he hadn’t retired or moved to Brazil. He’d been living in The Beaver Trap this entire time, then Bill showed up at the precinct and sold Hitchcock the coveted vessel needed to win the heist for $40.)

Afterwards, Charles apologized to Jake, whose plan had been foiled, but Jake was A-OK with how things turned out. “I think I just wanted a big dramatic moment so that I wouldn’t feel sad,” he explained. “Because goodbyes are inherently sad. They mean that something’s ending. And this one is especially sad, because what we had was so great. But it’s not all sad, right? We’re moving on to things that we love. And we’ll have the memories of our times together… even though Hitchcock won the heist, which makes me so mad I want to swallow my own tongue and die.” 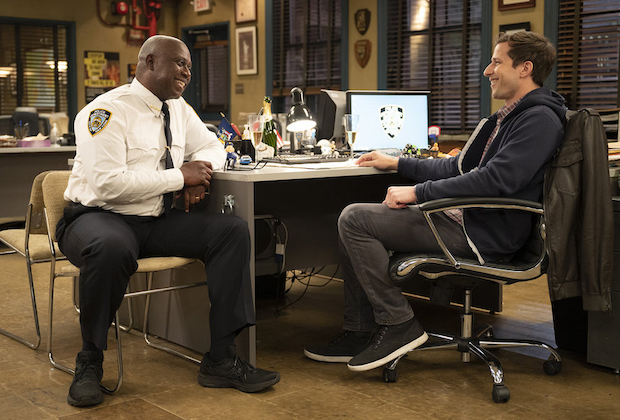 Later, Holt and Jake shared a heart to heart, where Holt reminisced about his very first day at the Nine-Nine. “On my first day here, I asked Jeffords to tell me about everyone,” he recalled. “He told me you were a great detective, but the one thing you couldn’t figure out was how to grow up. Well, I think you’ve finally figured it out. Over the years, you’ve sometimes referred to me as something of a father figure,” he told Jake. “But I want you to know, if I had had a son, and he had turned out like you, I would be very proud of him.” (Not bad for an old robot, huh?)

“I guess in the end, we rubbed off on each other a bit,” Holt concluded. “Title of your sex movie.” (Close enough!)

As the hour approached its end, Jake swiped his placard from his desk and followed the rest of the squad to the elevator. He attempted to turn the lights off as they left — perhaps a nod to Mary Tyler Moore? — only to be told that he couldn’t shut the lights off in an active police precinct. 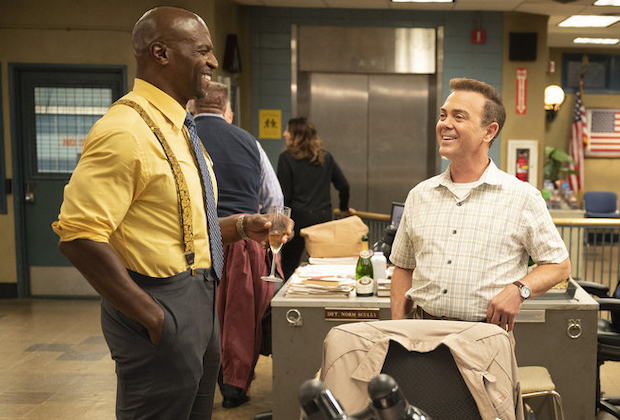 After the elevator doors closed, the show jumped ahead “about a year,” to reveal the newly promoted Captain Jeffords briefing Charles, Hitchcock and Scully, along with several new detectives. But he was quickly interrupted by Jake, then by Holt, Rosa, Amy and Gina, who had all returned for yet another Halloween heist. And as the tag scene drew to a close, the former squad joined Terry as they all proudly exclaimed, “Nine-Nine!”

That’s all, folks! Grade the series finale (and the final season overall) in the following polls, then drop a comment with your full review.