There is a subset of Evil viewers who like to remind everyone that men and women can be platonic friends, and that not every working relationship between two highly attractive and charismatic people turns into romance and/or sex.

And that is true! But it’s also looking more and more as though that wisdom doesn’t apply to Kristen Bouchard and David “Not a Father Yet” Acosta — as this week’s episode hints, heavily.

Full disclosure: I ‘ship the pairing. But even those who don’t would be hard pressed to deny that SOMETHING is shifting between the co-workers in “U Is for U.F.O.” Let’s recap this week’s hour and review the evidence, and then you can yell at me in the comments, cool?

THE TRUTH IS OUT THERE | We’ll start with the case of the week, which involves Capt. Samson, an air force pilot who believes she had an encounter with an unidentified flying object — or UAS, in her parlance, which refers to “unmanned aircraft system.” The craft operated in a way that known avionics do not, such as flying Mach 10 with no sonic boom. But the most intriguing part of her experience is that, as the craft seemed to fly “through” the captain’s plane, she felt nothing but joy and peace, and afterward, the salubrious effects on her blood pressure and hypertension were measurable and lasting.

She’s come to the Church because she thinks she might’ve gotten up close and personal to an angel. And, as Bishop Marx informs Ben, David and Kristen, “The Church is keeping an open mind.” So he assigns them to assess her credibility. Kristen talks to her commanding officer, who says the only thing the pilot saw was a commercial satellite launch. After some Internet-message-board trawling, Ben travels to Syracuse to meet with Asha, a teen who witnessed the event from the ground… though she freely admits she was super high on weed when it happened. 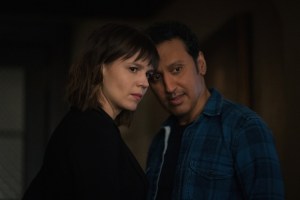 Though Kristen initially reports that the captain isn’t to be believed, she later reconsiders: What if the fact that Capt. Samson is a female in a male-dominated organization contributed to her story being sidelined? And when she checks with a neighbor who works for the company that allegedly launched the satellite, Kristen learns that there was no launch on that day. And after Ben makes a connection with another Air Force pilot who seems to know something, he gets his hands on footage of Capt. Samson’s encounter.

The video seems to show an object flying erratically, and at one point right before it disappears… is that a cross?! No sooner has he shared it with Bishop Marx than the rectory is crawling with Vatican representatives asking questions of Samson (sample: How did the encounter smell?) that make Ben realize something.

“This has happened before,” he whispers to David. “News to me,” David replies.

Apparently, the Vatican is super interested in the concept of alien civilizations because of what they might bring to bear on the idea of original sin. For example, if other beings exist, are they free of original sin? Or, as one priest puts it, “Are we missionaries, asked to share the gospel?” (Never one to let us down, our girl Kristen gives that one a hearty snort, side-eye and snarky comment.) 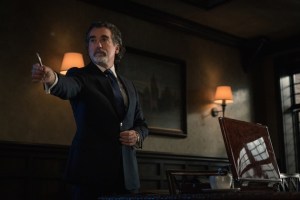 OR MAYBE IT’S NOT? | Eventually, a suit-wearing gentleman named Edgar Loudermilk shows up in Kristen’s driveway to tell her that what she saw on the video was Russian technology that the government is trying to thwart: “In other words, ma’am, you and your fellow assessors have stumbled upon a secret U.S. operation to uncover confidential foreign technology. Your government is kindly asking you to stand down in further investigating this flight.” Then another Vatican dude named Victor Lecante (played by Smash‘s Brian d’Arcy James) shows up, and from his weird, secretive nature, David infers that Lecante works for The Entity, aka Vatican Secret Service. Lecante tells David, Kristen and Ben that they — and Capt. Samson and Asha — are going to Rome for more questioning. But first, they have to sign a confidentiality agreement. And in doing so, David notices a RSM Fertility brochure in the man’s satchel. But when he mentions that surely Lacante wanted him to see the pamphlet, the man replies, “I have no idea what you’re talking about.”

But THEN, not long after, all of a sudden Capt. Samson and Asha change their stories and say they were lying. So Lecante packs up and leaves, only pausing long enough to tell David that The Entity isn’t going after RSM Fertility, and that he suggests David drop the matter, as well. When the team follows up with the witnesses, Capt. Samson basically says she reversed her account so that she could get off desk duty. And Asha flat-out tells Ben that the Church promised her entry to Massachusetts Institute of Technology the following year in exchange for her recanting.

‘DON’T BE A PRIEST’ | Throughout all of this, Kristen’s got a lot going on at home. She and Andy have decided to shut down their climbing business, which means that he’ll have to go to Colorado one more time, for a month, to wrap up loose ends. And they meet with Kurt for a session to discuss how Kristen has changed in the time that Andy has been away. As you might have guessed, the frozen french-fry incident — video of which has gone viral — is at the top of the agenda. “I don’t deny that I’ve changed,” Kristen says, attributing the adjustment to her work’s effect on her… but she doesn’t want to change back. “Now when I’ve been wronged, I blame the person who wronged me, and not myself.” She also says that she’s acting in a way that she would want her daughters to act.

Which is funny, because after Sheryl shows the girls the grocery-store incident (and makes a point of mentioning how Andy didn’t do anything to stick up for their mom), Laura gets in trouble at school for calling her teacher a “f–king liar” when the teacher doesn’t believe that Kristen is the woman in the video. Oops! 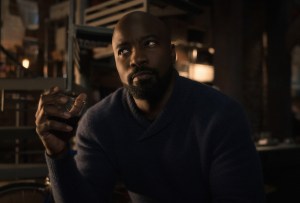 Meanwhile, David is trying to meditate one night when Leland shows up in a tearful panic, reporting that a “winged monster” tried to tear him apart when he wore his rosary to bed one night. David tosses him out but is disturbed by how much Leland’s sketch of his attacker looks like David’s sketch of the archangel Michael from earlier this season. On another occasion, David meditates to Gregorian chants that slowly become distorted, leading him to have disturbing visions of stabbing, maggots, more stabbing… and of himself getting to know Kristen biblically.

Ben later finds a planted piece of tech in David’s laptop, and look at that: It has a pentagram etched into it! Working on the idea that someone (prob Leland) put it there, the pair fake some footage of David in his room that Ben will loop in order to make Ben think they’re not onto him. But as David notes: Maybe Leland has done the same thing?

Anyway, Kristen eventually hangs back in David’s room after a meeting with him and Ben. She explains that she’s skipping a session with Kurt, which leads into a discussion of why she’s so angry all the time. Everyone is awful, she explains, though she loves her daughters, and “I like you. I tolerate Ben.” (Anyone else note how Andy isn’t anywhere in there? OK. Cool.) Then she asks why he’s becoming a priest, and he goes through his semi-wild life up until five years ago — when Julia died — and how “That’s when I found science didn’t really explain life to me.”

Off of her earlier comment, he says, “People do bad. People are bad. They try not to reveal it because Americans are obsessed with purity. They can’t even let on that something is wrong.” The real solution? “Forgiveness,” he says. “People apologizing.” When she goes to leave, he stands and pulls her into a hug. It lasts QUITE A WHILE. And then she cradles his head with one hand and then caresses his cheek, which is TV speak for “We shall be getting down at some point,” is it not? “Don’t be a priest,” she says forlornly, adding that she’ll miss him when it happens. “I’ll still be here,” he says. She leaves.

At home, Kristen crawls into bed and apologizes to Andy, who stirs. “Be patient with me,” she asks as he embraces her.

On another day, David, Ben and Kristen gather to drink and play with the smell-o-meter that the Vatican used with Capt. Samson. And that’s when David decides that he’s going to go after RSM Fertility, even if the Church isn’t. Kristen and Ben say they’re on board, and the trio toasts to their next round of otherworldly troublemaking. 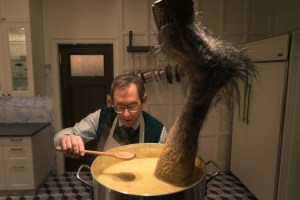 THE TRUE GOAT | Back to Leland: Of course his rosary story is part of his long, infernal con, but in a visit with his goat therapist (disclosure: I squealed with glee when I saw him), the hoofed mental health professional seems to doubt Leland’s devotion to ol’ Beelzebub.) He asks for blood, which Leland tries to get from Sheryl, though she’s too busy making sacrifices to her creepy doll friend to help him out. So Leland goes back and lops off the therapist’s head, then serves him to Sheryl — “I hope you like goat curry” — when she inevitably comes around and winds up at his door. But what are we to make of that look she gives her ex right before the credits roll?