The following contains spoilers from the third episode of Lucifer Season 6.

Three episodes into its farewell run, Netflix’s Lucifer presented its titular devil and former detective Chloe Decker in a way you have never seen before, when revisiting their past led them into a literally animated mindscape.

In “Yabba Dabba Do Me,” as Lucifer grapples with his apparent destiny to be God, Linda nudges him to see if he can care about someone as despicable as, say, the series’ very first caught killer, record producer Jimmy Barnes.

But because Jimmy had since died in a mental institution, Lucifer and Chloe had to visit him in Hell. There, before stepping foot in the groovy live-action 1980s, they spent some time as animated characters — because, we’d later learn, young Jimmy marathoned TV cartoons after being abandoned by his mother. 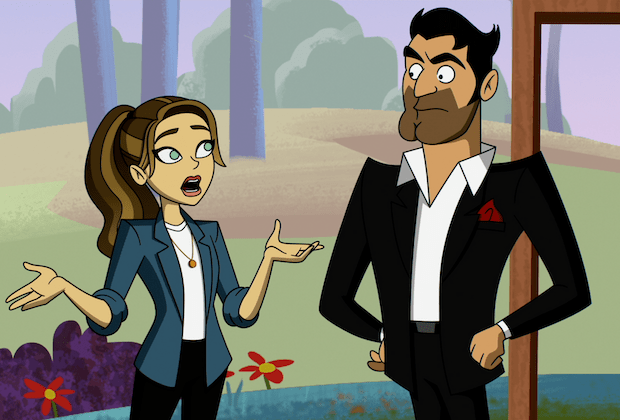 Invited to assess their animated selves in the TVLine video above, Lauren German says that Jennifer Coyle and the team that brings HBO Max’s Harley Quinn to life “did a great job” with Chloe and Lucifer. German and costar Tom Ellis also confirm that they were able to record their dialogue together, in adjacent sound booths, which is not always the case with animated fare.

Ellis then cops to being the butt of a running visual joke, seeing as cartoon Lucifer’s magnificent chin has quite the dimple down the middle.

“I remember having a very long discussion with [co-showrunner] Joe Henderson about how butty my chin could get,” Ellis shares, noting that the plan was to “give [British cartoon icon] Desperate Dan a run for his money!”

German then opens up about how she was coached to be more lively with her voice, as the cartoon version of Chloe.

“I remember them saying to me — in the nicest way — ‘Lauren, can you be a little more animated?'” the actress recalls. “I realized I have a bit of a monotone voice… so I was really! trying! to keep! the energy! in every single sentence! I had to bring a little more on the voice department when I’m animated.”