Warning: The following contains spoilers for Good Trouble‘s Season 3B finale. Proceed at your own risk!

Good Trouble put its characters on trial in Wednesday’s Season 3B finale and sentenced them to cliffhangers.

During a fantasy courtroom scene, Callie was questioned by her former boss Judge Wilson, who pushed her to an emotional epiphany about her insecurities and her future. “I’m leaving?” Callie concluded. But does that mean she’s quitting her job as a defense attorney? Or is she referring to something else? And what about her romantic future, following her and Gael’s breakup so he can focus on being a father? Will sparks reignite between her and Jamie, who is also questioning his career choices?

Elsewhere, Mariana got a job at a rival beauty app after Evan gave her a glowing recommendation. But it turns out she’s actually trying to help the Fight Club girls bring it down, having learned that Jackie stole Bulk Beauty’s idea. Meanwhile, Davia made a choice between Dennis and Matt, but we didn’t find out what it was (argh!); Malika took a job working for a city councilwoman and got a surprise visit from her ex Isaac; and Alice told Sumi they were better off as friends.

Below, showrunner Joanna Johnson tackles all our burning questions about those cliffhangers and much more! (Plus, did you hear the good news? The show is renewed!)

TVLINE | Callie says, “I’m leaving?” There are a lot of ways you can take that, figuratively and literally. So how should viewers interpret Callie’s words?
It’s a [cliffhanger] for a reason. Callie’s been growing a lot. She’s been trying to get out of old patterns and old behavior. There are new things in store, for sure, and it should make everyone a little nervous, because what does she mean?

TVLINE | Having Judge Wilson be the person who brings out this epiphany in her, how did you come to that decision?
I loved the relationship that they had in Season 1, and he just seemed like the right person to challenge her. She was always debating and challenging him, and he just seemed like the perfect person. And I also just love Roger Bart so much and was always looking for a way to bring him back. It just felt like, yeah, he’s the guy that she would imagine really asking her those hard questions. 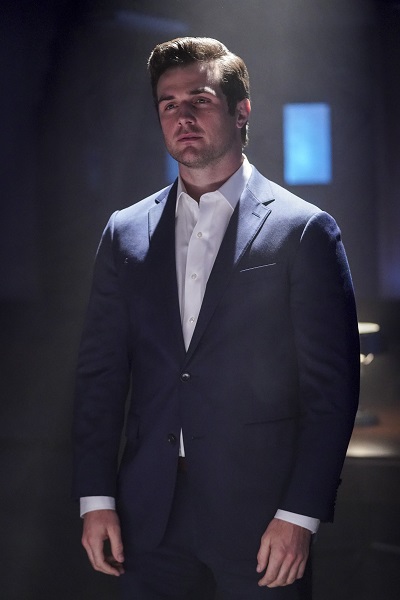 TVLINE | Callie and Jamie have both been questioning their career choices. Is there any chance of them starting over together, professionally?
I mean, there could be. Why not, right? That would be pretty interesting.

TVLINE | As I watching the last episode, I tweeted, “Here’s an idea: Jamie and Callie start their own firm, where they challenge each other, bicker and flirt.”
That’s a great idea. I really like that idea.

TVLINE | Can you talk a little bit about what we might see for Jamie, because it’s interesting to see him questioning his place in terms of the law.
What’s interesting about Jamie and Callie [is] they were very adamant about their positions when it came to the Onway situation in Season 2. He was representing these clients who Callie felt weren’t being honest about what they were going to do with the apartment building they were trying to buy. They were pretty entrenched in their points of view, and I think they’re both learning. Callie’s learning, as Wilson says, it can’t just be her way or the highway, and that she judges people pretty harshly. Her sense of right and wrong is so black and white, and as you grow older, you realize that life really lives in the gray areas. Nothing is a hundred percent good, nothing is a hundred percent bad, and that there are exceptions to every rule. And Jamie is also, on the other hand, learning that the ends don’t always justify the means, and that you don’t have to put your ethics aside to represent your clients. In this prosecution, I also think he feels like Tommy deserves a fair trial. So they both sort of change, meeting a little bit more in the middle.

TVLINE | Is Jamie’s little smile when the verdict’s being read an indication that the verdict went in Callie’s favor? Or is that just a smile of support?
In the premiere of the fourth season, you’re going to find out what that smile meant. But it did mean something, and I’m glad you picked up on it, because it was interesting, like why is he giving her that smile?

TVLINE | Is there a possibility of a romantic reunion between Jamie and Callie now that she and Gael have broken up, and she and Jamie are starting to, as you said, meet each other in the middle?
Anything’s possible. Those two have amazing chemistry, and as hard as Gael and Callie tried a couple of times, something keeps pushing Jamie and Callie back together. And who knew they’d end up at opposite sides of a trial? The universe seems to want the two of them together. So it’s definitely possible. 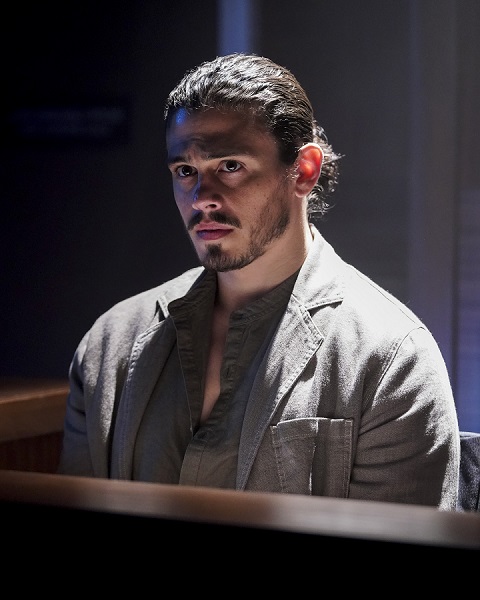 TVLINE | Callie did not really answer Mariana when she asked Callie if she was in love with Gael. So would you say that Callie’s feelings for him are maybe not as deep as her feelings are for Jamie?
Yeah, you could say that. I don’t think that she and Gael ever really got to go as deep and as long as she and Jamie did. Their relationship seems to keep getting nipped in the bud. They’ve never told each other that they love each other. They’ve never had the opportunity to get to that point. I think she does love him, and I think he does love her, but she was living with Jamie. There was more time that she was with Jamie.

TVLINE | With the breakup, and Gael really wanting to be there for Isabella through the pregnancy, does that open the door for something romantic to develop between the two of them?
I thought that their chemistry this season really was starting to grow, and their friendship was nice, and it’s certainly something I could imagine them considering. It would be easier if they were a couple to raise a child. The reason that I was interested in the story of having Isabella get pregnant was this idea of: What happens when somebody you’re not really with, you get [them] pregnant? And they want to have the baby, and so you’re suddenly going to be a father or parent, whether you like it or not, whether you’re ready or not. And how does that affect the pursuit of the dreams you have as a young person, and how does that accelerate your having to mature? And then also how do you raise a child with someone you were never involved with, and that you didn’t even really know that well? I just think that’s super interesting. But co-parenting is so much easier if you’re in a romantic relationship. 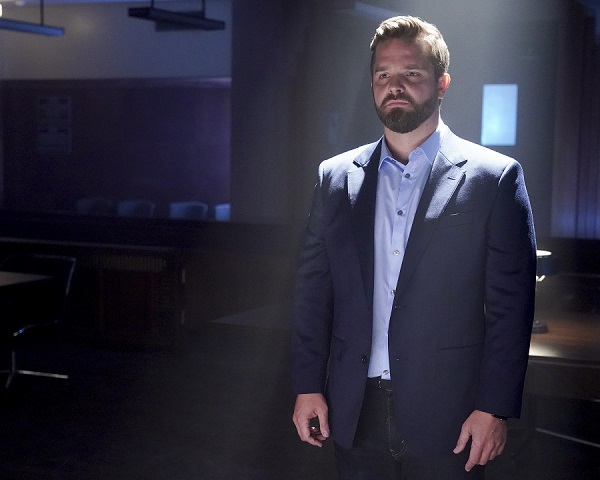 TVLINE | There was an interesting scene between Evan and Jackie, where he was texting Mariana. What are his intentions towards Mariana? What’s going on there?
That’s the question, right? Is he in cahoots with Jackie in some way? How does he feel about Mariana after she dumped him? Is he complicit in some way? Is he going to do Jackie’s bidding? We don’t know. Evan’s been such a wonderful part of the show, and I think a lot of the fans are invested in him and Mariana. They’ve had a hard time, because she’s had to choose her friends, really, over him, but I don’t know if they’re totally done.

TVLINE | It’s revealed that Mariana is like a double agent now. That in some ways is a mix of her moving forward and going back to old habits.
A hundred percent. It’s classic Mariana, but she’s doing it for New Mariana reasons. And I think that she’s going to struggle with that a little bit, like, “Is this me moving forward? Or is this me going backwards?”

TVLINE | Isaac popped up at the most inopportune of moments. Is there anything you can hint about what’s brought him back?
He’s probably not showing up there at night without advance warning to say, “Hey, I left my apartment key here.” He probably has something fairly urgent to tell her. I think it’s fair to feel like it’s something romantic. And I really understand that people are upset with Malika a little bit. She wanted to explore her sexuality, and she didn’t want to break up with him. But it was a lot to ask him to open up their relationship, basically. So I really understand why he was hurt and blindsided. But then she was like, “You’re my priority. I want to be with you, so let’s just do that.” And then he’s like, “I’m leaving the country.” I get that he was hurt, but I also think that he kind of abandoned her. It was kind of harsh. So I understand why she moved on. But now he’s back, and so it’s like, what about the relationships that she has with Dyonte and Angelica? It provides a really great conundrum for her to figure out: “What do I do? Do I go back? Or do I move forward?” 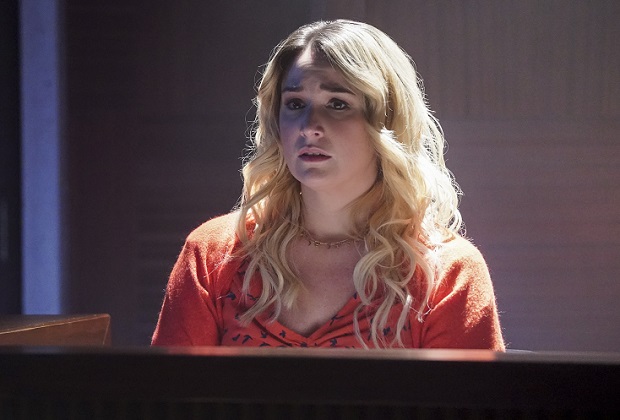 TVLINE | We still don’t know what Davia’s choice is. Is the fact that she was looking at Dennis that way during the improv show an indication of who she’s going to pick?
To be honest with you, we actually shot her choice. We know. But once in the editing, in looking for [cliffhangers] for everybody’s story — and even though it was a 90-minute finale, we still were long — we decided that we would hold that. I did feel a little bit like I’m cheating the audience because they’ve been waiting. But on the other hand, what’s another few months to wait? And they have time to think about, well, the way she was looking at him, you can read into that. They have a special chemistry, and they’ve been through a lot. I’m interested in knowing what Davia really feels. And Matt’s adorable, and I love him, and I love the actor that plays him. He’s a really good guy, and she doesn’t have baggage with him.

TVLINE | Both Dennis and Matt are really good people at their core. So how torn were you guys in the writers’ room about her choice? Or was there a clear winner?
Very torn. You have your Matt ‘shippers, and you have your Dennis ‘shippers, and everybody has a different opinion. But the great thing is we have time to play with all of it. But it’s just a question of the kind of guy that Davia really feels like she’s connected to and really feels like she needs.

TVLINE | Alice decided that she and Sumi are better off as friends, but does she really feel that way?
I think she’s protecting her heart. Sumi has grown a lot and changed, but Sumi was pretty brutal. Their past was hard. It was really hard for Alice, and Alice has worked so hard to stand up for herself and have her voice be heard. It’s like, “Am I stepping backwards if I go with Sumi? Has she changed? Have I changed? Am I going to fall back into old patterns?” She had such a victory, getting through that diversity program, and all of them taking ownership of their own work and not playing the game. She just doesn’t want to go backward.

Good Trouble fans, what did you think of the season ender? Grade it below, then hit the comments!