Michael K. Williams of The Wire fame was found dead in his Brooklyn apartment on Monday. He was 54.

“It is with deep sorrow that the family announces the passing of Emmy nominated actor Michael Kenneth Williams,” a rep for the actor’s family told THR. “They ask for your privacy while grieving this insurmountable loss.”

Drug paraphernalia was reportedly found Williams’ apartment, according to the New York Post and Daily News. Williams since the age of 19 had battled addiction.

“People didn’t even call me Mike, they called me Omar,” he once said of the conflation of him and Wire stickup man Omar Little, who oft is regarded as one of TV’s greatest characters ever. “That mixed with my identity crisis and my addiction — and it was not a good mix. I had to stop trying to be Omar and just be Mike.”

In addition to his five-season run on The Wire, Williams’ many TV credits included Boardwalk Empire (as racketeer Chalky White), Community, The Spoils Before Dying, The Night Of, When We Rise, Hap and Leonard, When They See Us and voice work on F Is for Family. 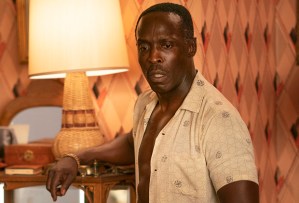 Williams is currently Emmy-nominated for Outstanding Supporting Actor in a Drama Series, for his role as Lovecraft Country‘s Montrose Freeman. He previously earned Emmy nods for his acting in When They See Us, The Night Of and the 2015 TV-movie Bessie.

“We are devastated to learn of the passing of Michael Kenneth Williams, a member of the HBO family for more than 20 years,” reads a statement from the cabler. “While the world is aware of his immense talents as an artist, we knew Michael as a dear friend who was beloved by all who had the privilege to work with him. We send our deepest condolences to his family for this immeasurable loss.”

Isiah Whitlock Jr, who played The Wire‘s state senator Clay Davis, remembered Williams as “One of the nicest brothers on the planet with the biggest heart. An amazing actor and soul.”

“Mr. Williams was such a good, kind, wonderful man,” Community alum Joel McHale tweeted. “He was so funny on Community and, of course, an actor for the ages.”

“I have never met a more loving, caring, beautiful human being. A true friend and thespian,” said Giancarlo Esposito, who worked with Williams twice over the years. “I will forever miss you my dear brother. Godspeed.”