The CW’s programming certainly hasn’t lacked variety over the years: The next quartet duking it out in our bracket tourney hails from West Covina, California, the Big Apple, Starling City… and the literal end of the world.

In honor of The CW’s 15-year anniversary on Sept. 18, TVLine’s tournament to crown the network’s Best Show Ever continues with more battles in the round of 32. Next up: Arrow faces off against Ringer, while The 100 is matched up against Crazy Ex-Girlfriend. 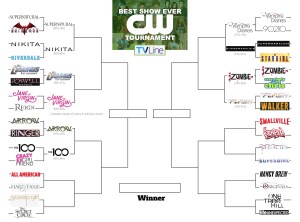 UPDATE: The below polls are officially closed, with Arrow and The 100 moving on to the Sweet 16. Click here to vote in our next two match-ups, featuring All American vs. Hart of Dixie and Gossip Girl vs. The Secret Circle.

(VOTE FOR ARROW VS. RINGER)