Warning: The following contains spoilers for Sunday’s The Walking Dead. If you’d rather watch first, read later, make like Maggie in a room with Negan in it and leave.

In the fast-paced and stylishly shot opening moments of Sunday’s episode of The Walking Dead, we got a glimpse of just how brutal the masked Reapers’ attack teased in “Acheron, Part II” turned out to be. Cole got his throat slit, Duncan went down for what would wind up being the count, Gabriel and Negan were hit, and after coming to Maggie’s rescue, Elijah was never seen again. And before the hour was through, a character we’d known since Season 8 was looking like he didn’t have a prayer of surviving. Who was left knocking on heaven’s door? Read on…

‘SO WE’RE JUST GONA GO TOWARD THE SCREAMING? COOL’ | After that slick intro (which had especially cool, spine-tingling music behind it, no?), we followed Maggie as she was stalked by the Reapers, who as far as I can tell must have been part of a knife-throwing act in a former life. Ultimately arriving in a studio full of mannequins, she’d no sooner found Alden than they’d been attacked anew. While he fought his assailant, she smashed a broken bottle into the side of the head of hers and, with an assist from Negan, appearing out of nowhere, got free in time to hurl a knife at the Reaper who was wailing on her pal. In response, said Reaper detonated a grenade. When the smoke cleared, Maggie discovered that Alden was badly injured. But her plan remained unchanged: Keep going, get the grub, wait for the others. “I know theatrics,” Negan told her. “Those people just told us how insane they are.” But since he had no better idea to offer up, they forged forward with Maggie’s plan. 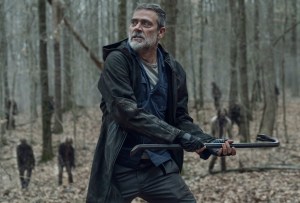 In no time, the unlikely trio heard screams — it was Agatha being attacked by walkers. Once they’d saved her — for the moment, anyway — she ushered them to a critically injured Duncan, who didn’t want to hear Maggie’s apology for the way that things had turned out. “We were good. We were lucky,” he noted. “For a little while,” anyway, she replied. Following the big guy’s demise, Negan tried to get Maggie to listen to him, but that was about as likely to happen as the camera spotting a bad angle on her. Even Alden was beginning to think that maybe Negan might have some strategic value, though. After all, Alden told Maggie, “This can’t be what you told Hershel he’d see.” Eh, she retorted, “not much surprises me anymore.” Soon, Negan happened upon a walker tied to a tree and burned to a crisp; “Judas” the grisly tableau was labeled. And suddenly, the walkers trailing them picked up speed, enough for one to sink its teeth into Agatha, too late to rethink her choice of bacon-scented perfume. Maggie attempted to leap into action to save her friend, but knowing it was beyond too late, Negan pulled her away, leaving the walkers to their meal. 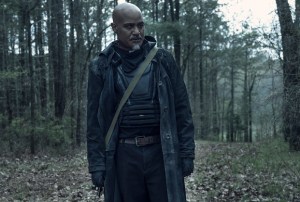 ‘I’M DEAD WEIGHT, AND WE ALL KNOW IT’ | When the traveling companions took shelter in an abandoned church, Alden beseeched Maggie to cut him loose. “You left Gage,” he reminded her. “Leave me.” In his dilapidated state, he was just slowing them down, and the mission was more important than him or any one of them. Pissed at having to make the impossible choice, Maggie blamed Negan for them even being in the horrific situation; if the Saviors hadn’t destroyed everything that they’d built… ! “You still have to decide,” he replied coolly. In the end, Maggie left Alden behind barricaded in the church. “You better be here when we come back,” she told him. “You better come back,” he retorted. And suddenly, she was alone in the middle of nowhere with the man who murdered Glenn before her eyes. Elsewhere, Gabriel worked up the courage to pull a blade out of his leg and take off in pursuit of an injured Reaper. When the preacher found the dying villain, he asked Gabriel to pray for him. “I thought you were a man of God,” the man said when Gabriel hesitated. “God,” Gabriel answered before finishing him off, “isn’t here anymore.” 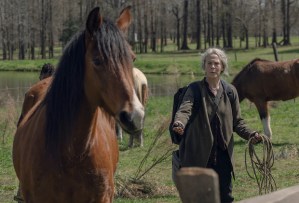 Back in Alexandria, Aaron tsk-tsked Carol for bailing on helping to fortify the walls. But she had bigger fish to fry — namely, trying to find and bring back the horses. Without them, they’d soon all be too weak to scavenge for food anywhere new. In the field, she, Rosita, Kelly and Magna tried and tried to rope the horses. And also failed and failed. While pursuing them yet again, Rosita told Carol that she kept having dreams in which Abraham was trying to tell her something. “It used to freak me out,” she added. “Now I think it’s a message for Alexandria.” If only he didn’t keep getting shot in the head before he could spit it out. As the day wore on, Carol was finally convinced to pack it in and go back. So of course that was when the foursome spotted the horses running to a dairy farm — a “dope” sight in sweet Kelly’s estimation — where they could be penned in. Ironically, the heroines didn’t need their ropes; on Kelly’s suggestion, they realized that the horses wanted to go home as much as their riders wanted them home. 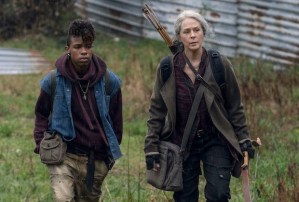 ‘IT’S NOT THAT BAD, NOT LIKE THE SPIDERS’ | As the quartet walked the horses through the streets of Alexandria, you could all but feel spirits rising. Alone with Carol, though, Magna, as gently as she could, asked the older woman to stop giving Kelly false hope that Connie was still alive. Magna was sorry for the guilt with which Carol was grappling, but she was only making it harder for Connie’s sister to grieve and move on. Off that interaction, Carol forlornly slit a horse’s throat so that Alexandria could eat that day. The kids balked at the menu, but Hershel wasn’t fazed. “On the road with my mom, you eat what you find,” he said. And as the episode drew to a close, though Magna and Kelly reaffirmed their bond, Connie’s sister still took off with Carol. So, what did you think of “Hunted”? Wouldn’t it have made more sense to kill off Cole, Duncan and Agatha after we’d gotten to know them, like, at all? And what’s your hunch regarding Alden — will we ever see him again? Alive, that is!