The little engine that could has got nothin’ on Sarah Steele. Considering how seminal a season The Good Fight‘s just-concluded fifth was for both her and Marissa Gold, the no-BS B character she slowly but surely elevated to the A team, her motto oughta be not “I think I can” but “Of course I will.”

The actress’ long, unorthodox journey playing the filterless daughter of Alan Cumming’s Eli Gold began in 2011 via a guest stint in Season 2 of The Good Wife. She recurred for the series’ remaining five seasons before taking her fan-favorite character to offshoot The Good Fight as a full-fledged series regular. After doing scene-stealing supporting work for four years, during which the drama weathered a number of high-profile cast departures, Steele climbed to No. 3 on the call sheet (after leads Christine Baranski and Audra McDonald) and was handed her meatiest storyline to date, as Marissa transitioned from private eye to legal eagle under the tutelage of Emmy winner Mandy Patinkin’s Judge Wackner. Talk about one’s patience paying off.

“In the [10 years] she’s been playing Marissa, Sarah has never given a single performance that was off — and it’s hard to think of another actor that you can say that about,” raves Good Fight co-creator Michelle King. “Her instincts are perfect.”

Below, Steele reflects on her and Marissa’s ascension, getting screamed at by Patinkin, navigating her first-ever sex scene and still getting starstruck by Ms. Baranski.

TVLINE | How did you find out that Marissa was going to become a lawyer?
SARAH STEELE | I actually found out in my costume fitting. I literally tried on a blazer and I was like, “Oh my God, this is the nicest thing I’ve ever had on me in my entire life.” And I looked at the price tag and was like, “Damn.” It was much more expensive than anything I had worn on the show before. And our costume designer went, “Oh, your [wardrobe] budget went up because you’re becoming a lawyer this season.” And I was like, “What?!”

TVLINE | What else did you feel aside from surprise? Excitement? Fear?
I was really excited. It’s funny because I knew this season I was No. 3 [on the call sheet]. When the show started I was No. 6. So I had an inkling that my role would be expanded, but I didn’t know how they would do that.

TVLINE | What are some of the other perks about getting promoted from private eye to lawyer?
[Laughs] Honestly, it’s just being there more. I love the job and I love the people and I love the work.

TVLINE | You and Christine are the last two original series regulars standing. What’s the key to your longevity?
I think it’s kind of a mutual [lovefest]. I really want to be there — and they want me there, I think. This is my first time being a series regular. I’m here until the end.

TVLINE | Did you have as much fun working with Mandy as it appeared?
We had a blast. It was a really different way of being on the show for me because Mandy is so playful, and I have mostly worked with people who are more precise and who never stray from what is written. Christine never goes off script. She nails what is written. As does Audra. And Mandy is much more of… loose cannon has a negative spin and there’s nothing negative about this, but he does his own thing. And I had to really rise as an actor to meet that and match it. That was really fun for me.

TVLINE | In Episode 7, Wackner went off on Marissa. What was it like being on the receiving end of a Mandy Patinkin F-bomb tirade?
[Laughs] One time we shot Marissa storming out [of the courtroom] and when I was completely off camera and [out of the soundstage] I screamed, “F–k off.‘ Whatever [Mandy] and I built together did actually incite in me true feelings of rage. [Laughs] 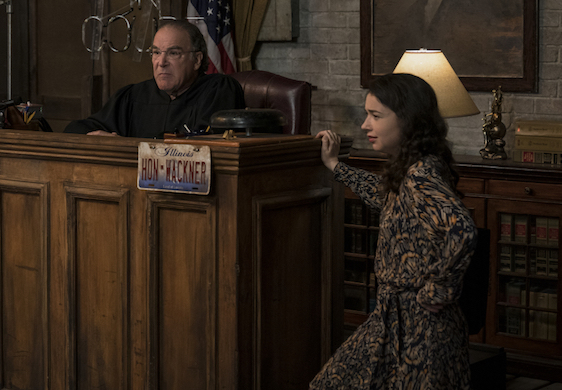 TVLINE | How would you describe Marissa and Wackner’s relationship?
I think she is inspired by him — in much the same way as I was inspired by Mandy. Marissa has had all of these incredible mentors, like [Baranski’s] Diane. But Eli Gold is her father. That man is a wild personality. So I think there’s a certain way in which these wild male personalities feel familiar to Marissa; she knows how to deal with him. And it’s more fun for her than being at the law firm. She’s on a path to becoming a real lawyer and then gets sidetracked by [Wackner’s] exciting [kangaroo court]. And she’s seduced by the excitement.

TVLINE | You mentioned this being your first series-regular gig. Do you ever have moments when you look around the set and go, “Holy s–t, I’m working with Christine Baranski. And Audra McDonald. And Mandy Patinkin. And Michael Sheen…
It’s insane. At the beginning of this season, after being cooped up in my house for so long because of COVID, I went in to do a camera test and Christine was already filming. She walked past me and I got completely starstruck. I’ve been working with her for [10] years now and I’m like, “That’s Christine Baranski.” I told her that and she was like, “That’s very hilarious. And just a little pathetic.”

TVLINE | Correct me if I’m wrong, but I think you had your first Good Fight sex scene this season…
That was the first sex scene that I had ever done. I was so glad we had an intimacy coordinator. I was doing it with Andrew Burnap, whose this amazing actor from The Inheritance. It was his first sex scene also. So we had this immediate comfort because we were both nervous. And I got to learn all of these new things, like having a barrier. You have these weird chicken cutlet gel barriers in between your crotches. I was so floored that every time I’m seeing, like, super sexy scenes on film [there are probably] these weird flesh-colored, chicken cutlet-looking barriers everywhere. It’s really an incredible [challenge] to make it seem sexy. I had never experienced that first hand.

TVLINE | It was fun to see the sexy, flirty side of Marissa.
So fun. I hope they give me more stuff like that. Of course I love playing Marissa killing it at the job, but I’d love to know more about her personal life.