There’s going to be a new Power of Three in front of the camera and behind the scenes when Charmed returns for its fourth season in 2022.

Liz Kruger and Craig Shapiro, who have helmed the CW reboot for the past two seasons, are handing over the reins to a new trio of showrunners: Jeffrey Lieber, Joey Falco and Nicki Renna, TVLine has learned exclusively.

“We have treasured our time on Charmed during the last two seasons and look forward to continuing on as executive producers while we pursue our development with CBS Studios,” Kruger and Shapiro tell TVLine in a statement. “We are excited for the fans to see what the new team of Nicki, Joey and Jeffrey have in store for Season 4 and are confident that the show is in excellent hands!”

“We feel super blessed to be taking the helm at this moment when things are starting over,” Lieber says. “We’re bringing in a totally new character who we can do anything with, and it’s just exciting. We hope to make a season where it’s like, ‘Buckle up and strap in, because anything’s possible.'”

Adds Falco, “I’ve been on this show since Day 1, and I’ve had three years now to see different showrunners put different spins on the series. [Renna and I] have had a lot of time to think about things we want to see more of on the show. We both have weird, quirky senses of humor and sensibilities. We’re looking forward to taking that and putting it front and center.”

“We’ve all been here in the trenches, shaping this show and loving it,” Renna says. “It’s been like raising a child together. We’re excited to step into more of a leadership position and take the show to places we’ve been wanting to, with storylines and emotional arcs that really excite us. We’re three very different people in terms of our personalities, backgrounds and interests, but we work really well together.”

Read on for more of the new showrunners’ thoughts about Season 4, including some very early intel about the newest Charmed One replacing the late, great Macy Vaugh (played by Madeleine Mantock): 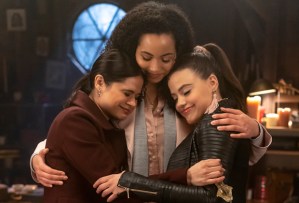 THE VIBE | “We’re definitely not just going to blow past Macy’s death,” Falco assures us. “This season is going to be about grief and trauma, and how that can change people — but also how you can either succumb to it or push past it, and how you can find joy and happiness again. As the characters get there, we really think it’s going to help us make what we think is the most fun, sexy, exciting season of Charmed yet.”

THE NEW GIRL | “We’re so excited about this character,” Renna says . “It’s an opportunity to bring in an incredibly fun, irreverent, unpredictable personality. She’s edgy and smart and has a wicked sense of humor, but we also like that she’s not perfect. She’s flawed. She has insecurities and fears like we all do. We’re just having a lot of fun, and we’re excited to explore how that will affect the dynamic between Mel and Maggie, as well as Harry and Jordan.”

But for those fans wondering just how many secret children Marisol had, Lieber also notes, “We have taken into account that we don’t want to rely on Marisol’s secrets to provide the new character. So this will be a different experience than anything that’s happened on this show or the previous one. We’re going to rethink the entire dynamic.”

THE BOYS | “Harry has just lost the love of his life,” Falco says, explaining that losing Macy will “probably be harder for him than anyone. But we’re excited about this, because it presents the opportunity to take Harry to places that we’ve never seen him go before. He’s going to go on an interesting, dark journey this season.”

And here comes Lieber with one last curveball: “One should not assume that Jordan is a Whitelighter, or that Harry is not a Whitelighter anymore, or that anyone is what they were before. You go through a tragedy and you start to redefine yourself. We have this moment in time where everyone gets to rethink who they are and how they interact with the world. Though you saw something at the end of Season 3, I don’t know if you can assume that it will turn out exactly as one would expect in Season 4.”

What are your hopes for Charmed’s fourth season? Drop ’em in a comment below.