Warning: The following contains spoilers for Sunday’s Season 11 premiere of The Walking Dead. If you’d rather watch first, read later, please exit in an orderly fashion.

As it began its 11th and final season Sunday, The Walking Dead took pains to ensure that even the most jaded, seen-it-all viewer got an eyeful of something new — and I don’t just mean potential zombie straphangers, either. No, in “Acheron, Part I,” we got a gander at walkers doing something they never had before (not to my recollection, anyway… not en masse). The episode also returned a Big Bad to villainous form, revealed the nightmarish bureaucracy that is the Commonwealth, hinted at the fate of a long-gone character and left in jeopardy not only Maggie but my (our?) favorite character. Read on, and we’ll go over all the details.

‘WE NEED FOOD — LOTS OF IT — NOW’ | As the hour got underway, Daryl, Carol, Maggie and a whole mess of our regulars stole into Fort Connors to retrieve MREs for an overcrowded and underfed Alexandria. There, they found all of the enlisted walkers… napping. Literally conked out, making ZZZs. And I guess we’ve seen zombies go still before, but these guys were as out as me about halfway through any given episode of Fear the Walking Dead. Anyway, once the gang had, ahem, awakened the dead, grabbed as many snacks as they could and returned to Alexandria, Daryl warmly hugged Dog, Judith and RJ, and Maggie exchanged glares with Negan before being told by Hershel that Cole had a surprise for her: a few lost members of their old group, Duncan, Agatha and Frost. Nearby, fights were beginning to break out over grub — and there were more to come. The cupboard would be bare in a week, Gabriel warned the principals. Luckily, Maggie knew someplace new where they could score some vittles: her old group’s HQ, Meridien. Sure, it was currently infested with the Reapers, who’d slaughtered most of her pals, but it was well-stocked. “We just need to take it back,” she said. In the end, Daryl, Gabriel, Alden, Negan, Dog, Gage (remember him… at all?) and C. Thomas Howell (whose Hilltopper is apparently named Roy) joined Maggie and her old crew on what Rosita called “a suicide mission.” 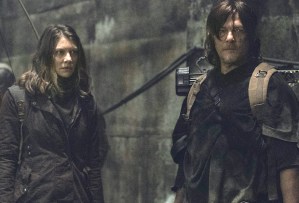 As night fell on the group, so did a whole lotta rain. So they moved underground, continuing to make tracks via the subway tunnels beneath DC. Over and over, Negan waved red flags that something was amiss down below, but the gang was less keen on listening than in casting him as Chris in a one-man production of Everybody Hates Chris. “It ain’t working,” huffed Daryl, “you trying to run s—t.” By and by, the group came upon a mass grave — a squirmy, reanimated mass grave gift-wrapped in plastic. Hey, “why didn’t [that walker] make any noise?” asked C. Thomas Howell. Sorry, I mean Roy; that’s gonna take some getting used to. The walkers’ throats had all been slashed so deeply, their heads were nearly severed. “I’m gonna need a new pair of underwear,” said Gage’s expression. Not to worry, insisted Maggie. The Reapers hadn’t done this, these walkers had been killed in the fall. As such, she wanted the path cleared so that they could continue — a task which damn near got Gage bitten. After saving the boy, Negan accused Maggie of playing dictator and brushing aside the fact that whoever had slit the walkers’ throats really might still be down there. “So this is a death march,” he concluded, “and you are the goddamn Pied Piper.” With that, he declared himself out, Gage and Roy both deciding to bail, too. 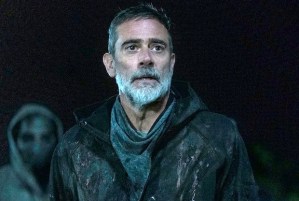 ‘HE’S A D—K, BUT HE MAKES SENSE’ | When Maggie protested that they needed Negan because he knew DC, he couldn’t contain his laugh. “Nobody here knows how to read a goddamn map?” Nah, he knew what this was really about. She wanted him along so that he could get killed — or she could kill him — away from the Judgey McJudgersons of Alexandria. He’d thought Daryl was in on it, but “I can tell from that glazed look” that that’s not the case. Gabriel accused Negan of being paranoid. “But I’m right,” he shot back. So why didn’t Maggie just get it over with? Negan didn’t want to be dragged through the slime to be put down like a dog like Glenn had been. With that, Daryl slugged him, and Maggie, her rage barely in check, admitted that yeah, killing him was always on her mind. But just enough of the old her remained for her to leave him breathing. For now. “So keep pushing me, Negan. Please.” Down the tracks a ways, the group discovered a subway car and cave-in blocking their path. Oh, and Gage and Roy had snuck away with all their supplies — d’oh! And fresh walkers were now strolling through the mass grave! Dog — no, boy, come back! — skedaddled through a hole beneath the cave-in, Daryl giving chase. The rest of the gang fought the walkers, then climbed atop the subway car. Last one up Maggie found herself being grabbed at by walkers whose grip was stronger than hers. “Negan!” she cried. But, his eyes chillier than Frost’s name, he just turned away and left her to fall! 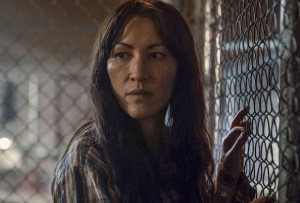 Meanwhile, in the Commonwealth, as Mercer (Michael James Shaw) observed, Eugene, Ezekiel, Yumiko and Princess were put through Level I assessment, which consisted of an endless battery of questions about everything from their old zip codes to the number of bowel movements they took in a day. (Not making that up.) After hours of this, Ezekiel snapped, asking a silent Mercer if he was the guy in charge (he was) and guessing that he’d previously been an “a—hole beat cop,” which was why “all they had to do was give you a pumpkin-colored space suit, and you’re back to power-tripping with your head up your own ass.” Ezekiel might have dug himself in even more deeply had he not been overtaken by a coughing fit, the result of his, um, harmless goiter. Afterwards, Eugene urged his pals to have faith in Stephanie, who’d warned that her peeps were exceedingly cautious. But after they saw a fellow prisoner being hauled off for “reprocessing,” even Eugene was like, “OK, gotta go.” Thanks to Princess’ eavesdropping, they knew just how to swipe a couple of stormtrooper uniforms. However, with the exit in sight, they passed what Ezekiel called the Wall of the Lost — a bulletin board full of pictures of folks to be flagged “for expedited assessment and admittance.” Among them was a flyer searching for a guy named Heath — possibly Corey Hawkins’ character (not seen since Season 7)? Our protagonists didn’t notice that so much as a note from Yumiko’s brother, Tomi. If he was there, she… Well, she had to stay. Plot twist.

So, what did you think of the Season 11 premiere? Grade it in the poll below, then click here to see what Jeffrey Dean Morgan has to say about Negan’s deadly decision.