Although in Sunday’s episode of The Walking Dead, Tara found herself in a community made up entirely of women, it was hardly Paradise Island. Read on, and we’ll not only go over the village’s tragic origins but also reveal the fate of our heroine and her traveling companion, Heath.

‘NOBODY’S IN THIS TOGETHER, NOT ANYMORE’ | Early on in “Swear,” we learned that Alexandria’s scavengers weren’t faring too well on their hunting mission. It wasn’t bothering Tara, who cheerfully suggested that “there’s nothing left in this world that isn’t hidden, we just have to find it.” However, it — and, more so, Alexandria’s murderous assault on the Saviors — was weighing heavily on Heath. He couldn’t believe what they’d all done, in essence, “for some milk and some corn.” Anyway, they’d been on the road for two weeks, as scheduled, and had gone farther than they were supposed to. So, even if all they had to show for their efforts were some rusty cans of okra, tomorrow they were heading back, he said. 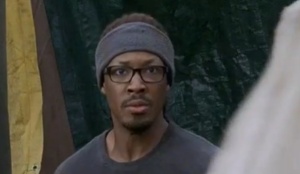 Later that day, the duo discovered a settlement — or, rather, the remains of one — on a bridge, and Tara accidentally released a bunch of walkers that had been buried in dry cement. (Hate when that happens!) One thing led to another, and, after being cut off from Heath, Tara wound up falling from the bridge into the water and, by and by, washing ashore on a beach. Unconscious, she was discovered by a teenager named Cindy, whose younger companion, Rachel — bringing Lizzie very much to mind — was eager to kill the catch of the day in spite of the fact that she wasn’t “a bobber.”

‘LOOK, I’M COOL’ | After getting Rachel to promise not to snitch, Cindy dragged Tara away from the surf and left her some water, a spear and a salted-perch snack. (Yum?) Then, as the girl snuck back to her village, Tara surreptitiously followed and discovered that, weirdly, there didn’t seem to be a single man in Oceanside. Mind you, she didn’t have long to contemplate the matter — in no time, she was being shot at and chased. (Typical post-apocalyptic welcome-wagon protocol.) When Tara got the drop on one of her pursuers, the woman, Beatrice, told her to “go ahead” and shoot. But, of course, Tara just knocked her out… at which point she found herself cornered by a pistol-packing Rachel and subsequently surrounded. “Hi,” she said — in that adorably Tara way of hers — as the group all pointed their weapons at her.

Before Rachel could pop Tara, a seemingly pretty kindly middle-aged woman named Natanya intervened, spiriting the trespasser away for a Q&A session with Beatrice and another woman, Kathy. (And you’d have sworn Bea and Kathy were in a competition to see which of them could come off more hostile.) Tara lied that she and a companion had been traveling around scavenging for the last coupla years, and that previously, she’d worked on a fishing boat — a larder. (Ha.) After falling off the bridge, she’d snuck into the community behind Cindy — Natanya’s granddaughter, it turned out — to see if it was safe. (At least that much was true.) Unfortunately, now Tara had the women at a disadvantage: Ordinarily, they shot strangers on sight, and she knew a lot about their village. What should they do with her? “That’s a pickle, alright,” Tara agreed. 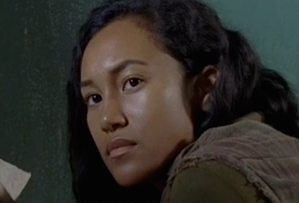 ‘WHERE ARE ALL THE MEN?’ | Over dinner with Natanya, Beatrice, Kathy and Cindy, Tara thanked the teenager for saving her life and at last asked the $64,000 question: Why aren’t there any guys around? There was a skirmish with another group, Natanya explained. None of the men survived. Neither did Cindy’s mother or 11-year-old brother. Now that they were all bonding, Natanya gave Tara another chance to come clean (since she knew what Tara didn’t — that a larder isn’t a boat but a room for storing meat). Finally, Tara admitted that she came from a lovely community that also had been threatened by another group, a gang whose base was at a satellite tower. (Cue a knowing look from Bea.) Why doesn’t Oceanside work with Alexandria, Tara suggested, and become stronger together? Natanya wasn’t 100 percent sold but OK’d Beatrice and Kathy — not Cindy, to her chagrin — to return with Tara to Alexandria and check it out.

The next day, the first chance Beatrice and Kathy got, they attacked Tara. WTF?!? Tara’s people hadn’t killed all of the Saviors, Bea explained. The satellite tower was just an outpost, one of many. After Oceanside’s disastrous initial conflict with the Saviors, the survivors had fled rather than go on working for Negan. So no way in hell could the women risk letting Tara lead the Saviors to their hideaway. Luckily, before Beatrice could shoot Tara, Cindy, who’d secretly followed, intervened. She was going to let Tara go so long as she would “swear that [she’d] never come back or tell anyone about us.” Tara’s perfect response after being marked for murder over and over: “Why would I come back?!?” Cindy actually had an answer to that — because now, people did what they thought they had to. For instance, Tara’s people hadn’t had to kill those Saviors. “You just did,” Cindy said. “Nobody’s evil. They just decide to forget who they are.”

‘I HOPE THAT WAS YOU’ | Once Tara promised to keep Oceanside a secret, Cindy helped cover her so that she could make it safely through the maze of walkers to the other side of the bridge. (Not for nothin’, but the kid could teach Michonne a thing or two about sharpshooting.) For an awful moment, Tara thought that she was looking at Heath, turned. But no, thankfully, it was just a female walker with the same hairdo as him. (OK, TWD, you’ve probably pulled that kinda fake-out on us enough at this point.) Tara did, however, find her pal’s broken glasses, a tag marked PPP… and tire tracks leading away. “Maybe that was you,” she said hopefully.

Making her way back to Alexandria, Tara discovered that among the supplies Cindy had packed for her was a friendship bracelet. (Aw — that had to make the salted perch taste better.) When at last Tara made it to the gates of Alexandria, Eugene’s stricken face told her all that she needed and didn’t want to know — not only would Denise never get to say “I love you” back to her, but Glenn and Abraham were gone, too. For her part, Rosita encouraged Tara to imagine ways of fighting back and making it all right. But still, Tara kept her vow to Cindy and didn’t reveal that she knew of a place that had both guns and ammo. Tara, at least, decided not to forget who she is.

So, what did you think of “Swear” and the new community to which it introduced us? Hit the comments.