Super producer Tyler Perry was all smiles as he met with the leading ladies of his soapy hit BET drama Sistas for an aftershow following its Season 3 midseason finale on Wednesday. But those grins came to an end when Perry started reading mean tweets about the series’ perceived need for a writers’ room on the special, titled The Tyler Perry Show: Sistas After-Show Edition.

“Out of all the things happening in the world, you’re worried about a character on this show saying he liked getting his prostate tickled?” Perry asked incredulously. “OK, listen. To all of you who think I need a writers’ room, let me just say this: We do have writers’ rooms on some of my other shows, and there will be other writers’ rooms to come.” 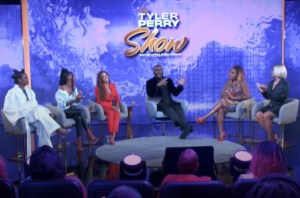 But Perry said he’s not fixing Sistas — which continues its reign as the No. 1 scripted series on cable for African Americans 18-49 — because it is not broken.

“In the past, I had writers’ rooms, and the ratings tanked,” he added. “People know my voice. They know how I write. And have you ever thought for a minute, just one second, that I’m specific in what I’m doing? That I am telling the stories that the audience wants to see? Don’t worry about it. I got this. That’s why the show is No. 1.”

Upon hearing this, the audience and the stars of Sistas applauded wildly. 75 percent of the audience also weighed in and said Andi should leave Gary and get with Robin. Alas, everyone will have to wait and see what Andi does next because Season 3B, as Perry announced, won’t be back until October.

What do you think of Tyler Perry’s defense of not having a writers’ room for his hit show Sistas? Drop your thoughts in the comments.