The Season 3 midseason finale for Tyler Perry’s Sistas still has us cheering.

In case you need a refresher, Andi walked in on Gary, his therapist and an unknown “model” straddling him as if performing a sex act — and she shut that mess down with the quickness on Wednesday’s thrilling installment. After listening to (while menacingly pointing at and threatening) Angela the nutty psychologist and Gary explain that Jacqueline was a model who was “helping” Gary overcome his insecurities about Andi’s past hookup with Paris, Andi called it the bulls–t that it was.

Smarter and more decisive than she has been in the past on the beloved BET drama, a sarcastic Andi asked if she could have a male model perform “therapy” on her, too, before telling Gary that their sham of an engagement was officially over. Let the church say, “Amen!”

Gary asked Andi if she was sure, and she said she was and that she was leaving to get away from him. Andi also said that by the time she returned, she wanted Gary and Angela out of her home, or she was going to call the cops on them. 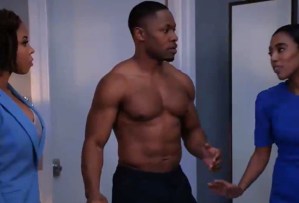 Mr. Unfaithful unlocked Andi’s engagement ring (ugh!), per her demands, and told her to go see Robin. But Andi had the last laugh. She thanked Gary for the suggestion and said she would go see the attractive lawyer who has been pursuing and flirting with her for days.

Last but not least, Andi asked Dr. Angela: If her form of sexual healing was legit and effective, why hadn’t she called and given her a heads-up so she wouldn’t walk in and discover the act in horror the way she had? Gary said he asked Angela not to call because it was embarrassing, and Andi said, “You’re embarrassing. Get the f–k out of my house.” Now, that’s what we call a clapback.

Andi headed to Karen’s salon after getting away from Gary and told her everything that happened. But Karen didn’t gloat about being right. Instead, she poured her bestie a glass of wine and listened like a good friend should. Andi didn’t go home to talk things out with Gary, as she’d told Karen she would, but rather went to the office and met up with Robin, who was still at work.

Robin asked Andi where her ring had gone, and Andi said she took it off, but didn’t explain further. The two started drinking and laughing — why not leave and go to dude’s hotel? — and before they knew it, the bottle was empty, and they were kissing. 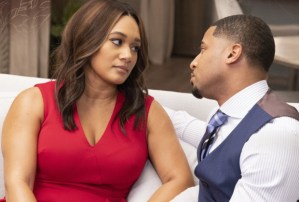 Elsewhere in the episode, Maurice invited “gay for pay” Q over for another rendezvous and sent Calvin over to Sabrina’s house. Danni finally came clean to Preston about needing her space, and he said he understood and would get his own place. Preston set the table for dinner before leaving and even ran Danni a bath, all to remind her that he’s a keeper. Hopefully, Danni is paying attention.

Speaking of paying attention, Zac visited Karen, too, and showed up in a fancy new suit, driving a shiny new car. Zac handed Karen an envelope with a check for all the money she spent on him over the years, and Karen thanked him. She said the happiness he had with Fatima looked good on him, and Zac thanked her — and this time, their goodbye seemed permanent.

Aaron asked Karen to marry him, and she refused to give him an answer. Zac, meanwhile, headed to Fatima’s and told her about his good fortune and said he wanted to take her out. He asked how she really felt, and they talked about trusting their instincts and building a future together as #TeamZatima.

What did you think of the Season 3 midseason finale of Tyler Perry’s Sistas? Were you happy with the choices all the ladies made? Grade the episode in our poll, and drop your thoughts in the comments.