HBO Max has renewed the subversive reality TV dating series FBoy Island for Season 2, TVLine has learned. Creator Elan Gale, a longtime producer of the Bachelor franchise, previously revealed that early casting for the new season is already under way.

The 10-episode first season, which saw Love Is Blind’s Sam Dean serve as showrunner — brought 12 “nice guys” and 12 “fboys” to the Cayman Islands in search of love and a $100,000 cash prize. The finale delivered a huge surprise when fboy Garrett decided to take the money for himself rather than stay in a relationship with Sarah and split the prize evenly. Host Nikki Glaser then revealed that Garrett would not see a penny of that money, and that the cash prize would instead be donated to a charity of Sarah’s choosing. 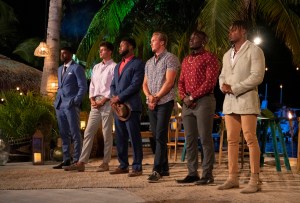 When FBoy Island returns next season, don’t expect to see the same twists from Season 1. “Season [1] undoubtedly kept the audience guessing, but we have even more big twists in store for Season 2,” Jennifer O’Connell, HBO Max’s EVP of Non-Fiction and Live-Action Family, said in a statement. “To the next batch of Fboys, beware, we’re coming for you!”

Glaser, who came up with the memorable “Fboy? F-bye!” catchphrase, will also be back as host for Season 2. “I couldn’t be happier about returning to FBoy Island for Season 2. The only downside is that it confirms my greatest fear: that there are more than 12 Fboys on planet Earth,” Glaser shared in a statement.

Gale has big hopes for the FBoy franchise, including adding LGBT+ contestants and building out several spinoffs. “My hopes are to create what I’m calling the ‘F-person Cinematic Universe, including Fboy Island, Fgirl Island and Fperson Hotel,” he previously said.

Are you ready for more FBoy Island? What do you hope to see in Season2? Sound off in the comments!