FBoy Island is the gift that keeps on giving.

HBO Max’s highly entertaining reality dating series wrapped its first season with yet another twist: If the women chose a “nice guy,” that couple would split the $100,000 prize evenly. However, if one chose an “fboy,” said guy can choose to either stay in the relationship and split the money, or break up and keep it all to himself.

CJ found her happy ending with nice guy New Jarred, as did Nakia with reformed fboy OG Jared. Meanwhile, Sarah chose fboy Garrett who immediately broke up with her and confirmed that he’d been playing a game all along. But in a shocking turn of events, host Nikki Glaser revealed that Garrett would not be getting any money and that the cash prize will instead be donated to a charity of Sarah’s choosing.

It’s a satisfying ending that series creator Elan Gale says was intended to make the audience feel good after watching the season.

“[We] wanted to make sure that the people who don’t learn anything learn a lesson, one way or the other,” Gale tells TVLine.  “We wanted to give them an opportunity to show reform, but we also wanted to be OK if they didn’t. We didn’t want there to be a way for an fboy to actually win the game. That would run counter to the ethos of the show.” 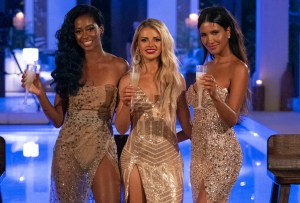 Gale has extensive experience in the reality-TV world, with producing credits that include 2008’s Cookin’ with Coolio and 2010’s High School Reunion, as well as current juggernauts The Bachelor, The Bachelorette and Bachelor in Paradise. He admits that FBoy Island, which aimed to hold fboys accountable, was an opportunity to explore the things he couldn’t with other, more established shows.

“What I wanted to do was look at, ‘What have I never been able to do before? What are the things… that were dreamed that were not relevant to the format that I was working on?'” he shares, noting that that meant directly addressing fboys rather than leaving it to subtext and using language that’s current.

FBoy Island made a strong effort to hold fboys accountable throughout the series, even sending them to “Limbro,” an outdoor hut with a tiny cot and football-sized rock to play with. Offering virtually no comfort, the area was both a punishment and opportunity for the guys to rethink their fboy-ing ways.

“We wanted to make sure that we were discussing and exposing fboy culture, but not necessarily applauding it,” Gale notes. (And in case you were wondering, those banished to Limbro don’t actually sleep outside and are fed real food. However, it’s not as nice as the living in the Grotto, where nice guys had a much more luxurious stay.)

FBoy Island producers had the tricky task of figuring out who their fboys and nice guys were, and those identifications were based mostly off interviews and testimony with each contestant. The show also put out two very distinct casting notices, allowing producers to choose from different pools of men. 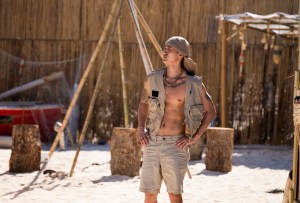 “The nice guys responded to something like, ‘Would you like to meet the woman of your dreams? Are you looking for forever love?’” Gale shares. “The fboys responded to language that was closer to, ‘Are you ready to party down with your bros and meet some ladies?’ People that respond to those types of things tend to fit, not always, but more likely to fit into one of those two groups.”

The show hasn’t yet been renewed by HBO Max, but Gale says casting for Season 2 has already begun just in case. He has high hopes for the series including bringing back host Nikki Glaser (who acted as the voice of the audience and came up with the “F-bye” catchphrase) and building a franchise.

“My hopes are to create what I’m calling the ‘F-person Cinematic Universe including Fboy Island, Fgirl Island and Fperson Hotel,” he says.

If given the chance, Gale also intends to make the show more inclusive by adding LGBTQ+ contestants. “It’s something that I think is imperative. [It’s] something that we are talking about, thinking about, and hopeful to get on as quickly as possible,” he concludes.

Did you agree with how FBoy Island ended Season 1? Grade the finale as well as the entire season below and let us know your thoughts in the comments.