Their anticipated one-on-one match in the series premiere brought a packed crowd to the Duffy Dome, even if the ending didn’t live up to expectations. (SPOILER ALERT: It lasted mere seconds and concluded with Jack going off script and injuring his brother in the ring to prevent him from going to the big leagues.

The brothers’ rivalry drives the show (airing Sundays at 9/8c on Starz), but it’s the peripheral characters who add interesting layers to the series. Crystal (Kelli Berglund), Ace’s valet and an aspiring wrestler, feels reminiscent of real-life wrestlers like Chyna, Trish Stratus and Lita — women who’ve had to navigate sexist attitudes in the male-dominated business. (They all began their WWE careers as valets before finding even bigger success as solo wrestlers.) 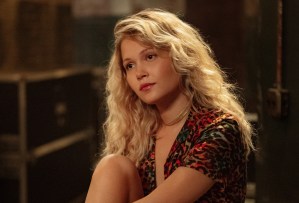 Heels makes it clear in the first episode that Crystal is eager to get in the ring and be considered a part of that world, but she’s continually brushed off and isn’t even allowed to do her makeup in the locker room like everyone else.

“It’s tough for Crystal because she has such a love for this world,” Berglund tells TVLine. “We see there aren’t any women wrestlers in the Duffy Dome as of now, and she’s happy that she was able to get her foot in the door… Crystal knows a thing or two about wrestling, and she knows what she’s talking about, and I think she could totally hold her own in the ring. That’s her ultimate goal, to go beyond Duffy and her role as Ace’s valet and succeed as Crystal the wrestler.”

Outside of the ring, Staci Spade (Alison Luff) faces her own uphill battle as Jack’s wife, who often bears the brunt of his passion for wrestling. They’re behind on bills, and Jack isn’t always present when he’s… present. Although Stacy supports her husband’s dreams, she also isn’t afraid to call him out when he’s slacking on his family duties. 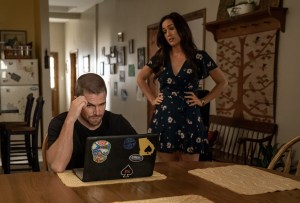 “The women in this series are the backbone of this community and the reason that this world ticks,” Luff explains. “[Staci] has this unwavering grace for her partner, yet is the queen of accountability and the queen of challenging her partner to be the best version of himself because she knows what he’s capable of, and nobody else can challenge that.”

Something Staci learns, she adds, is that “in order to take care of someone, you have to learn how to take care of yourself. I think it’s so easy for us women to constantly put others before us. We are nurturers, and I don’t think that that’s a weakness. I think that’s a strength, and that is definitely a strength that Stacy has. What’s really cool is we get to see her start to develop her own life and what that means.”