Warning: This post contains spoilers from grown-ish Season 4, Episode 6. Proceed at your own risk.

The road to antiracism within Black and white friendships can be fraught with confusion and misunderstandings. But as the latest installment of Freeform’s grown-ish proved, racial compassion and empathy can be achieved through honest discussions.

In case you missed this past week’s Episode 6, titled “Put Your Hands Where My Eyes Could See,” Zoey, Nomi and Jazz protested against police brutality alongside their friends. But when the trio returned home after an enforced curfew, Nomi said she didn’t understand why some Black protestors rioted and looted. In turn, Zoey questioned why Nomi was criticizing the oppressed and not the oppressors. When Nomi grew defensive, Jazz pointed out her white fragility. 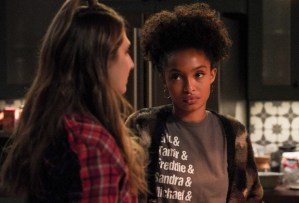 An offended Nomi called her mom to lament, and when Nomi’s mom mentioned that she had raised Nomi to be colorblind, Nomi argued that people of color want their colors and cultures acknowledged. Nomi’s mom took offense, and then Nomi realized she had done the exact same thing to her friends and ran to thoughtfully apologize to them.

Emily Arlook, who plays Nomi, says the episode has made her a better white ally. She also appreciates the heavy emotional lifting of star and executive producer Yara Shahidi, who plays Zoey, and Chloe Bailey, who costars as Jazz.

“I’m so lucky as an actor that I get to work with such talented women in Chloe and Yara,” Arlook reveals to TVLine. “And to do those scenes with them and share that type of storyline, was a privilege for me.”

Arlook says white people should be having antiracism discussions with their besties of color.

“These conversations should be happening within friend groups,” the actress adds. “If there is a white person in the friend group, who has a total blind spot to what’s happening in the world, hopefully this episode can shed some light on how those conversations can go. And I was so grateful to be a part of it. Sometimes it takes talking to somebody else and saying, ‘Oh. I hear myself.'” 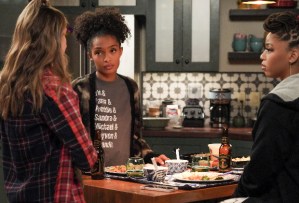 Bailey, who says it was all hugs and love between takes, adds that she’s proud to be a part of grown-ish because the collegiate sitcom fearlessly tackles heavy topics such as the racial reckoning, colorism, the prison industrial complex and the Black Lives Matter movement.

“I still remember shooting this episode, and it just made me really appreciate the writers and the cast,” Bailey shares. “We were able to show what it’s like having an open dialogue about things that make us feel uncomfortable. It’s OK to speak up for yourself and let your friends know how they’ve made you feel. Hopefully, the friendship is strong and great enough for the friend to receive it like Nomi did.”