The following contains spoilers from the first three episodes of Titans Season 3.

Three episodes into its third season, which premiered Thursday on HBO Max, the Titans learned that Jason Todd has in fact left the building, so to speak, and that his new persona, Red Hood, is a duplicitous force to be reckoned with.

Episode 2 of the new season closed with Dick Grayson/Nightwing realizing that new nemesis Red Hood is Jason, who in the season opener was brutally murdered by the Joker (prompting Bruce Wayne’s retirement as Batman). In Episode 3, the Titans debated how to handle this unexpected turnabout (and puzzling “resurrection”), with Hank, for one, champing at the bit to show no mercy for their estranged ally. 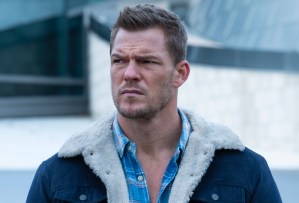 But then a seemingly distraught Jason privately phoned Hank, inviting him to the abandoned Gotham City Gym to talk. There, Red Hood got the jump on Hank, later sending him back to the Batcave with a bomb implanted in his chest, its countdown timer pegged to his heartbeats! Upon realizing the bomb was a Wayne Enterprises prototype, Dick tasked Connor with recreating the device so as to test a possible defusing. Dawn, meanwhile, obliged Red Hood’s ransom request by intercepting an armored car’s delivery of gold bars. But when she met up with him to trade for the bomb’s deactivator, an unmasked Jason insisted that she shoot him dead to get it. 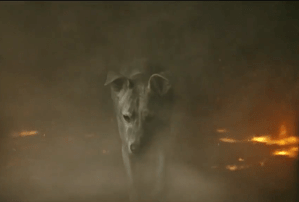 Dawn debated gunning Jason down in cold blood with the provided pistol, and an arriving Dick literally fought to keep her from pulling the trigger. But when Dawn eventually did… Jason gloated that, whoops, the gun’s trigger in fact was the bomb’s detonator! And before Connor could superspeed up to bedridden Hank with a finally discovered fix, the hero also known as Hawk — played  by Alan Ritchson, who now is headlining Amazon’s Jack Reacher series — was blown to smithereens. Connor arrived on the scene just as the bedroom went boom, with only an impervious Krypto trotting away from the flames alive.

Teasing the aftermath of Hank’s incredibly tragic death, Curran Walters, who plays Jason, told TVLine, “Obviously, the Titans are not going to like me much anymore! They feel betrayed by me, and want to get back at me for this. And we explore that.” 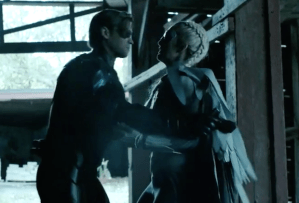 But is the Jason they once knew and fought crime alongside not exactly to blame…? Walters hinted that “Jason doesn’t even know who he” at the time he reveled in Dawn’s unwitting mistake. “In a sense, he is brainwashed, and throughout the season he’ll start to realize what he has done, and then deal with a new level of trauma.”

All of which does bring us back to the question of how Jason is even alive, given that Bruce himself saw his longtime sidekick’s dead body. “Superhero shows, man…. Am I right??” laughed Walters. But maybe Jason himself doesn’t even have the answer.

“He doesn’t know how; he’s like, ‘Whoa, how did I get back?'” Walters shared. “It’s an interesting concept to explore, and not a lot of superhero shows get to explore a post mortem like that. It’s exciting, and I’m very blessed to be a part of this insane story.”

Reflect on the edge-of-your seat hour as a whole, Walters raved, “This episode is absolutely nuts, and everybody I talk to, it’s like their favorite episode.”

Then looking ahead to Season 3 as a whole, Jason’s portrayer said, “We really dive into every single character — even with the new characters like Barbara (played by Savannah Welch) and Jonathan Crane (Vincent Kartheiser) and Blackfire (Damaris Lewis). We explore everyone’s relationships, which is a lot to tackle, but having these great writers on our team, we are able to do that.”