Stargirl was fixin’ for a fight in the Season 2 premiere of the CW superhero series, and by the end of the hour, boy did she find one!

But first…. The new season opened with a flashback to “Decades Earlier,” where a young girl named Rebecca was forbidden by her mom from attending a friend’s birthday party across the street. When a (creepy af) little boy named Bruce appeared out of nowhere and goaded Rebecca into ignoring her busy mom, the lass scampered across the street. There, Bruce nudged Rebecca to steal one of the presents piled outside the front door. Rebecca complied, then huddled behind a bush to unwrap the box. Inside, she found a doll with what a frightful face — but when she dropped it, we saw the doll was actually quite fine. Bruce then held up to one eye the black diamond inside of which Eclipso resides, and scolded Rebecca for being a “bad girl”…. 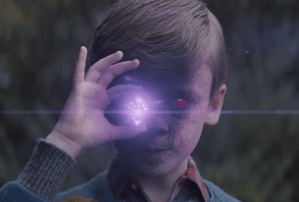 Cut to a short bit later, and Rebecca’s curious mom marches across the street, looks over to where her daughter had been huddled, and lets out a blood-curdling scream. And as the camera pulls back to reveal the mailbox, we see that the girl targeted by Eclipso was the daughter of… Dr. Charles McNider.

Explaining the horror-themed cold open — in which the mom’s scream blurs into the opening chords of Season 2’s jaunty “Summer School” title card — Stargirl showrunner and creator Geoff Johns says, “That first scene was purposely … both specific and vague at the same time because I wanted everyone to know there’s a tonal shift this season… and it is scary and it is dark. And then right away we go to ‘Summertime Blues’ and the kids patrolling at night, and there’s nothing going on and they’re all arguing about whether they should keep doing it. There’s a lot of humor and fun afterward, but it was important, I thought, to right away let you know that we’re going to get scary this season.”

Back in present day Blue Valley, months after the events of the finale, we see that with Icicle shattered into a million pieces, Brainwave, Dragon King and maybe also Cindy dead, Sportsmaster and Tigress in the clink, Grundy bested and the Gambler dismissed as “a wimp,” there was no Injustice Society left to fight, so things were a bit quiet during the JSA’s evening patrol. Court was so anxious to swing back into action, the next day at school she flipped Artemis in the cafeteria, after thinking that the supervillain spawn was attacking her with a field hockey stick. Courtney was dragged into the new principal’s office for a meeting with Barbara and Pat, where parents and child together discovered that Courtney had failed both history and English, and thus would have to attend summer school — necessitating the cancellation of a family trip to Yellowstone. 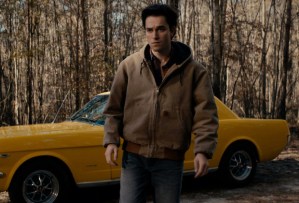 The other JSA kids didn’t have it easy, either. Yolanda is feeling tremendous guilt about her role in Brainwave’s death, and even nearly spoke about it at confession. Beth stumbled across her parents’ petition for divorce, as well as struggled to reconnect “Chuck” to her goggles; instead, she only made contact with someone who didn’t recognize her. And when he isn’t being accused of cheating on an exam, Rick is sneaking off into the woods to deliver copious amounts of junk food to… onetime adversary Solomon Grundy, we presume?

Elsewhere, The Fiddler’s son, Isaac, is skulking around school… Pat unwittingly took on a “partner,” Zeek, at the auto body shop, and he promptly got wise to (yet was unfazed by) the robot’s existence… Cameron resurfaced, in the wake of his father’s death (how did the papers explain that one?!), to paint a downtown mural in honor of his dad… and the “late” Sylvester Pemberton showed up at the diner where Pat Dugan’s ex-wife Maggie works (hi, Alicia Witt!), seeking the 20 on his stripes-loving pal…. 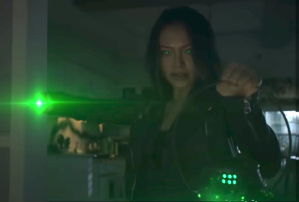 Stargirl found the action she was looking for when late one night she heard a noise at home, creeped down the stairs with the Cosmic Staff in tow, and got into quite the tussle with a young woman who had grabbed the Green Lantern and declared herself to be its owner’s daughter. The skirmish that followed, rife with blasts from both the staff and the young stranger’s green ring, did a real number on the Whitmore-Dugan kitchen, until an arriving Barbara and Pat put an end to it.

Once the dust has cleared, how will Court react to meeting Jenny, the actual legacy of OG JSA member Alan Scott?

“One of Courtney’s main struggles this season is swallowing the fact that what she thought was her destiny, Starman being her father, isn’t,” portrayer Brec Bassinger tells TVLine. “It’s still a fresh wound.”

As such, when she gets to know Jenny, “who really is a superhero’s daughter, and who seems to have everything together, I think there’s an instant ping of jealousy, which is not a normal feeling for Courtney,” Bassinger says. “I don’t think that’s something she faces a lot, so it’s something she struggles with when first meeting Jenny. But as you know, superheroes prevail!” 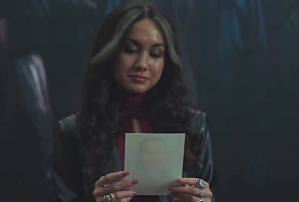 The premiere ended by revealing to us that Cindy is fact alive and well, and strutting through the after-hours halls of the high school, where she fished out of her locker a file marked “INJUSTICE UNLIMITED,” before slipping away into the tunnels and the ISA’s dusty HQ. There, she regarded photos of potential recruits Artemis, Isaac and Cameron… as well as Courtney’s brother, Mike. She then held the back diamond to her right eye, and we heard Eclipso’s ominous voice say, “I am ready to serve you….”