Voiced and eventually played by Nick Tarabay (Spartacus, Arrow), “Eclipso is an amazing character, for those who don’t know,” showrunner and Stargirl creator Geoff Johns noted at a recent presser. “He’s from the ’60s and he’s more of a demonic force in the same vein as, like, a Freddy Krueger or a Pennywise. And to have the kids and the adults go up against something like that this season — something that gets inside their heads and tries to expose their fears and their regrets and their guilt and use it against them — is very perfect for somebody like Stargirl.” 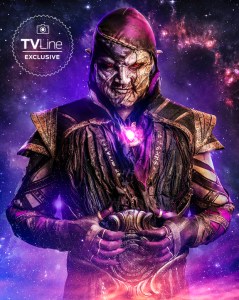 Courtesy of The CW

Eclipso’s mind-forking skills will also prey on Stargirl’s superfriends and family. “[Eclipso] allowed us, too, to delve into Yolanda, who has a really personal and powerful storyline, as do Rick and Beth … and Pat and Barbara and Mike. Eclipso allowed us to crack them open.”

Yet while “cracking open” the good guys is plenty ominous, don’t worry about The CW series losing its trademark spark, when Season 2 arrives this Tuesday, Aug. 10 at 8/7c. “It was tough to balance that tone, because we didn’t want to not be Stargirl,” Johns shared. “But at the same time, we wanted to take some challenges and lean into a bit of the horror element, the suspense element. And I’m hopeful that we’ve balanced it right.”

In the Q&A below, Stargirl lead Brec Bassinger sheds further light on what to expect from Eclipso and his caretaker Cindy, The Shade and one secret-keeping ally.

TVLINE | How is the superhero game going after you all took down the ISA?
BREC BASSINGER | So, Season 2 picks up about six months later, and Courtney is full-on full-fledge Stargirl. She’s turning up every single rock to try to find some trouble, but after stopping the ISA, there’s not much trouble — until there is, dun-dun-dunnnn! 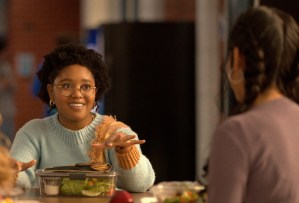 TVLINE | While Courtney, Beth (Anjelika Washington), Yolanda (Yvette Monreal) and Rick (Cameron Gellman) are trying to find crime to fight, what other things are going on in their respective minds? What sort of issues are they dealing with?
Something I love about Season 2 is that while they still have their superhero duties, they are all dealing with their own mental battles. Like, at the end of Season 1, Courtney finds out her father isn’t really Starman, so that’s something she’s having to kind of swallow…. Wildcat was very heavily involved in the death of Brainwave, so she feels a lot of guilt and remorse…. Beth Chapel lost her goggles, so she’s trying to fix the “Chuck” A.I…. And Hourman, he finally had his big battle with Solomon Grundy and then let him go, so he has this new, emotional battle that he’s having to deal with. And all of these things everyone is feeling only gets amplified, considering our season villain is Eclipso, who feeds on human darkness and emotions. It’s very ironic that he’s finding this group of four in these hard times. 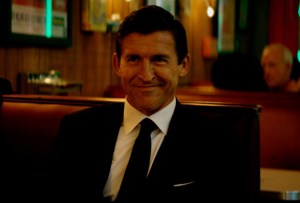 TVLINE | In addition to Eclipso, of course, The Shade (Jonathan Cake) is going to be showing up. Since Courtney is champing at the bit to swing into action, preview her reaction to his arrival.
Yeah, this is something I really love about Courtney, because even though she’s, like you said, champing at the bit for a new villain to face, she still always looks for the good in people, even if it’s a villain. She has a very interesting first few encounters with The Shade, just trying to figure him out, because he’s a very dynamic villain. Even though she’s wanting a supervillain to face, she’s still sticks to her core and always looks for the best in people.

TVLINE | When Pat (Luke Wilson) first informs Court that The Shade in town, her reaction is pretty adorable. She’s positively bursting.
Oh my gosh, oh my gosh, yes, exactly! She’s so excited. I feel like one of Courtney’s favorite things to say is “I told you so,” and the whole time she’s like, “There has to be someone out there, there has to be,” so that’s like a double win for her. She gets a supervillain to face as well as gets to tell Pat “I told you so.”

TVLINE | Cindy (Meg DeLacy) is back from her quote/unquote “time abroad.” What sort of agenda does she have?
Yes, her quote/unquote “time abroad.” [Laughs] As you saw at the end of Season 1, she found the black diamond, and she has very mysterious intentions with it. None of the JSA really know the full powers of the black diamond, and I don’t even think Cindy does, so throughout the season you kind of figure out more of what her plan is and what her intentions are. 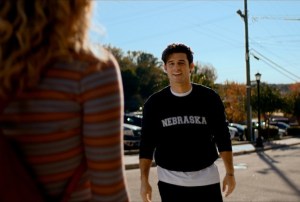 TVLINE | A reader wrote my column asking if we’re going to start getting hints of romance between any of the young characters. What can you say on that front?
Well, in Season 1, as you saw, Courtney and Cameron (Hunter Sansone) definitely had some chemistry, but it’s a slow burner. It keeps going for Season 2, but it’s a slow burn, a slow burn. 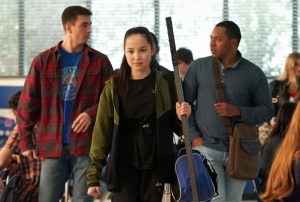 TVLINE | Besides Cameron, what other secondary characters will we learn more about in Season 2?  Maybe Artemis?
Well, Sportsmaster and Tigress are in jail, so Artemis (Stella Smith) feels like she has to find vengeance for her parents, yeah….

TVLINE | When Stargirl was announced as CW-only for Season 2, there was some concern, “Oh, they’re going to have to tighten the purse strings.” “Oh, they’re going to have to rein in the budget.” But as I’m watching these first few episodes, I feel like each one features some great new, visual effect. Have any of those VFX especially blown you away?
In the very first episode, there’s some really cool stuff between Green Lantern’s daughter (Ysa Penarejo) and Stargirl. It’s so funny because I get to see it through the process, so I saw the first cut before there was any sound mixing, sound effects or visual effects ,and then skip forward three months to the final product, and it just blows my mind. I was telling my boyfriend it is actually insane how much those visual effects and sound add. Every time Geoff [Johns] shows me something, it’s like a joke between us, because he always gives me a disclaimer, like, “This isn’t the finished product…,” and every time I watch it, I’m like, “But Geoff, this is still so good.” And then I see the finished product and I’m like, “OK, I understand your disclaimer, this is awesome.”

TVLINE | They really go all in with the Green Lantern stuff, and with the effect used to create another new character, I was like, “I can’t believe this is a CW show.”
I know! And I give so much credit for that to Geoff. Coming into this season, he wanted to make sure we didn’t lose any of that “piz-zow!” we had in the first season, so there were a lot strategic decisions he made that allowed us to keep the value of our show. 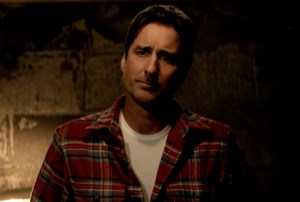 TVLINE | Lastly, how are things going with Court and stepdad Pat? It seems like he might be not quite telling her everything about the JSA’s past….
Yeah, Pat has a really big secret, and I feel like Courtney has good hunches. I feel like she’s onto it, but this secret, it’s a big one. And talk about a slow burner! You’ve got to hang on to find out what it is.