Countess Gabriele Von Blerkom doesn’t arrive in Schmigadoon! until Episode 5, but portrayer Jane Krakowski had been involved with the Apple TV+ comedy since its inception.

“I was lucky enough to be a part of the whole reading process… as the show was still being written and molded and created,” the 30 Rock vet tells TVLine. “It was a show that I loved the minute I read it, and then I met with [co-creator] Cinco Paul. I learned of his love of musicals, and the love with which he was going to [infuse] the show, and I wanted to be a part of it no matter when it got filmed — pre-pandemic, post-pandemic, whenever it was going to happen.”

The Countess — aka “Blerky” — is a rich debutante based on the Baroness from The Sound of Music… and may or may not be a Nazi. (Spoiler alert: She’s totally a Nazi.) Her character returns to Schmigadoon after an extended absence to find that her husband-to-be, Doc Lopez (played by Jaime Camil), has fallen for his new nurse, Melissa (Cecily Strong). We watch as Blerky pretends to befriend Melissa, then drives her out of a town in order to have Doc Lopez all to herself.

Along the way, Krakowski belts out “I Always, Always Never Get My Man,” which is as much a song about her continued bad luck with the opposite sex as it is a declaration that she’s not going to forfeit Doc Lopez to “the help.” It’s one of Schmigadoon!‘s shorter show tunes, but required a certain amount of choreography that those involved assumed would prove impossible, given the limited space afforded to the Tony Award-winning performer.

“Due to COVID and rehearsal restrictions, [choreographer] Christopher Gattelli and I had about two hours together where we discussed what we would both hopefully like to achieve from the number,” Krakowski says. “We actually rehearsed it on two folding chairs, literally at an office somewhere. And I kept asking, ‘What day am I going to get in the car?’ Because the car, and what my limitations would be in the car, seemed like a very important part of it to me. We got maybe an hour in the car, and it was so small that they were worried about [what I’d be able to do]. 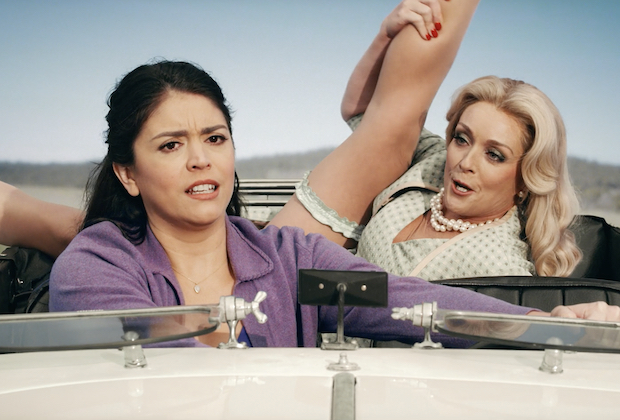 “During one of our very brief rehearsals, I said, ‘I was hoping to do, like, a backflip, and do the rest of the choreography in the backseat,’ and I just did it,” she recalls. “We were very lucky, because they were actually looking around to get a bigger car so I could [move around] more, [but] my 5-foot-4 body fit perfectly in the backseat of that convertible. It was the right height for me to do any gymnastics I could do without any straining. Plus, it was a gorgeous car.”

Though her screen time was limited, Krakowski appreciated her number — “a little boutique, 11 o’clock number [that fit] my sense of humor,” she says. “The fact that she starts [singing] with just one hand off the wheel, then suddenly she’s speaking with both hands off the wheel and it just keeps going, as if she’s fully driving when she’s literally not even in the front seat, is of great humor to me. I said, ‘Let’s go as far as we can with this number'” — and that they did.

Were you tickled by Krakowski’s role in the penultimate episode of Schmigadoon!? Vote for your favorite song below.