LaVerne “Jukebox” Ganner is a fascinating and complicated character on Starz’s franchise prequel Power Book III: Raising Kanan. And Hailey Kilgore, the Broadway actress who plays her, hopes fans can accept and embrace her beyond being gay.

The crime-family drama will further explore Jukebox’s blossoming relationship with Nicole (played by Annabelle Zasowski, Divorce), a rich white girl she met in choir, when the show airs this Sunday at 8/7c. That said, Kilgore and series’ creator, Sascha Penn, pushed to make sure the exploration feels fleshed-out and layered to delineate where LaVerne stops and Jukebox begins.

“I worked really close with Sascha and all of our directors when it came to Jukebox’s sexuality,” Kilgore thoughtfully tells TVLine. “It was something that I wanted to handle with care. When you’re in a role where you get to play someone who has a specific characteristic, on television and film, there is a strong responsibility for how that character is portrayed. 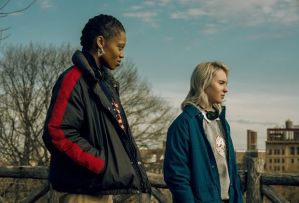 “And what I didn’t want for Jukebox was for her sexuality to become a personality trait,” Kilgore adds. “That’s a part of a person, but that doesn’t make them who they are. I said, ‘Let’s proceed in this way and keep it authentic,’ and Sascha was so collaborative. I hope I did it justice.”

The Texas native, whose previous TV credits include The Village and Amazing Stories, also says she wanted to honor Anika Noni Rose’s groundbreaking turn as Jukebox. It’s an ancillary role the Tony Award-winning Rose impressively pushed to the forefront in Seasons 3 and 4 of the original Power. Jukebox was Kanan’s closest relative and ally, and Power Book III: Raising Kanan establishes the backstory of their cousin/sibling bond, making Kanan’s (executive producer and star Curtis “50 Cent” Jackson) eventual choice to kill her in Season 4 all the more tragic.

Kilgore, who watched Rose’s performance, says although she knew the undertaking wouldn’t be easy, the hard work would prove worthwhile.

“I’m a huge Anika Noni Rose fan because I’m convinced I was Princess Tiana in another life,” Kilgore says with a chuckle referencing Rose’s 2009 history-making voice performance in Disney’s The Princess and the Frog. “I’ve always loved her. After I got the role, I watched her play Jukebox again. But pretty early in the process, I had to let adult Jukebox go.”

Letting go allowed Kilgore to bring her own flavor and ideas to the part, she says. One example, in the upcoming Episode 4, is how Jukebox views crime and why she boosts stolen goods. Her musical aspirations are also unpacked.

“The fun part is, I get to bridge the gap between the Jukebox that Power fans all know and love — and are scared of — and younger Jukebox.”