The following contains spoilers from the Physical Season 1 finale.

As Season 1 of Apple TV+’s (already-renewed) Physical came to a close, the hits kept on coming for housewife-turned-wannabe aerobics queen Sheila Rubin.

The finale started out positive enough for Sheila, who with Bunny led a rousing demo of their aerobics class at the mall’s center court, while Danny and Greta slipped campaign literature into each eagerly purchased VHS tape. The high-energy stunt, though, failed to give Danny’s bid for state assembly the boost it needed, and Republican contender Mike Schmidt instead was declared the winner that night on TV.

“This is what you tied yourself to — old ideas and unpopular, unwanted, tired, big, fat losers,” Sheila’s internal monologue grumbled, as she surveyed her deflated husband and his backers. “That’s you, right here, right now, weighed down, sunk, done.” 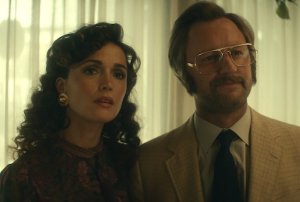 Reflecting on Sheila’s reaction to Danny’s failed bid, Rose Byrne tells TVLine, “You heard it in her voiceover. It’s a turning point. You see it in Danny’s face, and you see it as she walks out of the party. She’s kind of on this high of fury and fear, and she’s back to a terrible pattern again. It’s not a good thing. She’s going to self-destruct.” 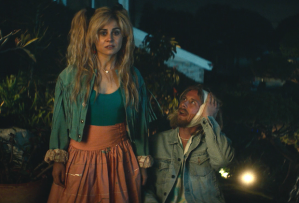 Indeed, prior to the election results coming in, Sheila had been confronted by Bunny and a very recently operated-on, bandaged Tyler. Having read the local paper’s Bunny-less coverage of the mall event, they wanted to make sure that rising star Sheila wasn’t leaving them behind — ‘specially since the uninsured lovebirds have medical bills to pay. (Their insecurity was not unwarranted, seeing as, unbeknownst to almost anyone, Sheila had taken a meeting with a big-time home video magnate.)  “It was coming at Sheila from all sides,” Byrne notes of the Bunny/Tyler drama. “Again, a really tense episode.” 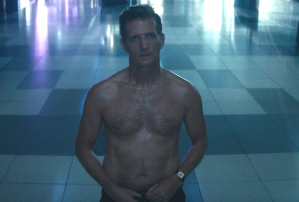 As Danny’s campaign got walloped with the big “L.” a spiraling Sheila made a mad dash to scarf down a platter full of cream puffs, but was derailed by Greta and Ernie’s powder room hookup. She instead retreated to the closed mall, where she spied John Breem running laps up and down the escalators. With Sheila standing by the railing above, the two locked eyes. A sweaty John tugged off his shirt, loosened his belt and reached down to pleasure himself… and Sheila mirrored his actions, building to a rapturous, eyes-rolling-back climax for at least the latter.

Invited to explore the unusual, not-quite-physical affair, Byrne says,”There’s so much between them in terms of distance, literally, in the scene. But he’s so trapped, and this is kind of his only way to express it.”

And as for Sheila, “You finally see her — for want of a better expression — have some sort of release, and some kind of moment of connection with him. He’s really an unreachable guy in so many ways, so this is sort of a way around that, I think… It’s a bit surreal,” Byrne observes.

The intensity of said encounter was jarringly interrupted by a quick cut to that “flash forward” of Sheila’s super-glam, aerobics queen self. But with Danny not Sacramento-bound, and Sheila’s dream of living her own, semi-separate life in San Diego thus effectively dashed, what will be her next move in the newly ordered Season 2?

“I see so many things that could unfold…,” the Aussie actress muses. “I always hold on to that quote, ‘Success doesn’t change who you are. It reveals who you are.’ And I’m curious to see how much more will be revealed.”